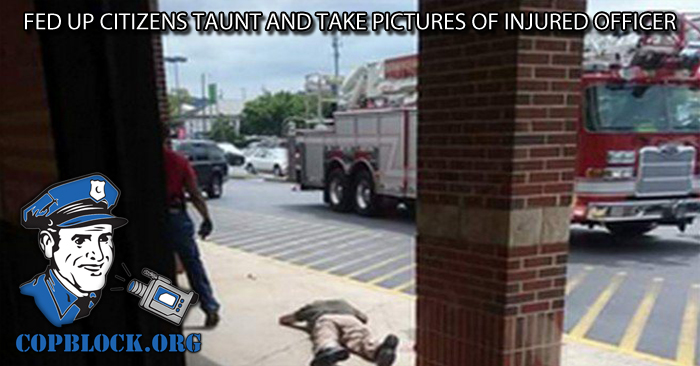 This is an update to the story I brought to you earlier in the week about the Alabama officer that was knocked out after a fight with a suspect and the bystanders took pictures instead of helping.  Fed Up Citizens Taunt and Take Pictures of Injured Officer.

According to a report by New York Daily News, the still unidentified officer has stated that he did not shoot the suspect out of fear of being the next vilified cop making national headlines for shooting an unarmed black man.  It is reported that the suspect exited his car and moved in on the officer, sucker punched him; knocking him to the ground, before gaining control of his pistol and striking him in the head numerous times.

FOP President Heath Boackle had this to say:

“If the officer would have pulled his weapon, we would be talking about a totally different story,” Boackle said. “They’re so afraid that what’s going to be portrayed of them isn’t going to be the whole truth of the encounter.”

“They’re losing these confrontations,” he added. “He who hesitates is lost.”

The statement that he didn’t shoot the suspect out of fear of media and public back lash is interesting.  If that was going through his head during the exchange, that means that he never considered another means of neutralizing the suspect and his first thought was to use his gun.  Are these officers not trained in self-defense?  Are they not trained in deescalating a situation?  This was a felony stop, so where was his backup?  Why would a seasoned officer attempt to take a potentially dangerous suspect into custody on his own?

I am in no way saying that this officer did anything criminal or that he was out to lynch a black man.  I also understand that he was in plain clothes and in most probability didn’t have some of the other less-than-lethal tools at his disposal that uniformed officers have.  After all, the suspect was being investigated for a string of local burglaries.  I do think that he broke from basic police protocol by not waiting for backup and that is what put his life in danger and what ultimately led to the injuries that he sustained.

His fear of being treated as a racist cop killing a black man is not the issue here.  The issue is that he placed himself in danger by his actions.  Did he deserve to get beat down and left bloody in the street?  No, he did not!  It can be justifiably assumed that he didn’t follow procedure and the excuse of his media fear is nothing more than an excuse to cover up that break in protocol.

If it is true that he was fearful of media back lash, then police are getting the message.  They’re starting to actually hear the public that are sick and tired of police shooting first and asking questions later.  Law enforcement is finally seeing that they are under a microscope of public scrutiny.

As more and more officers wake up to this fact, they now need to figure out a solution.  Their scripted statements after an officer involved shooting of, “I was in fear for my life, or he went for my gun,” are now falling on deaf ears just like the little boy in the Boy Who Cried Wolf.  Too many of those shooting involved unarmed civilians and even ones that were fleeing rather than attacking an officer in any way.

“There are bad apples in any profession you choose.  You can’t put us all in there because 99 percent of law enforcement officers across this country are doing this job because they want to make a difference.”

My opinion is that this officer may very well be the victim of the amount of cases involving bad officers making the wrong decisions that has swayed public opinion.  Those officers that are guilty of horrendous actions have not only put citizens in danger, but also those officers that are out there doing the right thing.  This is why these officers need to step over that thin blue line and get rid of the bad cops.  They only have themselves to blame for the cover-ups and backing of officers that they know are in the wrong just because they are brothers in their field of work.  Until that accountability of their brothers becomes more common practice, the situation only stands to get worse.

I do feel for this detective’s family.  They were made aware of what happened to him from the barrage of posts on social media.  No one wants to learn that one of their family members was a victim of violence in this manner.  With that being said, now this officer and his family has a feel for what so many families have experienced after getting news of one of their family members falling victim to an out of control officer.  It may not justify what happened, but it gives them a dose of reality of what so many have endured at the hands of police.