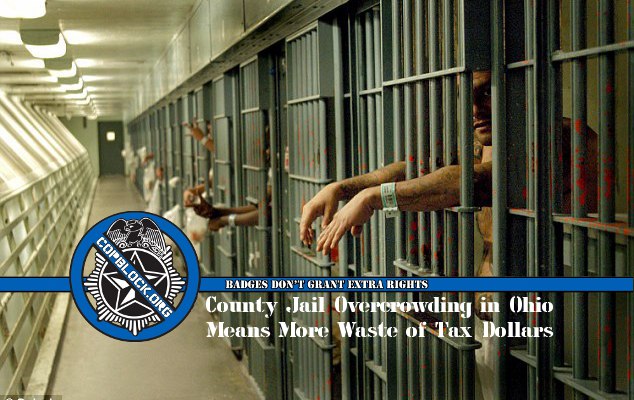 County Jail located in St. Clairsville, OH is currently experiencing an over crowding problem.  The county commissioners, Sheriff Dave Lucas, and several of the county judges met recently to discuss the over crowding with hopes to find a solution to the problem.

The jail population began to grow about three years ago, but then the number of inmates exploded after Sheriff Lucas took office in January of 2013.  Lucas has made headlines over the two years that he has been in office for his department making mass arrests in prostitution stings and drugs.

A solution that is now being thrown around falls on the hands of the county tax payers.  They now want to build another facility for those caged for misdemeanor offenses.  Currently they are housing inmates in neighboring Jefferson County Jail.

How many of those offenses are for victimless crimes where there was no violence involved?  How many of these incarcerations are for civil violations?  It seems to me that the real problem with the overcrowding involves jailing citizens for minor offenses.

In compliance with Section 341 of the Ohio Revised Code, the Belmont County Sheriff is empowered as the keeper of the County Jail. The Belmont County Jail is a one hundred forty-four (144) bed, full-service jail. It can house one hundred twenty (120) male prisoners and twenty-four (24) female prisoners at any given time. Prisoners confined in the jail include those charged with every type of criminal offense from the most minor traffic charge to those facing capital punishment. These include Prisoners awaiting trial or sentencing, transfer to a state institution, fugitives awaiting return to other states, and those inmates awaiting probation or parole revocation. The Belmont County Jail provides services for the Belmont County Sheriff’s Office, police departments countywide, and other federal agencies. The Belmont County Jail is currently operated under the direction of Jail Administrator Brent Carpenter.  The staff consists of four (4) Jail Sergeants and twenty (20) full-time Deputy Jailers.  The Belmont County Jail is medically equipped to handle minor emergencies in-house with the assistance of a medical staff consisting of four (4) nurses and a 24-hour on-call doctor. Major emergencies are handled by the jail physician in conjunction with a local hospital emergency room.

Rather than reevaluating which inmates truly deserve to be housed in the jail and maybe lowering the jail’s population, they just want to build more cages at the expense of the tax payer.  Take note that in the above snippet from their website, it clearly states that the population includes those charged with every type of criminal offense that includes minor traffic charges and those awaiting trial.  This clearly demonstrates that a real part of the issue is due to an abuse of the justice system that is caging citizens for trivial offenses as well as those that haven’t even been proven guilty in a court of law.  Those inmates are just unfortunate enough to be victims of ridiculous bail amounts and not being able to pay them.

In a story published by WTRF:

In an effort to take a proactive approach, the commission met with jail officials and county judges to come up with ideas. Those ideas include using other facilities, adding more staffing for house arrests, and building a new facility.

“We are looking at building a misdemeanor facility,but in the perfect world that’s two years out and we are faced with the gravity of the situation that is at hand, so the commissioners task is to take a look at how much we can budget to house prisoners out of county, Belmont County Commissioner President Mark Thomas said. “The short-term versus the long-term issue of where we will go with new facility.”

It boggles the mind to see that according to the WTRF story that they have not even considered that a big part of the problem is their own abuse of the legal system.  How about they let out the inmates that are not a danger to the community and have only broken what can only be viewed as victimless crimes?

The overpopulation of jails is a nationwide problem and it all boils down to the same thing, money.  The current situation in Belmont County is a clear demonstration of the corruption in the current justice system beginning at the local level and reaching to the national level.  We are supposedly the freest nation in the world, yet we currently have the highest jail and prison population than any other country.

In closing I would like to say this, Commissioner Thomas, Sheriff Lucas, and the other officials that want a solution to this problem, stop wasting county resources on housing those that are not a danger to the community.  Stop housing prisoners for trivial offenses.  Your policies and poor management of the county are the true cause of the situation you now find yourselves in.  The taxpayers deserve better from their elected officials.  Maybe you all forgot who it is you work for.

Feel free to contact these officials and ask them why they don’t consider letting some of these people out of their cages that are not a threat to the community.  Please keep your calls and e-mails to these people professional.  I do not condone threats of violence or obscene communications.  We simply want answers about their waste of tax payer dollars and resources for victimless crimes.