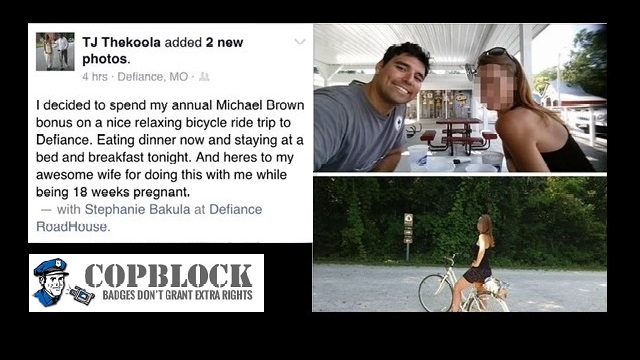 Officer Todd ‘TJ’ Bakula of the St. Louis County Police is under scrutiny after making a post in which he brags about spending his “annual Michael Brown bonus”, a reference to the massive amount of overtime police are accruing in an uphill battle to make a situation that they already made awful get even worse.

In the aftermath of the original tragedy local LEO overtime increased enormously and has remained high since. But just how high and at what cost to taxpayers?

According to the St Louis Business Journal, just responding in the wake of Brown’s killing in August 2014 cost St Louis County a reported $4m, including $2.5m in overtime for police work.” By January, the South County Times reported that St Louis County police had “put in 121,935 hours of work since the shooting, which amounts of $3.9m in overtime costs and $1.2m in fringes.”

‘TJ Thekoola’, as Bakula goes by on Facebook, posted the following statement to his wall about a taking a trip to a popular getaway destination forty miles outside of St Louis:

“I decided to spend my annual Michael Brown bonus on a nice relaxing bicycle ride trip to Defiance. Eating dinner now and staying at a bed and breakfast tonight.”

Overtime pay in public servants costs tax payers billions every year throughout the country. And in no profession is this situation taken advantage of and relished as much as by police. Overtime pay can often be double or greater an officers base hourly wage. That adds up quickly and cops are given ample opportunities to receive extra monies even when no extra patrol shifts are being added.

In most cases an officers presence in court cases for appearances on citations they issued is overtime. This gives police officers incentives to write pointless or unfounded tickets. When enforcing petty victimless crimes, regardless of the validity of the arrest by moral or legal standards, the opportunity to personally benefit in overtime for sitting around a courtroom becomes an enticing lure. The system was shambled together in such a way as  to allow law enforcement officers to profit if they play along. A costly expense, to be sure.

If those who complain that they could not afford far more competitive protection than public police were to discover how much they really paid police to do the piss poor job they d,o it would be game over. That is why you will not find any statistics that really illustrate all the ways that police cost taxpayers far more than they are worth. When you add in settlements, constant technological upgrade, militarization and a host of other costs, the numbers become almost unreal.