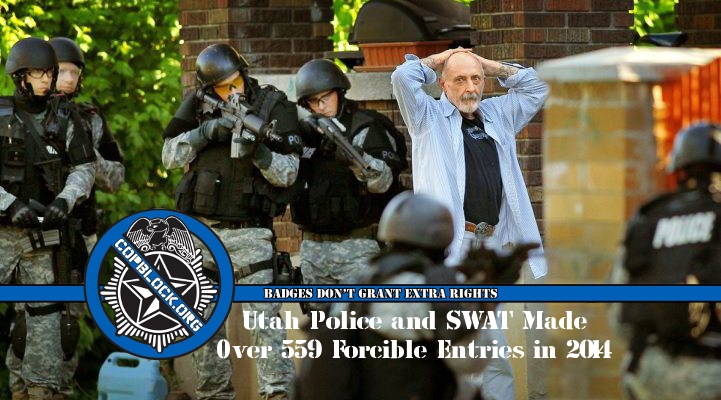 In an effort to increase transparency in policing, lawmakers in the state of Utah last year ordered a report on forcible entries by 168 police departments state-wide. Seventy-five percent of agencies provided information for the report, which includes data on 559 forcible entries conducted by 124 police departments. Salt Lake City/County police forces, called the Unified Police, registered the most forcible entries at 95, with some of the remaining larger counties clocking in around 50 each, and according to KSL,

The forcible entries tallied in the report include ones made while serving search warrants as well as SWAT team actions with or without warrants.

The report found that most of the forcible entries were drug-related, guns were recovered on only three occasions, and police killed three people in those 559 entries. This definitely brings some questions to mind, not the least of which is: Why is so much force being used in so many situations where people are not armed violent offenders who pose a real threat to the community? The President of the Utah based Libertas Institute, Connor Boyack, raises the point:

This report suggests to us that significant amounts of violence and force are being used in non-violent situations. That represents an opportunity for unnecessary harm or death to occur over infractions and alleged crimes that could be handled in a much less violent method.

Of course it is a valid question, one seemingly never to be reasonably answered by our political masters, but I’m thinking; Wait a minute, how is it that these guys can go around kicking in doors so often, armed to the teeth, ready for combat, and amazingly only kill three people in the process? Yet average street cops are killing people nation-wide at a rate of nearly four people per day? Even in the state of Utah, death by cop is the second leading cause of homicide. Utah police are responsible for more of the state’s deaths than gang members, drug dealers or child abusers, according to a report covered by the Huffington Post.

I was not surprised to find out that Utah is the only state in the nation doing a report like this, saddened perhaps but not surprised. *Since the introduction of S.W.A.T the number of forcible entries nation-wide has increased year over year, particularly bolstered by the manufactured wars on drugs and on terrorism, to tens of thousands yearly. Am I wrong in suggesting that we should have a comprehensive look at the use of this militarized police force occupying American soil? Will we get it? Probably not. Not before the police are fully federalized as that is the direction we’re headed.

Critics have argued for years that decentralized police administration fosters inherently poor-quality policing, tolerates racial bias, and makes it especially difficult to monitor and verify training and certification requirements across states. For many critics, federal intervention remains the remedy of choice.

We see yet again clear signs that police are becoming more violent to a less violent population. And a population less violent to police if you believe the FBI’s own numbers. But hold on to your hats because that trend is going in reverse unless police stop waging their war against the people, a war they cannot win. As the police push harder to assert their authority with excessive force, the people push back in ever growing numbers and with a much more determined approach. And as usual our leaders, if you can call them such, are choosing to do the opposite of what is proven to work, by taking the community out of policing, so the number of forcible entries and civilian deaths at the hands of state enforcers will rise before they fall again. So too will the number of dead cops. With an ever increasing likelihood of a major global collapse of financial markets inevitably leading to greater social unrest; there is no clear end in sight to the escalating authoritarian violence except to lay down arms. Something the people will not do.

*See: Overkill: The Rise of Paramilitary Police Raids in America and Rise of the Warrior Cop by Radley Balko