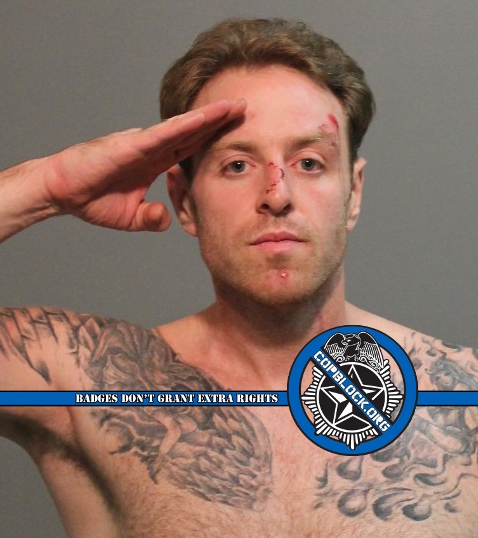 Joseph Parker was driving on Revere Beach Highway when he was pulled over for speeding. Although the exact details are unclear, the police claim Joseph got out of his car, stated he was recording them, proceeded to make comments in regards to Ferguson, then punched an officer in the face causing him to hit his head.

When other officers tried to restrain Mr. Parker, he fought them as well. During the fight the police say they deployed a taser five times with no effect, and Joseph kept up the fight even after he was in the back of the cruiser. The cops claim he took off his shoes, and started to kick the windows of the cruiser.

At this point I’m amazed they haven’t crossed him off, but we must consider the fact that Mr. Parker is white. I’m not usually one to bring race into my writing, but I’m not ignorant to the reality of systemic policing practices revolving around individuals of color.

After the ride to the station, the police state that Mr. Parker’s demeanor turned remorseful, but he again lashed out at the police, and began to fight with them. It took multiple officers to subdue him, and one cop’s leg was injured bad enough to warrant a visit to the hospital.

Joseph Parker pled not guilty to a plethora of assault charges, and has gone on record as saying he was having a negative reaction to medication.

Even after two fights involving at least seven cops, Mr. Parker avoided catching a hail of bullets, that would have almost certainly ended his life in favor of the safety of the officers. If he had been born with a larger quantity of melanin, you can almost guarantee this would have been his fate. His bail was also set at $25,000; relatively low for someone who just got done assaulting multiple police officers, putting at least two in the hospital.

In his mugshot Joseph Parker can be seen raising his hand in salute, as if to symbolize a service to those who have been struggling against the police, and their monopoly on the use of force.

Anyone quick to condemn Mr. Parker for using violence in his actions against the police should first consider this quote from the civil rights activist Malcolm X.

If the entire enterprise of policing is based on violence and the initiation of force than shouldn’t it be considered applied non violence when someone physically defends themselves against kidnapping, extortion, or any violation of their self ownership?

Everyday dozens, if not hundreds of new stories about police misconduct, brutality, and murder from all over the world are placed before your eyes. If we learn one thing from this, its that the institution of policing across the globe is corrupt on a foundational level, and there is nothing anyone who seeks to change it from the inside can feasibly accomplish, when undertaking a task of such magnitude.

We watch videos, and read news highlighting misbehavior in law enforcement, as well as the lack of accountability that often follows. (Understatement of the year.) In a climate of growing distrust and suspicion for law enforcement based on evidence of their own violence and misconduct, how long did the police think it would take before people started to treat them with the same aggression that is more often than not quickly distributed when anyone questions their arbitrary claims to authority?