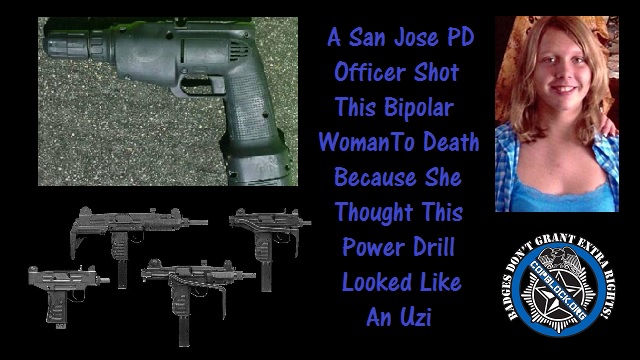 A lawsuit was filed on Friday August 14, 2015 by the family of Diana Showman one year after she was killed by San Jose Police officer Wakana Okuma. The 19-year-old girl suffered from bi-polar disorder and was holding a phone and a cordless power drill at the time she was shot.

On the morning of August 14, 2014 Diana Showman called local police, asking them if it was illegal for her to lie to them and threatening to shoot her mother and brother, who she claimed were locked in a room, if police did not respond.

Upon arriving, Okuma saw the disturbed woman exit the home and begin slowly walking towards her, waving the drill in the air. Okuma claims that the drill, which was black, looked like an Uzi submachine gun, so she shot Diana with an AR-15 rifle, killing her.

James and Victoria Caulfield-Showman, the parents of the deceased, claim that the officer failed to give their daughter any warning before firing on her. Furthermore, they are concerned that no crisis management skills were used to de-escalate the situation first, and that Okuma was unable to recognize the object as a drill, even though she had a high powered scope on the rifle she killed the young woman with.

The lawsuit is for damages, as Santa Clara District Attorney’s Office has already deemed the shooting to be legal, in a 57-page report in which they blame the color of the drill (black) for the death of the young woman.

It further went on to recommend that the drill pull up it’s pants, stop being a thug, and get a job; and concluded by admonishing black drills for drilling other black drills and suggesting that this made any violence against them by non-black drills and other assorted tools perfectly justified.