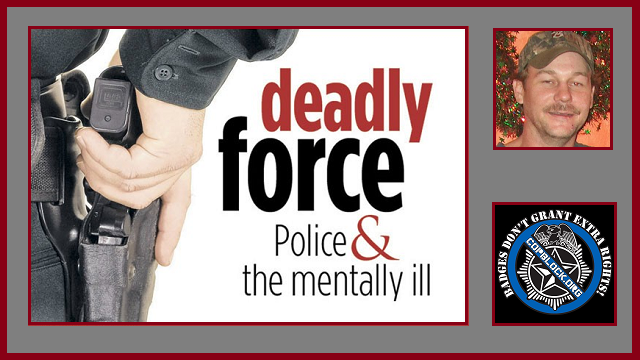 The following story was submitted to us by Patricia Tompkins, the mother of a mentally and physically ill man who was shot and killed in his home in Ardmore, Oklahoma. This is the story in her own words. Please help her to receive justice and peace by putting pressure on the Ardmore Police Department.

1) Eric Tompkins had been at the hospital from late Thursday night into Friday morning and was eventually diagnosed with pneumonia. He ask to be admitted but was refused.

2) Eric was suffering from depression. I had been in contact with Mental Services and was told there was nothing they could do. I was instructed to call 911 and then Mental Services could intercede.

3) On Sunday morning I called 911 per those instructions because I thought Eric MIGHT have drank roach poison.

4) Police responded promptly and found both Eric and I sitting in Eric’s living room.

5) The officers entered the house and Eric said he hadn’t drank any poison, didn’t need help, and didn’t want to go anywhere. Obviously Eric was very sick and weak from the pneumonia.

6) Eric stood up and was told to sit down and he complied.

7) I walked with the other officer towards the kitchen to show him the coffee cup that MIGHT have contained the roach poison.*

8) Before having the time to tell the story there was a shot fired.

9) I ran towards the living room and saw the officer standing over Eric in the front yard asking him questions and handcuffing him. He was lying on his side, then rolled onto his stomach and later rolled to his back. I saw the entire area and there was no weapon around nor under Eric.This all happened in a very short amount time – literally between one and two minutes or less.

10) Eric does not own a gun nor even carry a pocket knife.

*The cup with the possible poison is still sitting on the kitchen counter. Not even taken as evidence.

1) Since this was a possible roach poison ingestion and no mention of any sort of violence- did officers with the proper training respond to the initial call?

2) Since there was no evidence of any injury or violent behavior by Eric and he told the officers he had not drank any poison nor wanted any help and didn’t want to go anywhere with the police, why didn’t the officers leave the scene or at the very least back off and call for Mental Services to handle the situation? If they had done this Eric would not be at the Funeral Home.

3) This is Eric’s home and I believe everyone will agree you do have certain rights in your own home. It’s not as if Eric was standing out in the yard pointing a gun at every passing car. There was NO evidence of ANY violence at the home. He was sitting calmly on his couch.

The Police have released a statement that the officer saw – what he thought was – a gun. Even though I personally overheard the officer repeatedly standing over Eric saying “You had a knife right?” He said this three times. If the officer was asking about a knife, the big question is- how did the “gun” even came into play?

The police are trying to keep this story local.

We just want the truth to come out.

—Here is a link to the Facebook Page: Justice for Eric Tompkins—