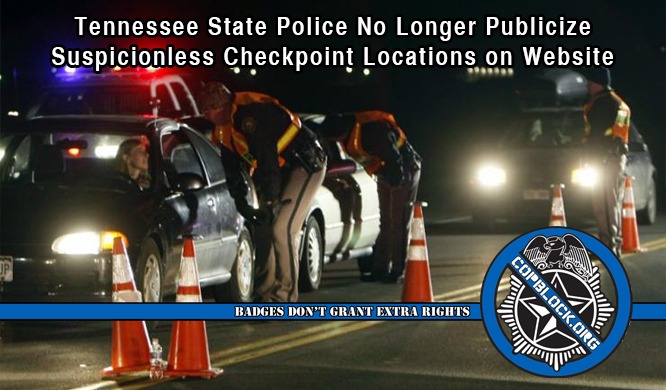 The Tennessee Highway Patrol is no longer posting their checkpoint locations to their website, seemingly after being caught too many times lying and violating the rights of drivers while implementing them. Time and time again, the Tennessee Highway Patrol has made headlines showcasing their outright dishonesty and blatant rights violations on motorists – mostly at checkpoints.

In November of last year, a driver recorded state troopers and local city police lying and breaking the law at a checkpoint stop conducted by the Tennessee Highway Patrol and the Murfreesboro Police Department. The video got over 200,000 views after it was uploaded and prompted the local media to seek responses from the Murfreesboro Police and the Tennessee Highway Patrol for their actions.

Also in 2014, the Tennessee Highway Patrol was caught on video arresting a man who had not committed any crimes at all, only because he didn’t want to show them his license without probable cause. Cop Block’s own, Pete Eyre, originally covered the story and uploaded the coverage to Youtube where it immediately went viral and gained the attention of Tennessee news outlets, including Fox 17.

In 2013, a video was uploaded to youtube of a driver being harassed at a checkpoint on July 4th that was conducted by the Tennessee Highway Patrol and the Rutherford County Sheriff’s Office. In the video of the stop, the driver is yelled at, ordered out of his vehicle, searched for drugs, searched for weapons, has his car ransacked because of a false K-9 alert (captured on video), all because his window was rolled down just a few inches.

Starting in 2011, the Tennessee Highway Patrol welcomed with open arms the federal government’s VIPR (Visible Intermodal Prevention and Response) program, where the state troopers bring the TSA out of the airports and onto the highways to conduct random searches and seizures of drivers without probable cause.

The Tennessee Highway Patrol is known by citizens all across the state for their unconstitutional principles. They increasingly conduct these constitution-free zones where they regularly extort motorists and search and seize their property. They also conduct “No-Refusal, Forced-Blood-Draw” checkpoints for nearly every holiday of the year. The Tennessee Highway Patrol is arguably the most unconstitutional of all the police agencies in the state and that’s something I know from personal experience.

For those of you who are still on the fence about checkpoints, I hope you will check this out this video I made about the topic: