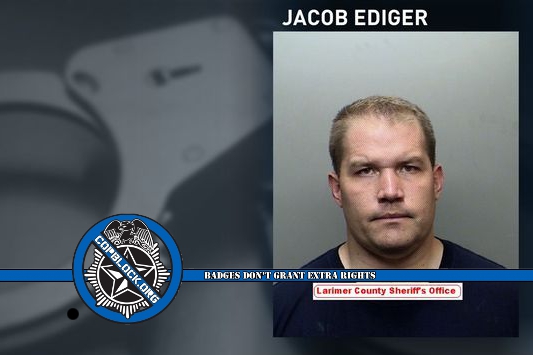 Deputy Ediger is accused of hitting his wife of 13 years with a door and then knocking her and their 9-month-old baby off a porch. He was formally charged Thursday with misdemeanor counts of third-degree assault causing injury and child abuse.

According to the police report, Deputy Ediger was arguing with his wife inside of their house. In an attempt to move away from him and deescalate the potentially dangerous situation, the wife, who was cradling their 9-month-old baby, stepped outside of the house onto the front porch.

Instead of just letting things settle down, Deputy Ediger tried to continue the argument outside, but his wife blocked the screen door, which prevented him from opening it. Those actions enraged the Deputy to the point he shoved the door open, sending his wife and baby flying backwards off the porch, where they landed in a flower and rock garden.

Deputy Ediger admitted to police that the two had been arguing, but claims it was all an accident. In his twisted version of events, he was merely trying to go outside to console the crying infant, when he opened the door, which accidentally hit his wife and baby.

The Sheriff’s Office has put Deputy Ediger on paid vacation, err, I mean “Administrative Leave” while the investigation is being conducted. His bond was set at $1,250. He is next due in court Aug. 20.

In a press release, Sheriff Justin Smith said he is disappointed, but insists that sheriff’s office employees “will be held to the highest of standards and will be held accountable for any alleged violations of the law.”

A few days ago, I wrote an article that talked about police officers and their involvement with domestic abuse/violence and child abuse. According to several sources, police officers are up to 4 times more likely to beat their spouse and children. Click the image below for that article and more information.