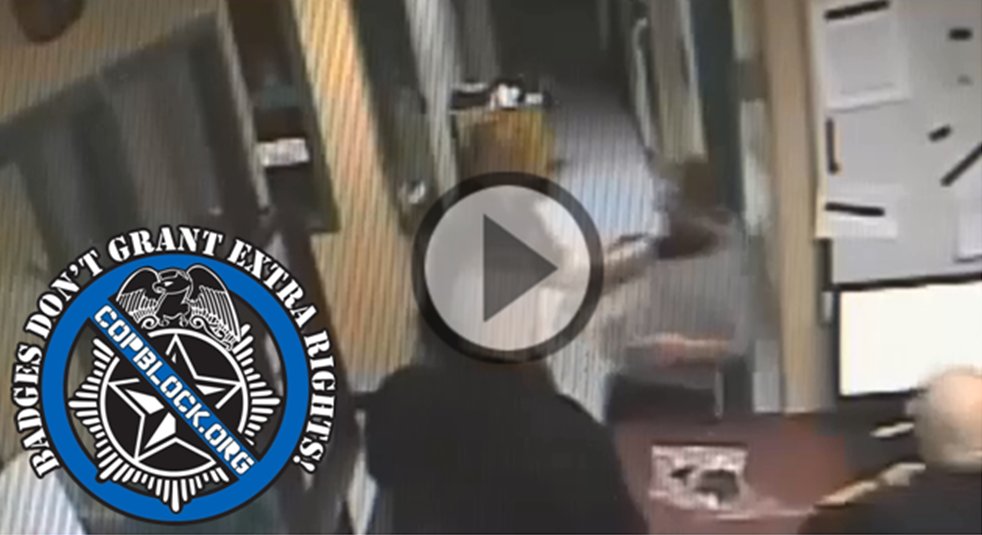 Surveillance video has emerged from inside a Kentucky jail showing deputy jailers with the Madison County Detention Center attack and assault a man that did nothing more than turn his head.

The footage shows 26-year-old John William Hanson – who was arrested and charged with disorderly conduct in February 2013 following a bar fight – being booked into the jail before jailer Brian Staggs grabs him by the throat and forces him back into a wall.

Hanson was emptying his pockets when Staggs tells him to “drop the fucking attitude.”

The footage shows Hanson turn to the jailer in a nonthreatening manner and say, “I ain’t dropping no fucking attitude” before the assault begins and three more jailers join in.

In a federal lawsuit seeking damages for pain, suffering and medical expenses Hanson says the assault resulted in “four to five days in the hospital due to the traumatic injuries” – including a labrum tear in his right shoulder.

“One or more of the jailers placed Hanson in a head-lock while Whitaker choked him for an extended period, despite Hanson not fighting back or resisting” – the suit asserts – and also claims that Hanson’s face changed color due to being deprived of oxygen.

The suit says the man was then forced into a restraint chair and placed in a holding cell where he lost consciousness before he was awakened with smelling salts and sprayed with mace, despite not being combative.

Hanson was then pulled into another room where he was pinned against a wall, tased repeatedly in his mid-section and denied medical attention, the suit claims.

Madison County jail officials have refused to comment on a “pending lawsuit,” but jailers claimed in reports filed after the incident that they “restrained Hanson after he took a combative stance.” The surveillance video appears to show no such thing.