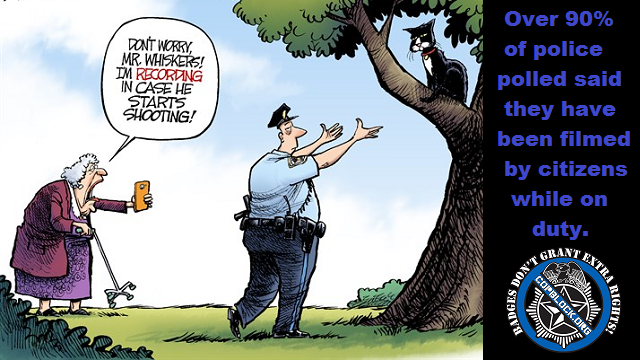 I was recently shown a poll from PoliceOne.com that made me pretty delighted. When (so far) almost 1,900 officers were asked the following question:

“Have you been videotaped by bystanders and/or citizen contacts while on duty?”

…over 90% of officers responded that they have been recorded on duty.

That is a huge victory for every organization and individual out there working towards police accountability. In just a few years we have created an entire culture of filming the police. This, in turn, has led to more widespread public knowledge about the corruption, misconduct and brutality that has plagued our public protection services since their inception. For the first time in history we have the ideas, information and tools which empower us to create a change in the forces of aggression that act as our keepers.

So keep filming police and sharing the stories, because it is working!

Now lets take a look at some of the other polls on that website and see what we can learn about the mentality and culture of the individuals serving the police state.

If you had it to do all over again, would you still choose law enforcement as your career?

Nearly half of all police regret their careers. That is a staggering number for any lifelong profession, especially one with such high job security, pay and benefits. The reasons individual officers responded ‘no’ probably vary widely. Some probably dislike the system that has grown around them. Some probably don’t like the people they are required to ‘serve and protect’. Others likely just do not like the requirements of the position as special assignments.

Wany at CopBlock.org have advocated that the ‘good cops’ in our police system are not best utilized in that institution. For maximum effectiveness, consistency and satisfaction it is likely that many current officers would be better off sharing their talents and passion elsewhere. For more resources on alternatives for law enforcement officers be sure to check out our Welcome LEO’s section.

Which ‘special assignment’ most appeals to you?

The top three responses all often directly relate to activities involving the War on Drugs. Why do cops enjoy these sort of special assignments more than others? Is it because the activities seem to have the most direct effects in their departments receiving funding that potentially funnels into their wages and benefits? Or is it is because government and media have constructed a fairy tale Bogey Man of mind-altering substance that makes battling against their distribution and use more meaningful to the individual officer? So what then happens when drug prohibition and other vice and victimless crime laws are eventually appealed due to pressure from an increasingly skeptical populace? Will the 60% of officers who do not regret their careers suddenly find their jobs unfulfilling? What do you think it says that so much of the activity and satisfaction of police rests solely on the enforcement of the kinds of laws that prevent peaceful people from making voluntary exchanges and altering their own consciousness?

Swat Team made the top of the list and I believe the reason for that is because roughly that amount of people who sign up to become officers are adventure seekers who use the career to operate above the normal limits of society. If you still carry with you that childhood dream of dressing up in badass costumes and blowing stuff up and kicking ass, then Swat Teams are the perfect place for you. Unfortunately, a system which is meant to serve and protect the citizenry with compassion, humanity and reason is not a place where you want to see such types congregating. It is simply not a good partnering, without saying anything negative of those who carry such drives. Policing is not playing army in the woods with fireworks you snuck out of your parents garage, and those looking to chase the dragon of adventure they developed in a lifetime of such activities have no business trying to replicate that rush by becoming ‘peace’ officers.

The appeal of the K9 Unit seems pretty obvious. Dogs are mans best friend. The chance to work alongside a partner without all of the annoyances, weaknesses and frailties of human beings is an alluring idea. The problem is that cops are themselves responsible for killing more of these animals than any other agency or statistical/demographic group. Add to this the number of canine pets being killed by cops and one wonders if police have really earned the right to place those noble creatures into their servitude.

Which of the following concerns you more?

I am not entirely sure how these surveys are conducted. Was there no third option for ‘not concerned’? If there was that option, did not one single officer express that they are not concerned about citizens expressing themselves via the constitutional guaranteed rights that every LEO has worn an oath to uphold and protect? Is it just a given that being a cop means that you can not empathize with those who are critical of your profession or institution?

It is telling that police officers recognize the strength of the internet as a voice for those critical of them. Yet it is also perhaps a harbinger that police, and especially police unions, will push for first amendment restrictions that attempt to tie the hands of their critics. There have already been some minor attempts, though I suspect this nightmarish outcome will evolve to a greater nexus of possibility before free speech issues come to a head between the citizens and the government and its agencies. Those who have come to rely on aggression to get their way have become more addicted to that method than any crackhead who has ever lit up and suffered their thousandth burnt lip. A crackhead will eventually overdose, but when an entire system becomes addicted to compulsion, coercion and aggression it will take more than a twelve step program or faith in a higher power for that to end.

Do you think banning toy guns would cut down on criminal use of replica firearms?

Thankfully police, while often individually not being the cookies in the jar with most chocolate chips, are still not quite as stupid as politicians and/or their rhetoric. Yet they follow their laws and orders unquestionably. Yeah, see a problem there? If toy guns are banned do you believe that 82% of LEO’s will expressly refuse to enforce those laws?

Would public perception of “police militarization” change if agencies painted their armored vehicles in the same scheme as their patrol vehicles (as opposed to black or desert tan)?

What is meant by “but only in some places”? I simply cannot wrap my head around the vagueness of that response. My best guess would be that city cops think are country folks are dumb, while rural officers believe city slickers ain’t none too bright. The other guess is just that it was such a dumb question with such bad choices, that many chose to respond this way merely out of the limitations the options provided. The ‘whatever’ answer.

Of course there are 20% of respondents that think merely changing the color of military equipment in their possession will magically convince people that it is okay for the ‘peace officers’ who ‘serve and protect’ us to be armed with weaponry that is meaningless in the sort of protection services most people desire from police.

“Well, I really just wanted them to stop people from robbing, raping and killing, not to become a private government militia fighting against citizens and their rights, but if you paint that armored vehicle pink and put a unicorn and some rainbows on it, I could be convinced otherwise.”

Does that 20% really think that we are that dumb or is that an indication of just how dumb the bottom 1/5th of LEO’s are?

The final answer- “No, the public has made up its mind.” is worded in such a way as to insinuate that we are all a bunch of immovable idiots that could never really understand the superiority and righteous of cop logic and reasoning.

The response might have been- “No, nor should they concede such a violation of their society.” Now that would have been a good response. And I am willing to admit that some officers may have answered in the former while intending the latter. Yet even if half of them believe that response fully and literally, that means that over 1/4 of them think that we should have a militarized police in this country and that some people are too dumb to get it even if they painted the equipment like a bag of skittles or decorated it like Pee Wee Herman’s bicycle.

Overall I have gotten that there is a lot of disdain, condescension, patronizing and negative ideology for and about citizens by the individual officers who responded to these polls. There exists an attitude of superiority, supremacy and self-righteousness on behalf of cops which forms a barrier between citizens and law enforcement. Their mentality and culture appear to be completely out of touch with the consensual reality subscribed to by those who employ them for service and protection. This imbalance itself shows the destructive nature of assigning and conferring extras rights, powers and privileges on police. In any system in which so much power and resources are invested, there can never be the kind of harmony that promotes peace between citizens and police, let alone citizens among themselves. The former is a problem we can fix by dismantling that system and recreating new paradigms to replace the services we still desire in its absence, while the latter is the age old struggle of humanity which can never be fixed by a system or institution that relies on the same aggression it is supposed to protect us from.

There was an old lady who swallowed a fly…

There are many more of these polls at that website with a lot more enlightening information about how cops think and interact with one another. If you liked this article share it in all your social media outlets and if the response is great enough I will continue it as a series in the future.

Thank you for all of your support in the past, present and future. Like an electric current, words like these can only travel when there are proper connections and conductivity. You are those conductive connections. Keep spreading the current and I will keep creating it!