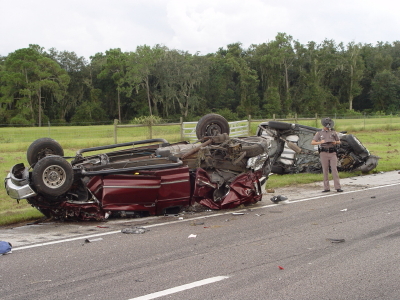 An article surfaced today on The Columbus Dispatch website, in which the headline reads, “2015 proving deadly on Ohio Roads.” I see this headline and think of all the checkpoints, click-it-or-ticket campaigns, all the extra cops on the road, the endless stream of traffic citations, the posts on the Ohio State Police Facebook page, and all the police posts on their homepages. All of them praising the “stepped up” efforts of law enforcement to prevent fatalities on the roads. The Dispatch reports:

On Monday, the State Highway Patrol released statistics for this year and found a sharp uptick in fatalities when compared with the same time the past two years.

As of Sunday, there were 665 fatalities in Ohio. And even though 61 of those crashes still must be confirmed as official fatalities (ruling out, for example, a person who dies for a medical reason), the number is up considerably over this time last year.

By mid-August 2014, there were 571 confirmed fatalities due to traffic crashes, according to the patrol.

The question is, why?

All this time, it’s the cars that are the dangerous things. Despite all the efforts by Ohio law enforcement over the past year, traffic deaths are still on the rise! So in other words, all those checkpoints, all those seat belt tickets, all the laws and enforcement that accompany it, and the roads are no safer than they were last year! Why?

The National Safety Council estimated in a report this spring that a quarter of all crashes involve cellphone use. Besides fatal crashes, that also includes injury-only and property-damage-only crashes.

Maybe it’s because the cars and the idiots who drive them (I use the term “drive” loosely!) are the problems. Let’s ban the cars! Let’s ban everyone from doing the many things they do beside driving when they are behind the wheel! Obviously the general public cannot be trusted with such a responsibility. Especially when you consider all the efforts of law enforcement and all the money they spent on it over the last year! We spent all that money on enforcement of victimless crime laws and the death toll is higher than ever! Or maybe, just maybe, we can save ourselves millions of dollars by repealing all these traffic laws. Especially those that are nothing more than rights violations to the millions of drivers on the roads every day. Maybe we stop the extortion of people to pay for it all, too. Maybe we start making sure that when you kill someone with a car and you were texting at the time, you go to jail for life! Stop fining people for not using the turn signal, speeding, and having the license plate light out, and turn up personal responsibility a notch!

If you are driving and you are eating, texting, reading, or putting on your makeup and you kill someone, maybe you should be the one held responsible. We shouldn’t punish the entire driving population for the actions of careless drivers and create so many laws with no victims that you need more cops to catch them. Let’s not forget, I have not even mentioned the double standard that exists for LEO’s regarding these victimless crime traffic laws! But that’s a discussion for another time.