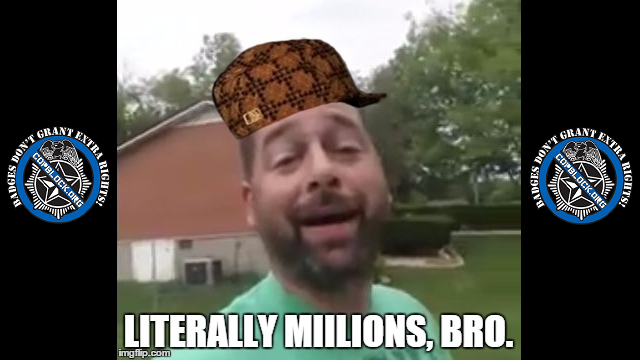 It has been awhile since I have spoken with my buddy John Burk, who was the feature of my first edition of Copsucker’s Corner. In the time since we have last spoken, I have wondered if I would ever again meet a copsucker who filled me with so much. I thought I may walk upon this lonely planet for the rest of my life without ever meeting another special someone. Someone whose basic bootlicking idiocy and low intelligence would be my pillar and give me strength when I didn’t believe in myself. But thanks to Amiri King, whose profound mental issues and delusory state has him convinced that he is a comedian, I am already feeling a lot better about being me, simply by virtue of not being him.

Watch this stupid-ass video where store-brand Larry the Cable Guy goes on a rant about how delighted he is to have a load of cop in his mouth.

Below is a transcription of the rant, which I will respond to [in blue] at the end of each paragraph.

I was at an appearance the other day for the Wounded Warrior Project and I got my picture took with a couple of police officers. I was a little surprised that there was a few people on my…on the comments section that were like, “Fuck the police. Police ain’t shit. All police officers can suck my dick.” (chuckles)

Uh oh, right off the bat, after the WWP reference, you realize you are listening to one of those mindless -MUH HEROES!- idiots who thinks that violent aggression on the behalf of the state is something to worship without question. All expectations of logic and human compassion go right out the window. And his little self-superior asshole chuckle is as grotesque as John Stewart, Rush Limbaugh or any of these other jackass pundits who think that their symbolic gesturing towards intelligence actually proves it.

What the fuck…really? Why so anti-police? There’s so many better things that you could be against. Lets see, you could be anti-pedophile. Anti-guy that breaks into houses and shit. Anti-pillhead-breaking-into-your-car-and-stealing-all-your-change. Anti-Luke Bryan. (chuckles)

Well, it is pretty simple, people are anti-police because of the criminal shit that they do. They are anti-police because of the corruption, violence and brutality inherent in our system of law enforcement. And guess what, you can be anti-police and anti-all-those-other-things. The logic suggests that you can only be anti-one-thing, but if that were the case then you couldn’t be anti-breaks-into-houses-and-shit and anti-breaks-into-your-car at the same time, because you can only be against one thing at a time. This is clearly an illogical, dipshit stance.

But you want to be anti-police. And people keep postin’ these videos of people gettin’ body slammed and people getting hemmed up. “Oh my god, police brutality. Oh my god, why is this happening?” Bitch, that’s not police brutality, that’s resisting arrest. I’m pretty sure because you pushed the officer and told him no, like, a hundred fuckin’ times.

I am not sure exactly which video he is referring to, but he seems to think that every  case of police brutality is exactly the same, and that all of those brutalized were involved in a crime. However it is easily demonstrable that a huge portion of those beaten or killed by police were committing no crimes. Yet even if they had, that does not give police the right to commit criminal acts of violence against them. We have laws and standards for a reason, but apparently ol’ Macaroni Salad here does not believe in the laws and standards we have unless the person committing them forgot to check out a badge before committing them.

That’s not funny. If you committed acts which violated another human beings person or property, that’s just fucking awful. Standing up for your fellow criminals, because they have uniforms, does not make up for your immoral and illegal behavior. I am glad he was never shot, tased, maced or tackled and thrown to the ground. But just because he got lucky doesn’t invalidate all the cases where force was used unnecessarily. Besides that, I don’t think he understands what ‘literally’ means. When followed by a hyperbolistic statement, it literally loses its meaning.

That he would actually do the hokey pokey and let other human beings rob him of his dignity, free will and self-ownership is pretty sad. It is even more sad that he expects everyone else to be a spineless coward with no limits on what they will do just because someone with an official title tells them to. In fact, nothing is sadder than the coward who parades their cowardice as virtue and feels entitled to expect other to do the same so they don’t look like such a weakling for their shameful ideas and actions.

Its not that I’m an ass-kisser. Its just that I have a plethora of common sense. For all the crimes that I admitted, I didn’t blame the police. I didn’t blame the judge. It was my fault. I held myself accountable. And nowadays somebody will get busted breaking into a garage and get caught with a gram in their pocket- they fuckin’ get hemmed up and they get arrested. Then all their friends are on Facebook like “Free my boy Dip-Dizzy-Wizzle! Free Dizzy-Dizzy-Wizzle. Free…”- what the fuck?

Yes, you are an ass-kisser, Amiri. I would also accept ‘copsucker’, ‘bootlicker’ or ‘traitor to your species’. Also, plethora means a large or excessive amount of things (plural), while common sense is singular, you muck-minded dickwit. It doesn’t take a lot of common sense to realize there is no ‘s’ at the end of ‘sense’. If you held yourself accountable, did you turn yourself in for your crimes and plead guilty? I kinda doubt that. The accountability shtick is an afterthought. By the end of that statement, paired with his blatant redneck tool personality, you start to get the picture that dude here has some serious bigotries and prejudice. Dizzy-Wizzle? I get the feeling he is doing to black folks what people do to Asians when they call them ‘Ching-Chang-Chong’ or some shit.

Are you fuckin’ serious, free them? They’re not Nelson Mandela, motherfucker. They’re not a political prisoner seeking asylum in a foreign state. Free them? They stole my rims and a goddamn chainsaw. (chuckles)

Since possessing or using drugs is a crime in which there is no victim, except potentially ones self, drug offenses are a political crime. So if his sticking point is the drugs and not the theft, then he obviously didn’t think this one through before spouting it out his copjunk receptacle.

Ya’all are what’s wrong with America. Believe me, its not the police officers.

You know who says, “Ya’all are whats wrong with America.”? The people who are whats wrong with the world, that is who. Yet considering that America was founded on ideas of freedom, liberty, self-ownership, limited government and the right not to be harassed by ‘officials’, it seems pretty clear who the problem is here.

I got outta prison in 2001. Decided to keep my nose clean, change my life. Never got in trouble again. Never had a problem with a cop. Never even had two words with one. Believe me, when you decide to quit breaking the law, they’ll leave you the fuck alone. (chuckles)

Good for you, Amiri. If you hadn’t gotten out of prison or the criminal lifestyle then the world would now have one less unfunny hillbilly jackass who thinks they are a comedian. And yet again, much of the problem is all the non-criminals who are abducted, imprisoned, fined, shamed or attacked by police on a regular basis. But I think Amiri is okay with the individuals and system that do that. But why? Well the answer is right up there. Amiri did some time. There are a few phenomena that occur to people in those horrendous situations. Institutionalization, firstly, which is where a person becomes desensitized to the rigidity of the system they are trapped in and come to depend on it. Secondly we have Stockholm Syndrome, where the captives come to empathize and side with their captors as a defense mechanism for the horror of the situation they are in. Methinks ol’ Macaroni Salad here suffers from both.

Fuck the police? What a basic bitch statement to make. (chuckles)

I think it’s pretty clear that that bigotry and prejudice I mentioned earlier manifests itself in many forms in this guy. Racism, sexism, homophobia- they all show up in his rant, even though often thinly veiled as (really fucking bad) jokes. I don’t think it is his love for the laws of this country that inspired this douchebottles ignoramus rant. I think it was his hatred and stereotyping that caused him to take the side of those he commends for causing pain and suffering to the people he associates with crime, which in his mind are people who are not just like him. Even though he is a convicted criminal. It is not so much that he loves police as it is that he loves it when they negatively impact those that he hates.

Amiri King, you are a fucking intellectual mongoloid and an immoral sack of fermented yak shit. You are not funny, intelligent or any of the things that you think you are when you put on that goofy self-righteous grin and mouthshit out that menacingly annoying self-satisfied giggle of yours. You may have wowed a bunch of stupid bumpkins and cops with your dazzlingly absurd and half-witted spiel, but nobody with any decency or intelligence gives a pinhead of shit about your sophmoric jokes or bargain bin opinions, you vaccuous low-grade imitation Jeff Foxworthy imbecile.