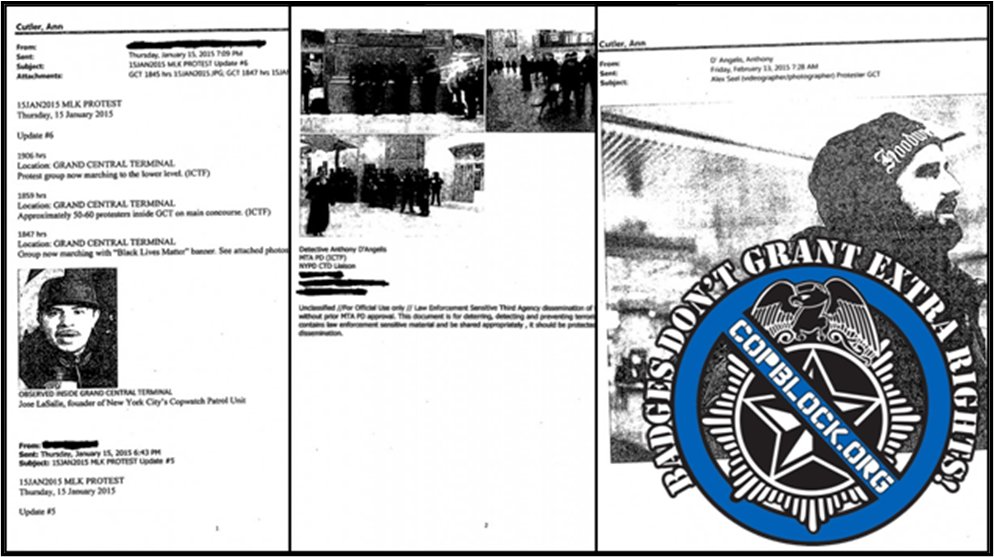 COINTELPRO was a series of covert, and at times illegal, projects conducted by the FBI aimed at surveying, infiltrating, discrediting, and disrupting domestic political organizations between 1956 and 1971.

Its hard to imagine these operations ever stopped or didn’t continue under a different name, but recent government documents released by the New York Metropolitan Transit Authority and the Metro-North Railroad, reveal similar counter-surveillance measures of Black Lives Matter activists by police, the Intercept reports.

The Intercept points out:

The protest surveillance and use of undercover officers raises questions over whether New York-area law enforcement agencies are potentially criminalizing the exercise of free speech and treating activists like terrorist threats. Critics say the police files seem to document a response vastly disproportionate to the level of law breaking associated with the protests.

The documents were released to activists after several requests under New York’s Freedom of Information Law, which asked for records from the MTA, MTA Metro-North, the New York State Police, and the NYPD pertaining to Black Lives Matter protests at Grand Central Terminal between November 2014 and January 2015.

Together the 118 MTA and 161 Metro-North documents also showed monitoring of an additional protest in November 2014, 11 protests in December 2014, nine protests in January 2015, and two protests in February 2015 by MTA officials and undercover police working at times in conjunction with NYPD officers.

The documents outline surveillance operations conducted against many police accountability and community organizations during numerous events and protests and include detailed information about individual protesters activities, background information and even photos.

Though the redacted documents omit the undercover officers names making it unclear whether any are documented NYPD personnel, the ACLU says that if the NYPD is collecting photographs of protesters – like the MTA appears to be doing – it may be in encroachment upon the Handschu agreement.

“The NYPD is not permitted to retain information gathered from public events unless it’s connected to suspected criminal or terrorist activity,” ACLU attorney Nusrat Choudhury said of the agreement, which regulates how the department’s can monitor political groups.

“They cannot identify someone and have their photo in their files unless they have evidence supporting reasonable suspicion that he was about to commit criminal activity or had engaged in criminal conduct.”

Though the documents were obtained from the MTA and Metro-North, they include several references to collaboration with NYPD officers. In one email from January 1, 2015, for example, an undercover police officer shares attached field reports and photographs of a protest at Grand Central, which MTA counterterrorism agents provided “in conjunction with NYPD Intel team members.”

In another document, sent February 13 concerning a demonstration at Grand Central, Anthony D’Angelis, identified in the document as an MTA liaison with the NYPD’s counterterrorism division, shared and labeled a photo of Alex Seel, a local photographer. In the documents, D’Angelis uses an NYPD email address.

Jose LaSalle, founder of New York police watchdog group Copwatch Patrol Unit – whose name and picture are included in documents noting that he was surveiled during Martin Luther King Jr. Day protests – says the revelations are just “another example of how anyone who is practicing their constitutional rights and speaking against the government is going to be considered a domestic problem.”

“It’s sad because all we’re doing is speaking because we feel there is no justice for people being brutalized by the system. It’s sad we have to be targets of surveillance when were not committing crimes,” LaSalle added.