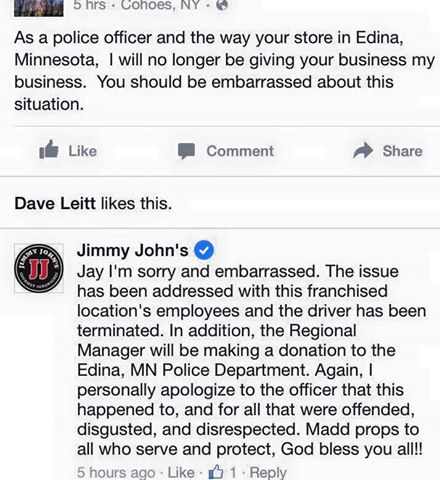 A Minneapolis cop identified only as “Ray” posted to the Jimmy John’s Facebook page that he would be taking his business elsewhere and that they should be embarrassed. The Jimmy John’s admin, in true cop-sucker fashion, apologized and reiterated the fact that the employee [who refused to serve a cop] had been terminated. The admin also mentioned that the regional manager was going to make a donation of an unknown amount to the Edina Police Department. He ended by giving those who protect and serve “madd props.”

If Jimmy John’s was at all informed on the law enforcement climate in Minneapolis, I doubt they would be as inclined to shell out donations and apologies to anyone who was offended.

If anyone should be ashamed of their behavior it is the individuals who make up the law enforcement of the Minneapolis police departments. In May, Officer Michael Griffin was arrested on 9 different criminal counts. The charges include civil rights violations and perjury.  Griffin has cost the city $410,000 in two brutality cases. His attorney maintains his innocence.

Since 2010 Minneapolis has paid over 10 million dollars in 90 lawsuits resulting from 141 misconduct charges. In 2011 and 2014 they paid over a $4 million in lawsuits pertaining to police misconduct. One can only imagine how many complaints weren’t filed that should have been.

It appears that Jimmy John’s has it all wrong when it comes to “protecting and serving.” In fact it appears they are just going out of their way to blindly support an organization that has made a habit of extorting its delivery drivers. Why would Jimmy John’s be so inclined to bow down to a department that in less than five years managed to rack up 141 misconduct charges leading to large payouts? The answer?  The Edina Minneapolis Jimmy John’s franchise is operated by cop-sucking state lovers.