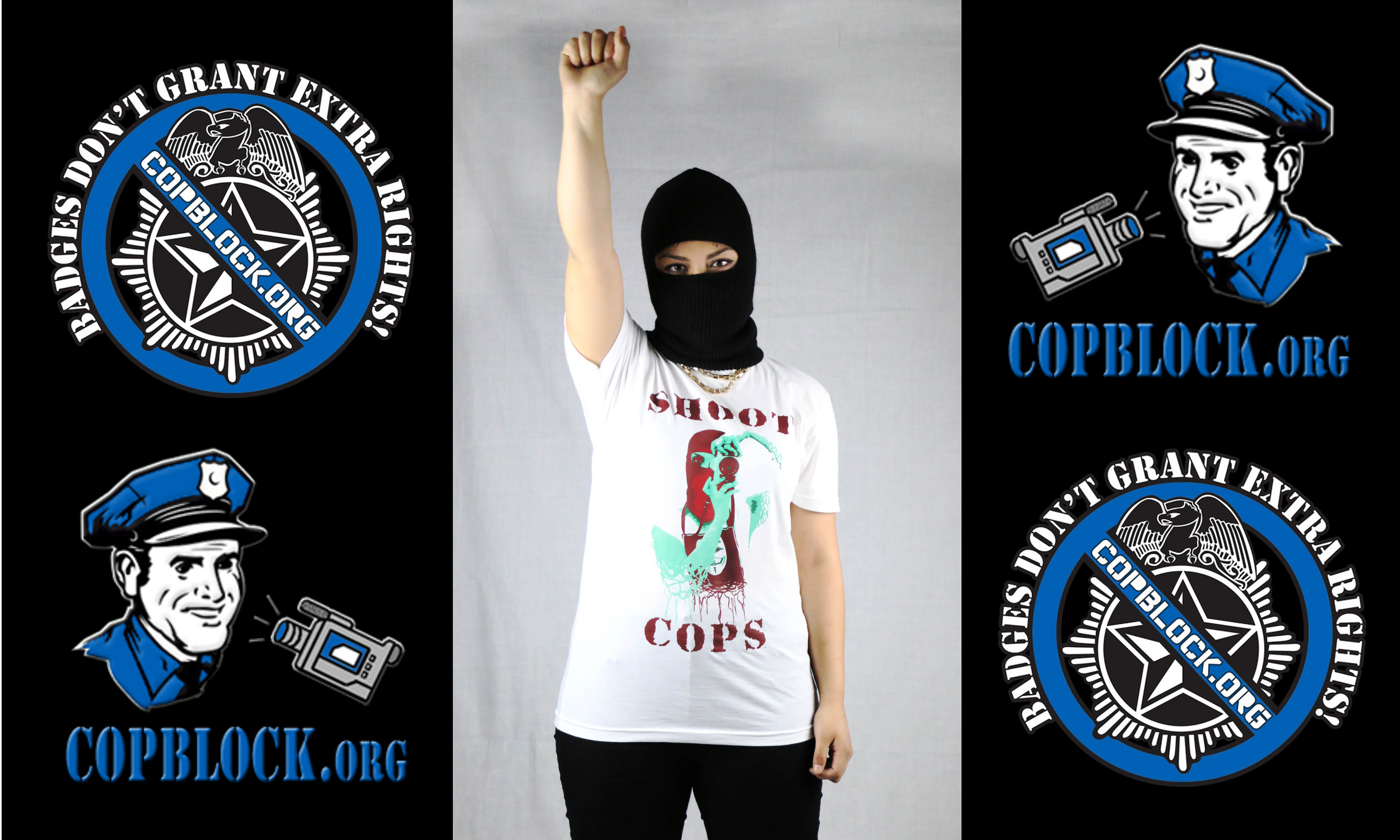 Although, I have actually met Francisco Carbajal, the CEO of Ndigenous Visionaries (a company owned and run by people of color) and the person behind the “Shoot Cops” T-shirts, the news report within this post was submitted anonymously by a reader, via the Cop Block Submission page.

There are a lot of things to say about the message and the (minor) controversy that the specific wording caused recently within Las Vegas, but first here is the statement directly from the Ndigenous Visionaries website about the true meaning behind the shirt (links added):

With so much police violence going on locally and globally we decided to drop this tee. We don’t mean pick up a gun an pull the trigger, we mean any interaction you have with a police officer pull out your phone and record. Filming police officers is not illegal. Together we can prevent casualties. Let’s go out there and SHOOT COPS!

One of the criticisms of these shirts is the obvious (and intentional) shock value that the statement “shoot cops” creates. That’s something that invites that sort of criticism, but it also attracts attention. Beyond that, if someone is able to deal with the initial hostility it will create amongst some people, it provides an opportunity to have a conversation about the state of policing specifically within Las Vegas and also nationally, as well.

One of the things worth discussing about the video included in this post is the commentary by retired Metro Police Lt. Randy Sutton, who is perplexed by the “recent” trend of people not having respect for police. The first thing that needs to be pointed out is that Sutton is a shill for the LVMPD, who is generally brought in by local news stations in Las Vegas to analyze video or comment on stories and frame it in a pro-police perspective. He actually stated a couple weeks ago that not only was the Phony War On Cops real, but that the “streets of America are flowing with the blood of the police.” Secondly, here’s a news flash for Former Lt. Randy Sutton, people are losing respect for the police because of all the murders they are committing and the complete and absolute lack of accountability for those murders. It’s not because of a T-shirt or something someone wrote on a sidewalk.  Closing your eyes to that and holding fake support rallies for yourself that nobody outside of cops and their families attends won’t change that. Accountability will.

The truth is that the number of cases involving brutality and outright murder within Las Vegas, along with the historical lack of accountability is itself shocking. the idea that not one single cop in the 100+ year history of the city of Las Vegas has ever been in the wrong when they shot someone is ludicrous. Yet that is the record of “accountability” that the LVMPD and other Las Vegas area police departments have. The message that Metro and their leadership are sending with that should be no less controversial than these T-shirts.

Obviously, we here at CopBlock support and encourage filming of the police to ensure accountability and, in the unfortunate instance when cops violate someone’s rights and/or resort to unnecessary violence, to make sure their is proof of their misconduct. It also serves as an important deterrent to such situations. I personally very much encourage everyone to get one of these shirts (along with a Nevada Cop Block shirt or traditional Cop Block shirt) and to always “shoot cops.” (with a camera)