According to Lt. Brad Hetlet, the injured man, 26-year-old Ainsley Ball, did not file a complaint, and the excessive-force incident was not mentioned by officer Bisciglia.  In fact, it was discovered when Officer Bisciglia’s supervisor did a routine check of dashcam video to make sure the audio and video components were working properly.

On the video surveillance taken from inside the store, you can see a man trying to get Officer Bisciglia’s attention by tapping him on the shoulder. The out-of-control officer responds by knocking his hand away, and then shoving the man back. Once outside, Officer Bisciglia then shoves Ainsley Ball, knocking him to the ground.

Officer Bisciglia decided to leave any incriminating evidence out of his official report. When questioned about the incidents, he stated that,

I told Ainsley he was under arrest he again pushed himself back towards me. At this time, I feared that Ainsley would become physically combative towards me. I assume a defensive stance and pushed Ainsley away from me to put distance between myself and he(sic). At that time, Ainsley stumbled as he was trying to push towards me. Ainsley fell to the ground.

Referring to his officer’s actions, Lt. Hetlet had this to say, “Credibility is everything when you’re a police officer. You have to be a credible witness for the state for prosecution purposes and we expect certain things of our officers.” 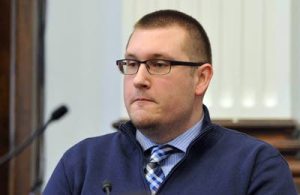 Despite Lt. Hetlet’s concerns, the Kenosha Police Department has had problems of late concerning their credibility. Former Officer Kyle Baars is accused of planting evidence in a case involving the shooting death of Anthony Edwards that occurred on April 14th, 2014.  A criminal complaint issued against him indicates Baars served as a Kenosha police officer from September 1st, 2011 through January 18th, 2015. He resigned from the Kenosha Police Department in January. 28-year-old Kyle Baars faces one count of obstructing an officer and one count of misconduct in public office.

Another of Kenosha’s finest, Officer Pablo Torres, shot and killed a man after returning to work, after a ten day suspension, for shooting another man in a difference incident. It was discovered during the investigation that Officer Torres had nine excessive-force complaints while serving with the department. He also received at least seven verbal or written reprimands.

The Kenosha Police Department made national headlines after a billboard was erected, thanking people for their support of Officer Pablo Torres. The Kenosha Police Department released at statement saying, “The recent incidents in the community have greatly impacted many people including the officer, his family and the entire police department. We have been humbled by the outpouring of support the community has given us and we wanted to simply say thank you for that support.”

And, if all of the aforementioned stories of the Kenosha Police Department is not enough, then here is one more. On Memorial Day of this year, witnesses videoed Kenosha Police Officers beating two black teens. The police chief defended his officers actions by saying, “The video doesn’t tell the whole story.”

207
SHARES
FacebookTwitterGoogleRedditTumblr
DiggLinkedinStumbleuponMailPrint
You Can Support Cop Block by shoppping on Amazon using the banner below:
BANNERS ARE CLICKABLE