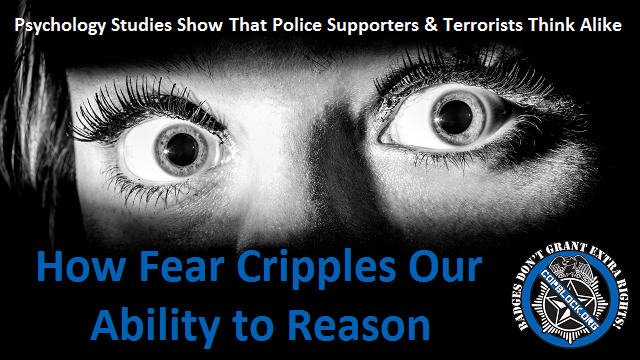 A recent article from the Australian media outlet SBS showing how Scientism is psychologically identical to religion or other forms of ideological extremism and dogma has some interesting implications regarding the supporters of police and the state. Before I make that connection, take a look at what the article had to say about the psychological roots of extremism.

Last year, the University of Maryland’s Arie Kruglanski detailed evidence that psychology, not theology, is at the root of extremist ideologies.

Extremist groups like ISIL offer adherents a sense of personal worth, he argued, but they also provide believers with certainties about the world that they so desperately need.

Whether studying extremists in Morocco, Northern Ireland, Palestine, the Philippines, Spain, or Sri Lanka, Kruglanski found that believers all displayed a desire for certainty and structure that was higher than average. For extremists, Kruglanski wrote in the online journal E-International Relations, the world is one of “good versus evil, saints versus sinners, order versus chaos; a pure universe in black and white admitting no shades of gray.”

As his research shows, we all have different baseline levels of need for closure, but our distaste for ambiguity can also be heightened by uncertainty and stress.

Extremism results, in part, when our natural need for order is enflamed by disorder.

The content of extremist beliefs, beyond their status-reassuring certainties, is incidental. Moral relativism, which holds that objective criteria do not exist for judging norms, seems to spring from this link between extremism and the craving for certainty.

As NYU student Zachary Fine observed in The New York Times​ last year: “The byproducts of absolute truths and intractable forms of ideology … historically seem linked to bigotry and prejudice.”

Indeed, Kruglanski’s concept of the need for closure and the very study of the intolerance of ambiguity stem from post-World War II attempts to understand Nazism.

The psychology of extremism reveals an important point: part of what makes a belief system dangerous is its dogmatic denial of uncertainty.

Every supporter of the state and their guardians, the police, cite the necessity of their existence with a list of all the scary things that could happen if those agencies did not exist. Nevermind that those scary things still do happen and are done more often by the state and its servants than by any individual in history, or all of them not serving the state, combined. It is always primal fear of the chaos and uncertainty that exists naturally in our reality which becomes the sticking point for why people continue to believe that police, governments or other bureaucracies MUST exist. That this can be demonstrated to be irrational through examining the horrors of authoritarianism makes no difference to them. The reason that logic and reason do not matter to those who put faith in powers above their own is that it is all predicated on emotional response and has nothing at all to do with any legitimate intellectual factors. Police, the state, theism and all other institutions of authority over the individual are merely ‘safety blankets’ for the emotionally fragile. And through the masses of people who are unable to reason through their fears and emotional and existential hang-ups, there comes support for institutions which provide the perfect home for the very worst among us. Their beliefs have created a protector costume and filled it with predators.

The world is an uncertain place with the possibility of danger always present. That is the very nature of our reality. Reality cannot be policed against. You cannot construct laws to undermine the laws of probability. No system or institution can eradicate chaos from this existence. It exists naturally as part of the experience of living. Without that uncertainty and breadth of possibility our lives would mean nothing. Money that cannot be spent is worthless just as lives that cannot be lost have no purpose. Surviving the difficult obstacles that reality throws before us is what makes it worth living. Perfection is an unchanging hell.

Chaos exists. It is a natural extension of our being. To allow ourselves to fear it to the extent that we attempt to deny the inevitable through comforting delusions of order only creates disorder. Order is entropic. It breaks down over time. Things that break down must undergo radical processes to do so. These radical processes are what we experience as an increase of disorder in our world. Therefore it is not chaos which threatens us as much as what we do out of fear of it. That fear can set off a chain reaction of social and belief structures that do even more to create the things we feared in the first place.

If the world seems increasingly disordered to you, it is not because more order is needed. It is because having tried that solution unsuccessfully for so long has created the perceived increase in disorder. If terrorists and criminals seem worse than ever it is because, like wasps, when you swat their nest they become irate and swarm after you. There are no more wasps than there were before, you just created conditions in which the wasps effect on your being is increased exponentially.

Police and the state they serve are an apparatus that exists by swatting nests and then offering to protect you from the wasps – for a price. Whether that price be the hard-earned money of your labors, the erosion of your rights and liberties or the increased threat of angry wasps, you will have to pay. The world pays.

If you were to look at the world like a game and yourself like a player, then you would come to see that chaos creates the challenges that make the game exciting. But playing with authority is like playing with cheaters. Maybe the cheaters harm you, maybe not. But if the only way you got to the end of the game was by cheating, it probably wasn’t even worth playing.