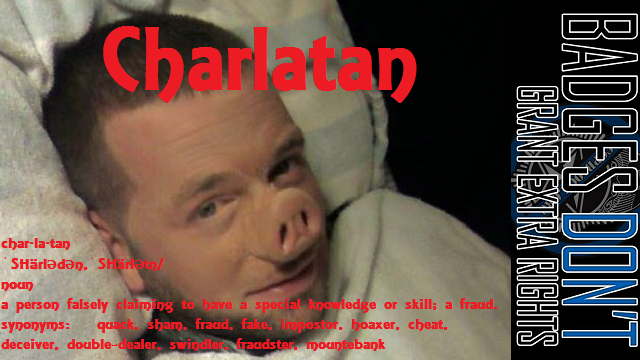 After my recent article about Amiri King, ‘Copsuckers Corner #2: A Plethora of Common Sense’, I received a lot of feedback. Much of it was of the – “You’re a fag” or “You’re a pussy” – variety. There were also all of the typical copsucker statements about how I would call the police in a minute if I was in trouble, as well as the expressed desire to see me brutalized by police. The intellectual and moral content of these emotionally wounded keyboard warriors was pretty much what I expected it would be. People who do not think for themselves rarely have anything surprising to say. I could write their scripts for them while doing complex geometry and taking a painful shit.

However there were a few others who contacted me, some of who were acquainted with Amiri and a few others who had been watching his trainwreck unfold over the past several months, who wanted to point out to me that Amiri King really doesn’t give a shit about cops. There were some other pretty damning accusations, but nothing I can substantiate or care to go into. Amiri doesn’t seem to care about anyone but himself, including his fans. Words like “opportunist”, “charlatan” and “hustler” came up in these conversations many times.

With that in mind I went back to this statement:

I was at an appearance the other day for the Wounded Warrior Project and I got my picture took with a couple of police officers. I was a little surprised that there was a few people on my…on the comments section that were like, “Fuck the police. Police ain’t shit. All police officers can suck my dick.” So I went looking for this picture, which seems to have been removed from his Facebook page. I guess he wasn’t that proud of his boys in blue, or he has something to hide. What I was told, however, is that Amiri did not begin his pro-police campaign until after the police-critical comments from his fans came to light, and there was an even bigger response of hatred to them by the rest of his mindless hillbilly copsucker followers.

So what happened? Amiri spotted a position that was popular amongst his fans and decided to run with it. Not because he believes in the police, but because he saw an opportunity to exploit the popular beliefs of his fans in order to bolster the Amiri ‘Macaroni Salad’ King brand name and make some more fans and money out of the deal.

It was revealed to me in confidentiality by two different sources that Amiri himself has used the phrase ‘Fuck the police’ himself numerous times in the past. He has even publicly made jokes in the past that were critical of police and the justice system. But as soon as he saw what his most base fans wanted, he gave it to them, because that is how this attention whore makes money. Not through hard, honest work, but by exploiting the misguided beliefs of his followers. If enough of his fans showed up in his comments section extolling the virtues of pedophilia, King would jump right on board. There is no Hokey Pokey so stupid or immoral that he will not dance it if he thinks it will gain him fans or cash.

Like a politician, Amiri will say whatever it takes to get what he wants. Also, like a politician, he thinks his followers are a bunch of stupid sheep who he can lead around however he sees fit. As a few of his followers pointed out, Amiri has a shit ton more followers on his Facebook page than I do on mine. That is to be expected, however, considering that I never pander to popular opinion in order to exploit people for my own gain, while that is pretty much all Amiri does. I also think of the people who read my articles as people who desire and deserve truth and respect. King only cares about how much fame and money he can obtain from his fans. Truth or respect have nothing to do with his goals.

While it doesn’t bother me to receive the amounts of hate mail I have gotten in the wake of that original post, it does bother me that the very people who are saying all of these hateful things are just unwitting dupes of Kings little fan club army, who he manipulates for his own benefit, without caring how much hate and stupidity it creates. While I try to make the world a better and smarter place and don’t make a lot of money or acolytes doing so, Amiri has amassed an army of people who he intentionally dumbs down and fills with vitriol as he manipulates them for profit. King has convinced his followers that, despite the obvious evidence to the contrary, he is a comedian. But the only punchline he ever manages to use is making his own followers look like desperate fools. And somehow, they are all too willing to be used in his little scheme.

In the end, that makes him much like the very police that he exploits for his own purposes. While police are busy holding meaningless public relations campaigns to sell you their product, they are also abusing their power, extorting your money, and making a giant joke out of their supporters with their actions. So while the charlatan extraordinaire, King, may not really give a fuck about the police, he sure has learned a lot about how to swindle people by studying and copying them. And also like police, in the end, the people who are made to look like the biggest asses are his unquestioning, mindless followers.