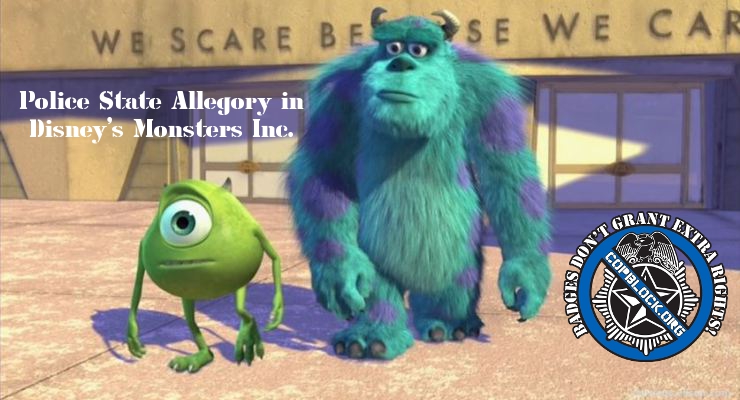 For our Police State there’s even a nice Orwellian motto, “We Scare Because We Care”.

My four year old son picked the Walt Disney / Pixar movie Monsters Inc. from our DVD’s to watch last night. I haven’t seen the movie in a very long time and it was clear to me in the first few minutes that when I did watch it, I had missed what seems to me now to be a very obvious allegory for our Police State reality.

I wont recap the entire movie, but here are the highlights where I saw a clear correlation between ideas in the movie and our Police State as well as what helps to drive it. Mainly fear.

Mike and Sulley are the two main character monsters who work for Monsters Inc. Their life revolves around their career and they are good worker drones. They are a top scare team for the power company run by a crooked creepy old guy. Early on we’re hit with the use of scarcity as a means to alter the behavior of the population when Sulley forces Mike to walk to work citing a scream shortage as the reason. The screams, fear expressed by children when scared by a monster, are collected by teams of monsters who work an assembly line of closet doors which open to little children’s rooms.

Power for the monster civilization comes from the fear of little children. The population of monsters are held in constant fear from multiple sources. They fear losing their power because screams are harder to come by and “children these days just don’t scare as easy”. They fear the children they scare for power because the children carry disease and “a single touch could kill you!”. They also fear the CDA, a paramilitary like authoritarian organization responsible for among other things: quarantine and decontamination from contact with children, and infected artifacts that may find their way from ‘our’ world in to theirs. One poor monster is repeatedly attacked by this Child Detection Agency over quarantine related hysteria, reported to authorities by his own friend and co-worker! “2319, we have a 2319!”

Mike and Sulley unwittingly stumble in to a nefarious plot. The head of the corporation (secretly under investigation by the paramilitary authority) wants to secure his corporations monopoly on power using a new technology to harvest the screams of kidnapped children. “I’ll kidnap a thousand children before I let this company die!” Henry J. Waternoose III says at one point. This puts Mike and Sulley in direct contact with a child, a would be kidnapping and experimentation victim, who slips through an open closet portal in to the monster civilization. It’s a huge no-no to harbor dangerous disease ridden children. So Mike and Sulley become targets of the CDA for concealing and protecting the obviously harmless little girl who Sulley affectionately names Boo.

What would any good Police State be without a little false flag terror hyped up by the media to prey upon the fears of the population? I think we find this theme in the story too where the child is blamed for the destruction of a local eatery one evening. In reality the destruction is caused by panic over the unwarranted fear of the child, and the excessive force of the paramilitary authority who detain anyone in reach and destroy anything that may have been in contact with the child. Mike’s girlfriend Celia appears unhurt when apprehended by the CDA that night, but when you see her the next day she is beaten and bruised. Would it surprise you that within the highest levels of both the paramilitary authority and the corporation it’s known that children are not a real threat to monsters?

It’s funny sad, and ha-ha, watching the big and scary monsters fear the tiny girl. It is the type of response, to a police state built on manufactured terror, politicized social issues, and xenophobia, exhibited by those who remain plugged in to, polarized and programmed by, the corporate state media propaganda machine. Monster citizens are shown on the local news embellishing their encounters with the child, one citizen describing how it flew around and blasted things with its laser.

A couple of important things happen to Mike and Sulley as they work to return Boo home. First is the obligatory victory for the heroes over their direct social and career competition, a conniving slimy snakelike corporate and social climber named Randall. Second is the welcome find of an alternative energy source ten times more powerful and more plentiful than screams and doesn’t involve kidnapping and child abuse.

Unfortunately it’s a wash in the end. Victory for the good guys amounts to nothing more than a step-up in social status and their career. Ideally we’d see this alternative energy source become a free-market parallel system to the existing model which would replace the old corrupt system. But it happens that the paramilitary authority seizes control of the corporation, solving the problem of a self-serving capitalist pig maintaining a monopoly by setting up their own to retain control of the newly discovered and more powerful laugh energy. Now complete with a paramilitary authority behind it that already maintains a Police State.

Am I wrong? Is this not a cartoon mirror held up to our reality? It has it all: Fear driven policy. Political and corporate intrigue. Child exploitation and people manipulation. Authoritarian policing and systematic harassment. A touch of ratting out your neighbors. False Flags and Hegelian Dialectics. Media distortions. Even esoteric Symbology. A little something for everyone.