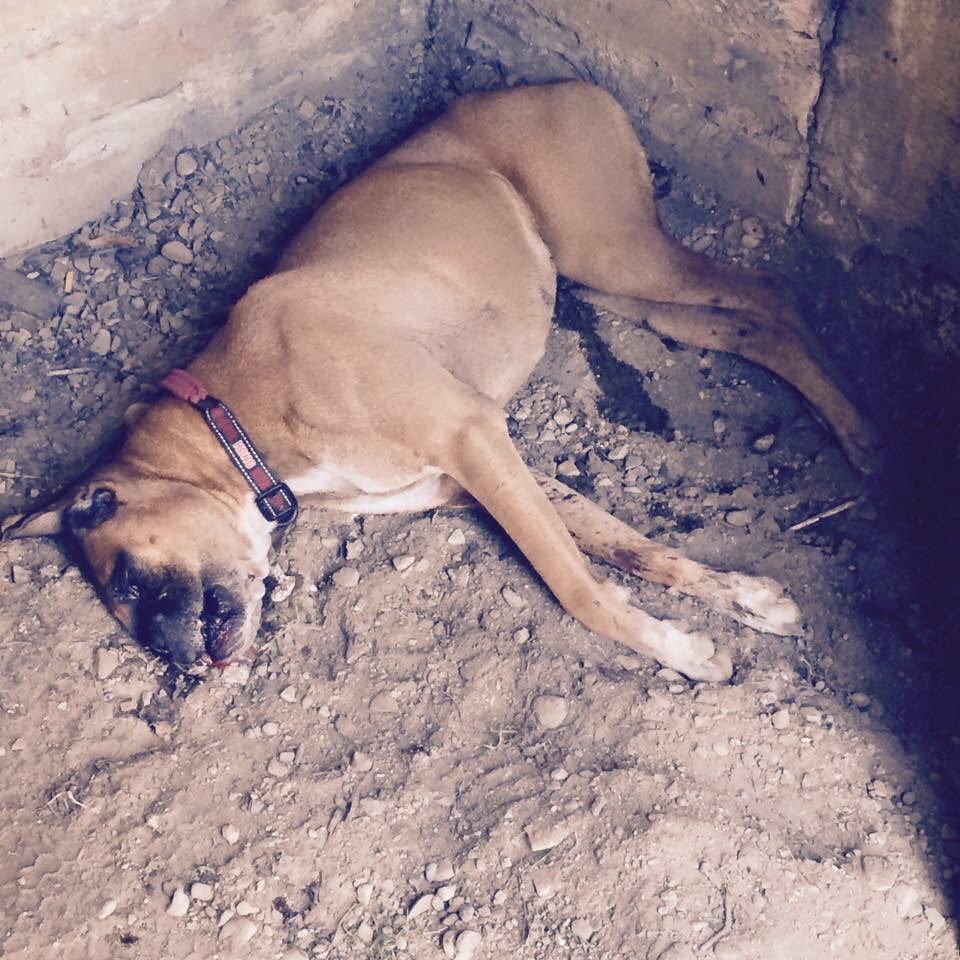 Rocky has been part of our family for ten years. He was a full-blooded boxer who has never shown any signs of aggression or approached anyone with anything less than a wagging stub (his tail). I was working literally ten feet away from where he was laying and heard a man in a calm/friendly tone of voice say, “Lay down, boy.” Three seconds later, I heard the gun go off!

Rocky never barked at the deputy, or made any noise for that matter. I ran out to the street. I saw Rocky running, bleeding profusely, and heard him yelping loudly. I asked deputy Robert Holcomb why he shot my dog. He said, “I thought he was going to attack me.” I then asked why he thought that when Rocky didn’t even bark or growl at him. The deputy responded, “Well, I wasn’t going to give him a chance to!”

Justice needs to be served! He had no right shooting our dog just because “he wasn’t on a leash.”
Isn’t that what the “Dog Catcher” is for?

The following related excerpt comes from an article published in July 2014 entitled, Why Are Police Shooting So Many Family Dogs?

No government agency keeps a national database on the number of pets killed by police. But animal-abuse activists have kept statistics, and they say a pet is killed by law enforcement every 98 minutes in America. They say it is largely a result of officers having little-to-no training on how to deal with dogs.

And if they will shoot a person’s pet without hesitating, that should make people concerned for their own safety, Rosenthal said.

“It’s a travesty that’s going on all over the country, and the more it happens the more our police feel emboldened to pull their guns and shoot first,” Rosenthal said.

“Is that supposed to make us feel safe? Government and police have gotten to the point where they cease to serve the citizens and believe everyone is here for their convenience. Between the civil-asset forfeiture laws, which have now become big business for police departments, and the civil rights violations in just so many different areas, it’s become really a problem. We are developing an American Gestapo.”

Rosenthal said when police conduct searches, they don’t make plans for the presence of a dog, they simply assume all dogs are dangerous and shoot them.

“Whenever and wherever this happens, people are horrified at the reckless use of police power, but basically (police) ignore it in the name of security,” Rosenthal said.

2.9k
SHARES
FacebookTwitterGoogleRedditTumblr
DiggLinkedinStumbleuponMailPrint
You Can Support Cop Block by shoppping on Amazon using the banner below:
BANNERS ARE CLICKABLE