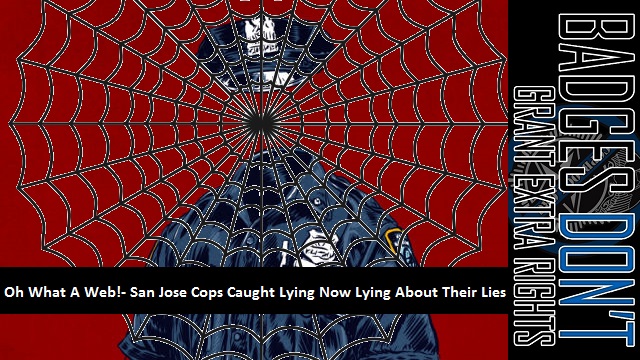 We all have lied. It is a part of being human. You cannot judge someone for lying alone. But how somebody deals with their lies once they have been exposed does say a lot more about them than simply lying in the first place.

Such is the case for police in San Jose, California, who have been caught in their lies regarding the killing of Richard Jacquez. Jacquez was shot to death while running away from police. Sgt. Enrique Garcia went on record hours later saying the the suspect had reached for his waistband, causing officers to MUH LIVES!

The story soon changed, however, as police revealed that Jacquez was unarmed, had not reached for his waistband, and didn’t even make officers afraid of having to face their maker for their immoral lifestyles.

Now San Jose Police are claiming that their contradictory statements were not so much the product of their outright lies, so much as it was all just a simple miscommunication. Just a simple error.

READ MORE ABOUT THIS INCIDENT HERE

Guess what, motherfuckers? You don’t get to do that. You don’t get to use the public record to cover up your crimes and then say it was just a little mistake when your lies are revealed. This is why people are turning against the police. It has nothing to do with CopBlock or any other accountability group. It has nothing to do with anti-police rhetoric. Those are not the causes, those are the results.

The cause of the growing anti-police sentiment in this country stems from the fact that you have no quandaries about killing people, lying about it, then lying about your own lies when they are revealed. You need not invent bogey men to explain why people do not trust police. People need to do nothing more than watch your words and actions to figure out for themselves how untrustworthy and dangerous you are.

Are you a ‘good cop’? Cool, bro. Now saddle up and go deal with every one of these lying, killing shitbags. If you don’t have the balls to do that, then get out of my face with this good cop bullshit. If you allow your fellow officers to break not only the law, but the moral codes you hold dear, you are not a good cop. You are just a slightly less bad cop who is either inconsistent or an outright hypocrite. You can’t just do a good deed or two and escape the totality of the system you work for. That system is fully corrupt and broken. There can be no good spokes on a bent wheel.

Until I see an uprising of these good cops, a vigilante movement that holds everyone of their lying, killing, stealing, freedom and liberty detracting partners in blue responsible, I will not even pretend there are good cops. So you saved a guy’s life. So you hugged somebody. So you bought a meth-head some Huggies for their baby. That does not mean shit. Those are nice things to do, but they have nothing to do with the main reason you (supposedly) exist, which is to serve and protect against those who would prey on the weak. Your institution is strong. Individuals, compared unto it, are weak. And the institution of policing preys on the individual every day in every city, town and country through unjust laws and their enforcement. And that is just the baseline of your moral bankruptcy. It tops out somewhere around kills, lies about it, then lies about the lies.

So prove me wrong, ‘good cops’. I fucking dare you. Lets see you lined up outside the San Jose PD ready to fuck some shit up unless the killing, lying liars are brought to justice. Not gonna happen? Right. Then lets shut up about these ‘good cops’, because they don’t exist.