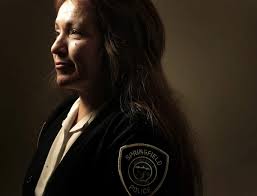 Thelma Barone was hired in 2003 to be the Springfield Crime Prevention Practitioner, in an effort to build trust between police, and the Latino community. Her community service work was derailed last February, after a meeting with the City Club of Springfield. One attendee asked if she had heard anything about racial profiling. She responded that in 2013 she had taken numerous phone calls alleging racial profiling. Her positive answer to the question was misconstrued by the police as “Exaggerating the problem, and Encouraging complaints”.

Interestingly enough Oregon is one of 25 states that do not have racial profiling bans. Im not exactly sure what that says about the “land of the free”, but half of the country, still thinks racial profiling is cool.

Neil Laudati the Spokesperson for Springfield would not comment on the discipline, but stated it was not related to her remarks at City Club.

“In fact, during that presentation Chief Tim Doney introduced her to the group at Ms. Barone’s request and even assisted her with answering questions, including one regarding racial profiling. Our legal counsel has instructed us not to provide further details at this time.

In a poorly masked attempt to fire someone who had confirmed racist policing principles, one week after City Club Ms. Barone was called to sergeants office, where she was placed on administrative leave for “dishonest conduct”  He then ordered that she be escorted from the building by an officer.

The dishonest conduct that Ms. Barone participated in, was nothing more than allowing a high school tour to take pictures without asking for permission first. Initially they told her she was going to be fired, but the police union got involved in the case, and after months of litigation; in July she was allowed to return to work after a one month suspension without pay.

The lawsuit alleges when she returned to work, she was made to wear body armor, and assigned to patrol. She was demoted to community service officer, and stripped of her multicultural work. She was required to sign a “Last chance agreement” or be fired. The agreement stipulated that she could to say anything negative about the department, its employees or her colleagues. She refused.

Obviously they are just as inclined to infringe on the 1st Amendment rights of their employees, as they are the high school kids touring the facilities.

Ms. Barone sent a letter to the police department conveying her disagreement with her demotion.

The department wants to take away from a large segment of our community their vital connection to public safety services,”

As well as touching on the fact that she can’t effectively do her job by remaining silent about complaints.

“… Building bridges of trust between police and community – the job I was hired to do – cannot be done by staying silent about complaints.

I guess I shouldn’t be too surprised that an institution whose foundation is secrecy and silence would expect every other employee to act with the same disregard to officer misconduct as they do, but those who don’t, just like any other whistleblower are swiftly removed from the workplace.

Ms. Barone was fired on the Aug 12th 2015, and her case is before Chief US District Judge Ann Aiken. The lawsuit does not specify a dollar amount.

Consider the fact that this involves more than just cops, but also officials of local government you can see a pattern of collusion, in fact multiple other officers have already won, or have pending high dollar lawsuits ranging from race, or ethnicity to trying to expose corruption in the department.

Ms. Thelma Barone claimed race and national origin, as well as whistleblowing activities in her lawsuit.

Sgt. John Umenhofer just settled a 250,000 lawsuit alleging that his efforts to expose corruption, were stymied, and eventually cost him his job.

Ethan Spencer won over 200,000 in workers compensation and severance pay after an on duty leg injury. His claim also mentioned being targeted for mistaken belief that he may have a mental disability.

Melanie Nichol filed a federal lawsuit with the city stating she was retaliated against and fired for complaints about misconduct in the department pre Chief Tim Doney. Im not trying to vouch for any of these cops, and they may just be lucky assholes who made off with a bunch of tax dollars, after all someone did try to hire a hitman to kill Officer Spencer after he was acquitted for killing his son. Include the unpunished officer involved shootings of Ethan Spencer, and you have got a department that naturally only breeds corruption.

Hopefully Ms. Barone’s lawsuit will do more than cost the tax payers hundreds of thousands of dollars, It has the potential to overturn not just a corrupt police force, but also the local government that protects it.