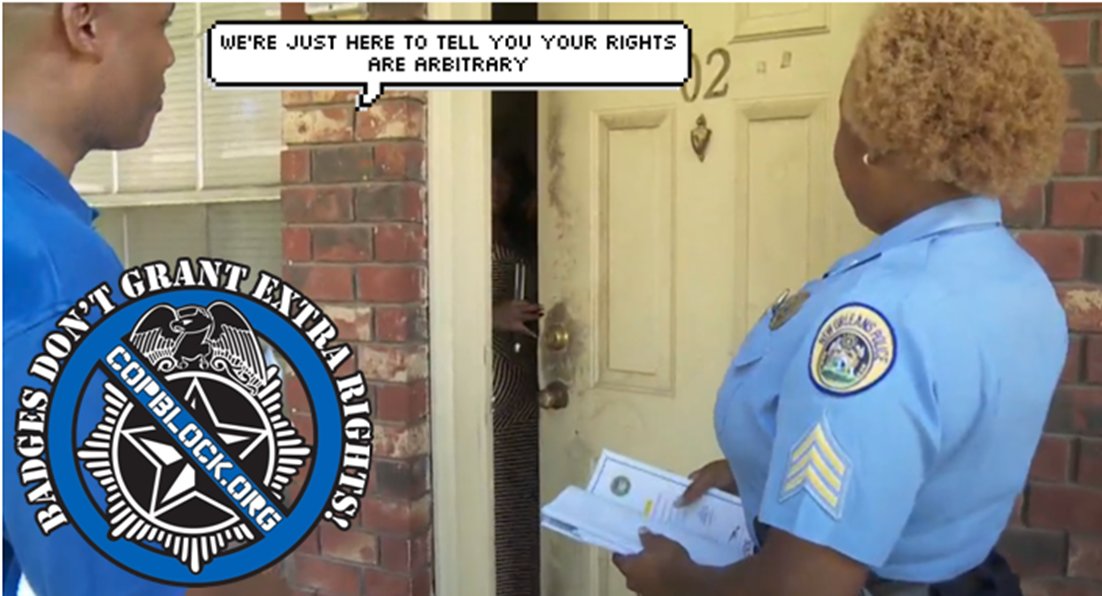 Thank God criminals follow laws – otherwise we might be in trouble. This has always been the traditional attitude of government in regards to gun restrictions.

It is important to note that everybody believes in gun rights. – It is just a question of who has those rights. So-called “gun-control supporters” don’t support the absence of guns in society, they support gun ownership being monopolized and centralized in the hands of the state and their enforcers(police).

By criminalizing individuals 2nd Amendment right to defend themselves, governemnt exempts itself from its own rules and faces no repercussions.

This is certainly the case in victim disarmament areas like school zones where only magical costumes and shinny badges grant one the legal right to carry a firearm – consequently making schools a prime target for mass shootings.

Government revels in the idea of asserting itself over the population – so it is no surprise that a joint initiative launched in New Orleans is doing just that as the ATF, New Orleans Police Department and the Orleans Parish Sheriff’s Office go door-to-door across the metro area informing gun owners that they have no rights in school zones.

“Federal law makes it an offense to possess a firearm within a 1,000 feet of a school,” U.S. Attorney Kenneth Polite, who joined in the ridiculous display of hubris, said. “So we wanted to get the word out to the community about this work.”

The resource sucking initiative is being sold as “just a friendly reminder” by local media outlets but startled homeowners answered their doors over the weekend to costumed storm-troopers and plain clothes agents informing them that federal gun laws penalize self-defense in school zones with minimum fines of $5,000 and up to five years in prison.

“This is the second time we have focused on a school here in New Orleans East,” Polite said of the 7th District. “[The area has certainly] suffered from a lot of crime over a long period of time.”

Brilliant! What better way is there to ensure the safety of schools than by going to homes and telling everybody no one can legally defend themselves there?

Whereas a genuine market-based security service would reward individuals with lower insurance premiums who took the necessary steps to ensure their own safety, government thugs are happy to revoke your rights and tell you its for the safety of your children.

While states are always and everywhere eager to disarm their populations and thus rob them of an essential means of self-defense, private-law societies are characterized by an unrestricted right to self-defense and hence by widespread private gun and weapon ownership. Just imagine a security producer who demanded of its prospective clients that they would first have to completely disarm themselves before it would be willing to defend the clients’ life and property. Correctly, everyone would think of this as a bad joke and refuse such on offer.

Freely financed insurance companies that demanded potential clients first hand over all of their means of self-defense as a prerequisite of protection would immediately arouse the utmost suspicion as to their true motives, and they would quickly go bankrupt. In their own best interest, insurance companies would reward armed clients, in particular those able to certify some level of training in the handling of arms, charging them lower premiums reflecting the lower risk that they represent. Just as insurers charge less if homeowners have an alarm system or a safe installed, so would a trained gun owner represent a lower insurance risk.

ATF spokesperson Constance Hester said the initiative is “a good time to meet the community on a lighter note.” – And what lighter note is there than informing the tax-slaves that they will be extorted and imprisoned for attempting to protect their loved ones?

“One of the things that is very important for the community is to know we want to not only be reactive, but proactive,” Hester propagandized. “We also want to build a better relationship with the community.”

Despicable! This is beneath the dignity of a free people…