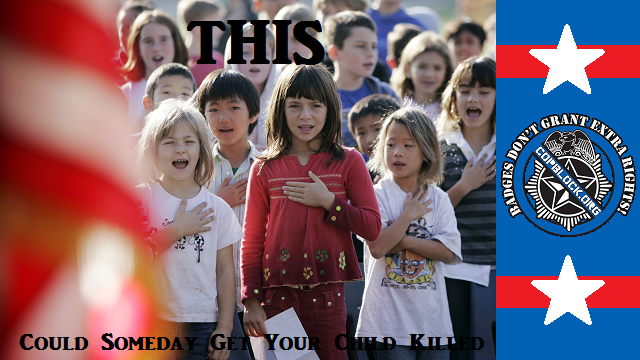 Lousiana State Trooper Steven Vincent recently lost his life in a senseless act of immoral aggression and violence on the side of a state-funded road. Vincent was attempting to assist a man who had been in a car accident when that man returned the favor by mercilessly shooting the trooper with a sawed off shotgun and killing him.

Murder, which is the act of one human intentionally killing another human out of malice, is widely regarded by every moral, legal, religious system in every culture and society as the No-No #1. The killing of Vincent is no less tragic than any other senseless act of aggressive violence.

Every time an officer is killed by some murderous maniac, we get a variety of feedback asking us why we do not cover these incidences. Although it should be obvious that we are in a very specific line of work, in the same way that nobody expects a double bacon cheeseburger at Taco Bell, we still [SURPRISE!] have lots of people who just don’t seem to get it. This time I will indulge them.

First I would like to send my condolences to the family and friends of Steven Vincent. May you find comfort, hope and meaning in this time of loss and may this tragedy eventually be transformed into the strength and guidance needed in honoring Steven throughout the rest of your lives and in all that you do.

While we cannot say where in life things went wrong for the coward killer Kevin Daigle, we can investigate how the man whom he brutally murdered came to be in the position that he was in. Steven Vincent, like almost every other individual in our society, grew up in a culture that commended and held an almost religious reverence for those who commit violence on behalf of the state. His whole life, from his earliest moments on, were spent surrounded by the message and ideology that those who take up arms to serve the government, its policies and agenda, are heroes. Further, through media and compulsive state-ran schools, he was immersed in a worldview that said that anybody who does not believe that this is true is a traitor or coward or some other form of degenerate. Every moment of his life forced him through an ideological mold that eventually put him in a Louisiana roadside ditch in an uniform and badge, where he was killed in cold blood.

Had Vincent instead grown up in an environment which held that all forms of aggression and violence were not to be tolerated or esteemed, he might likely still be alive. Violent aggression is an ideology in and of itself. Whether one supports aggressive violence by individuals or by the state, it matters not. The ideology becomes a self-replicating cycle, a feedback loop, which only ever amounts to the escalation of horror embedded in that ideology. So long as we hold dear the use of violent aggression as a means of controlling human beings, it will continue. Criminals and law enforcement both contribute to the same tragic results, which occur not because one side or the other is winning or losing, but because we have allowed the lines between the two to be marked through bloodshed.

Whether a child is abused and mistreated and set up for a violent future, or if they are in a loving and safe environment filled with messages extolling the virtues of heroism-as-violent aggressor, both sides are sent spiraling down a path that puts theirs and others lives in danger. You can teach a child the difference between right and wrong, but when you also teach them that it is okay to do the wrong things because they are on the ‘right’ side, then you contribute towards the cycle of violence that creates the conditions which get people senselessly killed.

Our entire nationalistic ideology has drifted from individualism and self-ownership towards the far left ideologies of absolute control by the state and its agents. It is without an irony whatsoever that I am continuously called a liberal or democrat or leftist by people who have abandoned our national ideology in favor of the socialistic forces of militarized state police and interventionalist standing armies. Government policing agencies and militaries are almost the very definition of socialism at work. My grandfather summed up true conservatism (less government, more voluntary consent and interaction) in the following phrase, “To each their own, leave mine alone.” It is a powerful statement of truth about self-responsibility, freedom and liberty. One cannot support the institutionalized violence of military and police and yet call themselves champions of individual choice and freedom. Supporting such systems is as far left as you can go.

So then how do we end this cycle of violence that robs us not only our freedoms and liberties, but the lives of those we love? We simply stop encouraging participation in the systems that precipitate that violence and trespass against individuals. You don’t have to hate individual police officers or soldiers. You do not have to teach your children to hate them either. Rather, you can use logic and reason to point out why such systemic institutions of aggression are ideologically and morally inconsistent with the goal of living in a peaceful and prosperous world. You can believe and teach that real heroes are those who work outside of systems to bring peace and justice to their fellow humans. Acts of heroism have no meaning when those committing them were just doing their jobs. Following orders is not just an easy way to get killed, but also an easy way to get others killed or to become the killer yourself. Real heroes do not give or take orders, they avoid them altogether and act out of the goodness and strength of their own character and bravery. So rather than teaching your kids to think that it is a noble profession to kill or be killed serving a government who serves only itself and its corporate owners, teach them it is noble to stand up against the real criminals by refusing to participate in their system. Non-compliance with systems of violent aggression that profit the most privileged is heroism. It takes more bravery and courage to stand up against these institutions than to join them.

The hero-worship that has become part of our cultural identity, because it is tied to service to the state, has become the greatest force of death and destruction in the world. It creates conditions though which those systems can survive only through the escalation of aggression. There is no winning. Just an endless game of greed and envy played out by the most powerful with us as their pawns. Their victory is our loss. Praising service to them is not contributing to a safer and more prosperous world, it is doing the exact opposite.

Meanwhile people like Steven Vincent, who were raised to believe that such service was heroic, contribute to a system that escalates violence and all too often leads to their own tragic deaths. Had Stevens family and friends encouraged him to disregard the lies of governments, their schools and media, he might still be alive today. Rather than paying tribute to him as a fallen hero we should give our sympathy to his memory by not letting our own loved ones end up dead in a ditch while serving the greatest enemies of freedom. Rather than inspiring more children to someday be killed by their own misguided ideologies, we should inspire them to use their own minds and talents to make the world a better place through creativity and innovation. Reliance on the archaic, brutal and savage system of state-sponsored violence will only make their future dimmer, and worse, may get them killed.

Those who live by the sword, die by the sword. Save lives, stop encouraging swordplay. Teaching your kids not to kill for the state will give them a brighter future and may save their lives.

{Disclaimer- This is not an argument for pacifism or absolute non-violence. Defending yourself is your instinctual birthright and makes sense morally and logically. However, the violence of aggressors does not.}