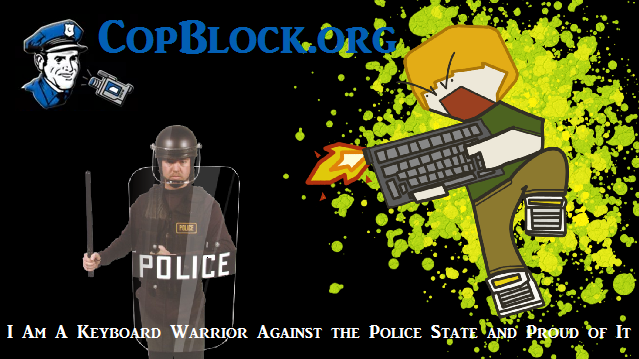 Nary an earthly rotation occurs whence the titular designation ‘keyboard warrior’ is not thrust upon yours truly by some poor, confused meathead living in a bygone era. Woven within this accusatory label is the highly illogical inference that the systems of communication technologies are not a valid method of creating and affecting positive change in the real world outside our monitors. Thusly, it is expected by these cave people that I should be ashamed of my inclinations to seek a better world through communications technologies. Nothing, in fact, could be further from the truth. Not only is my method increasingly effective and a source of pride in my own efforts, but those who think being a Keyboard Warrior is invalid are going to have a very difficult time adjusting to a future that arrives with exponentially increasing rapidity.

For comparison sake, let me show you a few sentences that illustrate the futility of such thinking.

Do you see yet how ridiculous this line of thinking is? As a logical premise, the idea that new technologies are incapable of becoming more powerful than old ones, is patently absurd and fool-headed.

Besides this, the warriors of all types, all throughout history, have been forged in beliefs and ideas. The world they fought in, for or against was one created by ideas and beliefs, whether their own or those of their environment. The contents of the human mind always precede the actions of the physical body. If one wishes to maximum the effectiveness of physical reality they must begin with strong ideologies and beliefs that make it all possible.

The keyboard is connected to the computer which is connected to a world-wide-web of information being accessed by more human beings every single day. It should therefore stand to reason that the keyboard, since it becomes the conduit by which the ideologies of humans are forged, stands as the most potent and powerful weapon in human history to date. Information and the ability to disseminate it are the most powerful tool in history and a modern technology which does so more efficiently than ever before has created a weapon more powerful than any before.

Bullets can tear through the hearts of men. Bombs can level their cities. But information can rebuild them. The weapons of destruction are weak, as they work only in one direction. Yet ideas can create and destroy, which makes them the most potentially powerful implement at the disposal of human beings. The keyboard is the device by which that potential can be released to do its work in the ‘real world’.

When my detractors speak as though my use of information technologies is some impotent activity, they are either very stupid or very afraid. Those who would have you depend on them use information to insert in us the false belief that only physical force and aggressive violence are the only effective means of accomplishing ones goals. That misinformation is far more powerful than that violence, because without it the violence itself would be buried beneath better ideas. The people implanting these ideas wish to have a monopoly on power and control over all human activities. So far they have used violence where their ideas have failed, which shows how weak their ideas are. New beliefs and ideologies are being birthed alongside this new age of information that will out-compete such foolish haphazard thinking. New ideas will not only replace the old ideas about the supremacy of aggression and violence, they will also replace the acts themselves.

The world ahead is one in which information will be more powerful than any weapon or army ever to exist. It is already being exploited by people like myself who wish to topple other obsolete paradigms, not by changing the physical world through destructive force, but by replacing those archaic ideas with fresh new ones.

Likewise, the police state will not be ended by breeding bigger wolves who watch the wolves who watch the sheep. It will be ended when the sheep learn to work together and use their resources not just to protect themselves from one another, but to chase off the wolves, who were always the greater danger to them. Police will not stop killing people because the people or the police kill police who kill people. They will stop doing so because their services will have been rendered obsolete by people who replaced them through creativity and innovation. The police state will fall from the double-edged sword of their own false ideologies combined with the superior new ones that will replace them. And those ideas will likely be typed out on a keyboard and shared with others who will help to improve and implement them. The keyboard will be the crux by which both criminals of the private or public service sectors are fought and beaten.

Aggressive force is becoming a meaningless endeavor and those who cling to it are stuck in the past and living a lie. It is not police or the military or anyone brandishing deadly force on behalf of the state who are the future of humanity. It is those who replace them with something less distasteful to human morals and sensibilities who are our future. And right now these new warriors are striking down the enemy one letter, word, sentence, paragraph, etc. at a time they and their foolish supporters clutch at that which is dying before them. There is no honor in victory through tragedy. Those who will change the world now held hostage by brutes and imbeciles will do it not one bullet, but rather, one keystroke at a time.

So in the future, as me and my keyboard are whupping the ass of you ideological has-beens, please refrain from ironically using your keyboard to type fighting words at me. You can’t believe how stupid that looks and what it actually says about you to the smart people who will make an real difference in our present and future world. Besides, it is not even an insult, as you so foolishly believe it to be.

I am a Keyboard Warrior and proud of it.