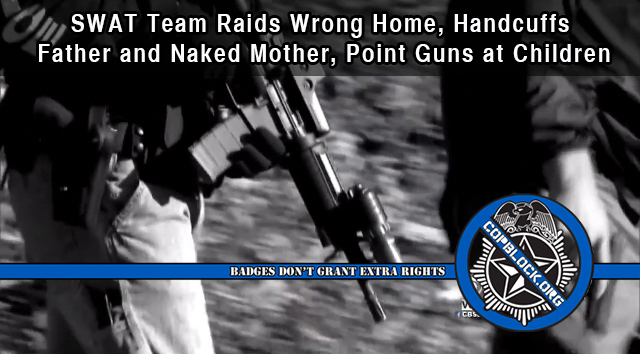 A Massachusetts family is left traumatized after a SWAT team conducted a surprise, no-knock raid in the early AM hours on their apartment, but it turned out that they had the wrong address – an occurrence all too common now in the United States.

Bryant Alequin was getting ready for work at 5:30am while his wife, Marianne Diaz, and their two children, aged seven and 18-months, were still asleep in their beds. Alequin then heard someone charging up the stairs when all of a sudden a group of  SWAT police broke through the apartment door with their guns drawn and pointed at him.

When Alequin frantically screamed for his wife and children who were still sleeping, the SWAT team allegedly told him to shut up and would not give any information about why they were there.

Soon after police broke into the apartment, Alequin’s wife had woken up to the sounds of the doors breaking down and knelt with her frightened children, praying, while police officers came into the room pointing guns at them.

At this point, both parents were handcuffed by police, still not knowing why.

Diaz, still naked, was then body-searched by a female officer for ten minutes while they tried to figure out whether or not they even had the right address.

“It was terrorizing, and the worst thing I’ve ever been through in my life. They were loud, vulgar, and disgusting in behavior . . . “I want some answers as to why they did this to my family and why they had to terrorize us the way that they did,” Diaz said.

Massachusetts State Police had apparently conducted the raid to find a man named Shane B. Jackson Jr., 36, who hadn’t lived at the apartment since February.

District Attorney Joseph Early released a statement defending the actions of Massachusetts State Police after the botched raid, arguing that raid was executed based on the “best intelligence at the time.”

The district attorney apparently didn’t take into account that Shane B. Jackson Jr. had already been arrested by Massachusetts police two weeks prior and that his new address was already on file.

Although law enforcement officials are standing by their actions, the family’s attorney, Hector Pineiro, believes that it is clear the district attorney’s office is not going to look into the matter because they are already removing blame from police. Pineiro and the family are demanding a full investigation.

“You can imagine 10 officers looking and pointing guns at a naked 23-year-old mother protecting her two kids. The horrific language and pointing of weapons at children cannot be justified under any circumstances,” Pineiro stated. “This botched gun raid, without any doubt, is about an innocent family with two children — one disabled — who were utterly terrorized and abused as a result of the grossly reckless conduct exhibited by (police).”