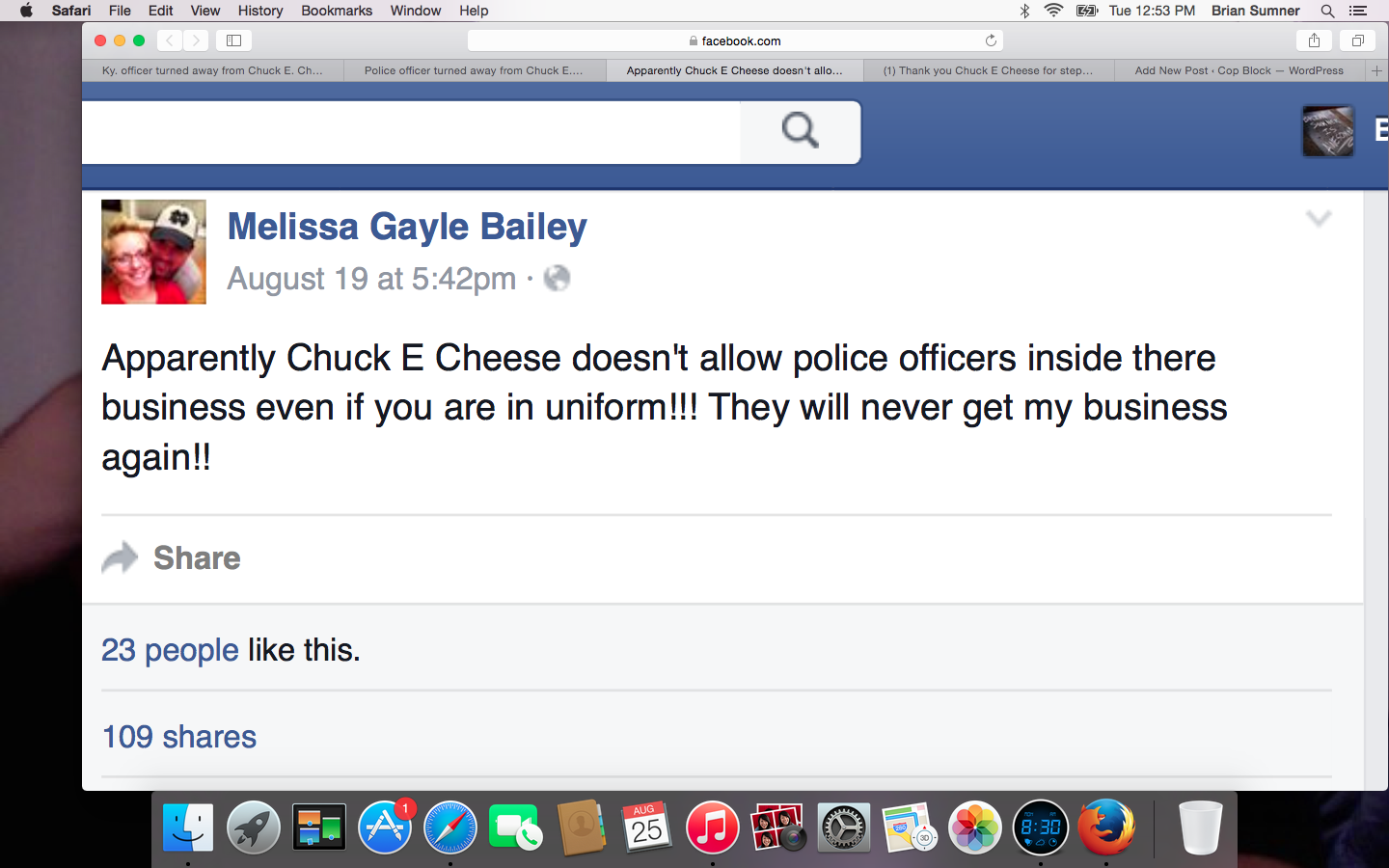 Another cop was refused service at a restaurant. This time for being openly armed. Chuck E Cheese, the popular kids pizza wonderland, does allow uniformed officers to carry their weapons, but this officer was wearing a polo shirt with the word police stitched on it, hardly a uniform especially when off duty.

Edmonson Sheriff Shane Doyle had this to say

“I was upset, I was shocked for that officer and also for all the patrons there because you know if you have an obvious police officer and they’re wearing police clothing, then I don’t understand what the problem would be having someone like that with the training and experience of a police officer into an establishment,”

Lets compare this statement to this this officers “uniform” for a second. She was wearing street clothes, but the top happened to be a polo shirt with the word “Police” emblazoned on it. Any Joe off the street can purchase that on the internet. Its more a recognition of affiliation than a uniform

I give the employee kudos for turning this officer away. If anyone wearing a collared shirt with the word “police” stitched into it can expect to have their actions go unquestioned, this opens up opportunities for catastrophes to happen, due to an unquestioned trust in law enforcement.

Why does this mother feel so inclined to carry a firearm around her children? Does she not trust the abilities of her co workers to keep her family safe when she is off duty? If she is afforded the right to defend her family with lethal force, why aren’t you? Has she beed granted extra rights based on her position and title?

If we are supposed to trust her with a firearm around our children, isn’t it reasonable to expect her to trust us with firearms around her kids? After all according to an FBI report released last year every demographic in America is at all time low when it comes to violent behavior except for Law Enforcement. Chuck E Cheese has apologized to the officer, and confirmed their policy to allow cops to carry guns in their restaurants. They also made special apologies to the cop on her Facebook page, and twitter accounts. Shane Doyle has decided not to lead a boycott against the establishment as they apologized.

Cops are often the most dangerous people to have around your children. An officer given a speech on gun safety to a class of children, shoots himself in the leg less than 5 feet from the elementary aged kids. When they held up the assault rifle, everyone in the room told him to put it down.

This cop shot himself in the hand at the gun store. Anyone with any firearms safety knows you clear any weapon after it is handed to you, regardless of who hands it to you and you never point a weapon at anything you aren’t willing to shoot. This cop demonstrates a lack of training and discipline, as well as putting everyone at the counter in danger of serious injury or death with his careless actions.

Indiana police chief David Counselor shot himself in the leg at a gun store. This was not the first time he had shot himself with a firearm, and by way he carelessly handles firearms at the gun store I am not surprised.

Darryl Jouett walked into an elevator with a box of donuts, then for some reason pulled out a gun started waving it around, and somehow shot himself.

Training or not cops have shown themselves to be untrustworthy of weapons, there negligence goes beyond personal injuries, and now causes an average of 3 deaths a day. In fact they are so quick to go for their guns, they shoot at each other.