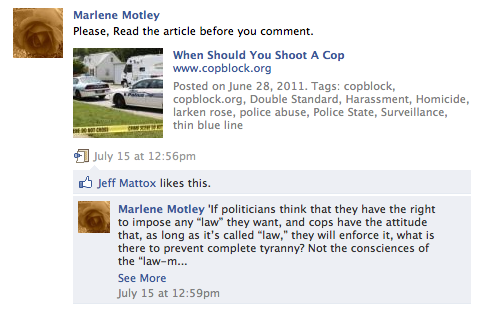 Stephen D. Foster Jr recently wrote an article at Addicting Info titled, “Indiana House Approves Bill to Allow Homeowners to Kill Police Officers.” The article discusses Senate Bill 1, from Indiana, which states homeowners have the right to shoot and kill police officers who ‘they believe’ are unlawfully entering their home. Stephen goes on to say:

The key word there, is ‘believe.’ People have different beliefs when it comes to the police. Most people respect the boys in blue and understand that they are just trying to do a dangerous job that doesn’t exactly pay well. Some, on the other hand, have no respect at all for police and believe them to be the enemy at all time, whether they have a warrant or not. But it’s a particularly risky situation that Republicans are putting police officers in, because in some situations police officers enter homes when they have sufficient reason to believe that a crime is taking place. For example, if a police officer is walking by a home and a woman screams because her husband is beating her mercilessly, there isn’t time to wait for a court approved warrant to enter the home. Under Senate Bill 1, which passed by a 74-24 vote, the husband could shoot and kill the officer for entering his home and get away with it. And there are many other situations where police may deem it necessary to enter a home, such as the situation in which the Indiana Court ruled.

Fry’s colleague, Democratic Rep. Linda Lawson, a former police captain, says the bill would create an “open season on law enforcement,” and is opposed by “1,250 state police officers and 14,000 men and women in blue, brown and green.”

Republicans claim the bill actually protects police officers, but what it really does is give paranoid gun toting anti-government nut jobs the legal ability to shoot any officer that steps in their home or on their property. It allows those who commit a crime to have a safe haven from police officers who pursue them. All a criminal needs to do is run home to legally resist arrest. Like many laws, people will more than likely misinterpret it to mean they can kill any police officer in their home as long as they think they are there illegally. And many people aren’t going to see a difference between an officer with a warrant and an officer without one. Many people believe that police have no right to exercise authority in their homes whatsoever, even if a crime may have been or is being committed, even if there is a warrant. This bill takes home defense to an entirely new level. We aren’t talking about thieves or murderers, or rapists entering homes. This bill is about police, who risk their lives on a daily basis to keep people safe. Nobody has the right to shoot and kill a police officer for doing their job. Instead of letting judges and juries sort things out, Republicans in Indiana believe more gun play is the answer to keep police in check, and such beliefs are going to result in more dead civilians and dead police.

I’d like you to compare Stephen’s thoughts with a part of Larken Rose’s post, “When Should you Shoot A Cop“:

There were once some words written on a piece of parchment (with those words now known as the Fourth Amendment), that said that you have the right to be free from unreasonable searches and seizures at the hands of ”government” agents. In Indiana today, what could that possibly mean? The message from the ruling class is quite clear, and utterly insane. It amounts to this: “We don’t have the right to invade your home without probable cause … but if we DO, you have no right to stop us, and we have the right to arrest you if you try.”

Why not apply that to the rest of the Bill of Rights, while we’re at it? ”You have the right to say what you want, but if we use violence to shut you up, you have to let us.” (I can personally attest to the fact that that is the attitude of the U.S. “Department of Justice.”) “You have the right to have guns, but if we try to forcibly and illegally disarm you, and you resist, we have the right to kill you.” (Ask Randy Weaver and the Branch Davidians about that one.) “You have the right to not testify against yourself, but when we coerce you into confessing (and call it a ’plea agreement’), you can’t do a thing about it.” What good is a ”right”–what does the term “right” even mean–if you have an obligation to allow jackboots to violate your so-called “rights”? It makes the term absolutely meaningless.

Of course, on a practical level, openly resisting the gang called ”government” is usually very hazardous to one’s health. But there is a big difference between obeying for the sake of self-preservation, which is often necessary and rational, and feeling a moral obligation to go along with whatever the ruling class wants to do to you, which is pathetic and insane. Most of the incomprehensible atrocities that have occurred throughout history were due in large part to the fact that most people answer “never” to the question of “When should you shoot a cop?” The correct answer is: When evil is “legal,” become a criminal. When oppression is enacted as “law,” become a “law-breaker.” When those violently victimizing the innocent have badges, become a cop-killer.

The next time you hear of a police officer being killed “in the line of duty,” take a moment to consider the very real possibility that maybe in that case, the “law enforcer” was the bad guy and the “cop killer” was the good guy. As it happens, that has been the case more often than not throughout human history.

IMO, law didn’t need to be written for one to know when they can or cannot defend their life or property. It’s unfortunate people are taught to submit to police without question while being encouraged to stand up to bullies, abusive husbands and other non government connected person.

What do you think? Is this going to solve anything? How will police react to this?