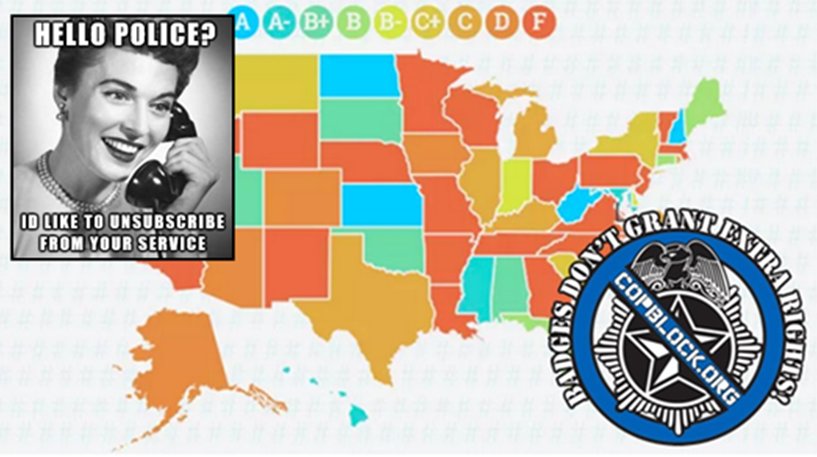 With the rise of digital technology, it has become easier and easier to document the transgressions of state enforcers like police – so it is no surprise that according to a social media analysis by drug treatment and awareness website drugabuse.com, almost half of Americans hate their local police department.

The study found that a little over 47 percent of Americans gave their police precinct a grade of D or F with states like Arkansas, Idaho, Missouri, Virginia, and Georgia exhibiting the most overall dissatisfaction.

37 percent of Americans gave their police department an F grade, with the national average being a D but grades of A relating the most overall satisfaction came from states like New Hampshire, North Dakota, West Virginia, Kansas, and Hawaii. The study also looked at the breakdown of expressed sentiment towards police by city.

Interestingly, despite that some states like Texas rank above the national average – when looking at data city by city – it exhibited three of the lowest ranked cities: San Antonio, Austin and Fort Worth – which all received an F grade.

Other cities that received an F score include Denver, New York City, Phoenix, Miami, Los Angles, and Ferguson, MO – who received the lowest recorded sentiment score in the nation.

Its important to note that no city or state received a positive overall sentiment score but the cities with the “least-worst” ratings were Columbus, San Deigo, and Seattle, who garnered A grades – and Houston, Washington, and Charlotte, who received grades of B-plus or B. The study, which analyzed over 766,000 tweets about sentiment toward law enforcement during the first five months of this year, illustrates the reality that unlike a private or market entity, consumer sanctification has nothing to do with the prolonged longevity or success of government-run services like police departments.

Whereas unsatisfied customers of private security and protection firms can quickly withdraw their support if they find the actions of such businesses disagreeable – in government – repeated failures, abuses, and ineptitude only results in larger and larger budgets – paid for by the extracted wealth of citizens against their will under threats of force and violence.

Johns Hopkins University professor Philip Leaf says the reasons for the low scores vary, but maintains that new media interest, in conjunction with technology that can record incidents of police abuse, has led to new conversations about law enforcement – especially in neglected communities.

“There has been a negative perception of police in many communities for a long time, Leaf said. “There just haven’t been conversations with these young people or in the media about it until recently.”

“There hasn’t been an upsurge of disconnect with the police,” Leaf added. “With cellphones, there has been documentation of things that people have been talking about for a long time. People haven’t been believed, and now it’s hard not to believe it, if you see it on TV.”