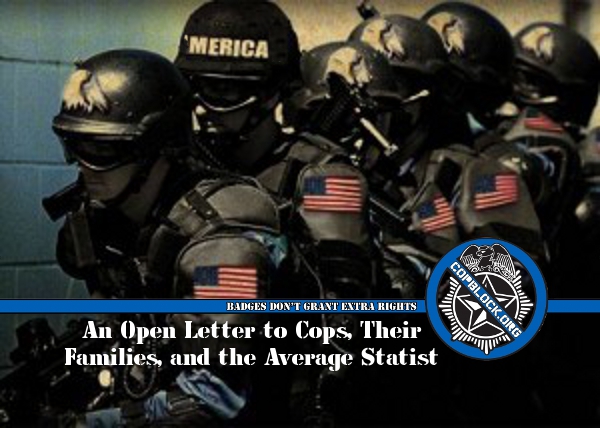 (Recently, Sean N. Gruber, the Author of this Article – had a close family member targeted for both Physical/Actual and Social Media intimidation, by the Nye County Sheriff’s Office and their supporters, over a Facebook post [“Always nice to wake up to good news. One less tyrant in, NV.”] commenting on an incident in which a Reno, NV area police officer was killed on duty. That targeting ultimately resulted in that family member being fired from a casino job in Las Vegas. In addition, Sean himself was visited by detectives with the LVMPD after a similar post on Facebook about a year ago.

Yeah, the “people” that work for the Sheriff’s Department are calling around asking questions and insinuating a “reprisal.” One might ask, “A reprisal for what? But then one would have to be far more rational than the Nye Sheriff, to get the answer to that.

The following editorial, written in response to those intimidation tactics, represents Sean N. Gruber’s opinion on the subject and no one else’s.)

On August, 15th 2015, Carson City, Nevada, Sheriff’s Deputy, Carl Howell was shot and killed while responding to a “Domestic Disturbance” call. The “Suspect” (isn’t it funny how the language has been manipulated to “help” you decide who the “good guy” and who the “bad guy” is?) also succumbed to gun shot wounds inflicted at the scene. Immediately, before anyone knew anything about the facts of the case, a certain segment of the population had already taken a side. Not surprisingly, that segment is comprised of cops, their families, and the average Statist walking the street, who won’t even consider the idea that, sometimes, cops NEED to get shot! “He was a hero,” they’ll say. And if one says something to the contrary of this brainwashed, state worship, non-think, it might cost them their job, freedom, or life.

Imagine the flag draped coffin and the sad bag pipe music. Imagine the bereavement badge icon on Facebook. The cute little, “my husband is a cop” thin blue line meme’s and don’t forget the “They risk their lives for YOU everyday, to protect our community(!)” propaganda. (Sorry if I am making my fellow Cop Blockers sick – but I’ve had to see a whole lot of this over the last few days and I thought maybe you should be reminded of how nauseating it can become.)

To you cops, their families, and the average Statist walking the street, who won’t even consider the idea, that sometimes, cops NEED, to get shot. No you/they don’t, “risk their lives for us everyday.” They steal (traffic tickets, asset forfeiture, etc.), they kidnap (drug arrests, traffic violation arrests, no permit for a concealed firearm, illegally collecting rainwater, etc.), and they kill (the final result for anyone who resists the before mentioned, or who is mentally ill, homeless, disrespectful or just stupid enough to not realize how dangerous you people actually are) for a paycheck, everyday!

Notice to all the cops, their families and the average Statist walking the street, who won’t even consider the idea, that sometimes cops NEED to get shot, there are now two sides in this Country. And I’m on the side that is going to assume the cop DID have it coming, and the “Suspect” didn’t. I don’t consider this ideal. And WE didn’t cause this situation. The “police” in this Country enforce the “Law.” Whether that “law” is just or not. They are actually proud of this. “If you don’t like the law, change it” you say. Well, yes, we’ve tried that.

And if the stifling of any potential third party proves nothing else – it is that the status quo and the powers that be aren’t very receptive to the idea of ANYTHING changing. And accordingly, the enforcers of “laws” that violate and injure human beings are going to be given no more moral “get out of jail free” cards. We don’t want to hear your “peace officer” shit – because if that was ever true – which I am starting to sincerely doubt, it isn’t anymore. You are the enforcers of our, would be masters’, dictates. You are the “Standing Army” The Founders of this Country warned us against. You are “Red Coats” and your supporters are “Loyalists.” And you are all going to remember the lesson of Nuremberg if you don’t change your course of action, quickly. (Since I know educated people don’t generally become “police officers” or cops’ wives, I’ll remind you here that the lesson of Nuremberg was and is: “I was only following orders” doesn’t save one from the gallows.)

You’ve lost the benefit of the doubt. You’ve shot enough dogs. You’ve shot enough un-armed people, and choked a man to death over a cigarette tax. We know about Kelly Thomas. We know about Erik Scott. We remember you circling round and round Rodney King with night sticks. We’ve seen the videos. We’ve watched you assault people that caught you on video, assaulting OTHER people, and then try to cover your asses, by breaking someone’s cell phone or camera and then compound your criminality even further, by attempting to charge the video maker with some “crime.”

You’ve LOST the benefit of the doubt, and I’m not sure you should have ever had it. And I’ll tell you “Law Enforcement Agents” (< remember: “Political speech is designed to make lies sound truthful and murder respectable.” –George Orwell) you don’t help the case that you try to make, that you “are heros who protect man’s rights” when you GO AFTER people who speak out against you.

You want to get us fired from our jobs? You want to smear our names on the internet? You want to make memes showing our address? You go after the EMPLOYER of the persons who speak against you? You attempt to harass and intimidate a Corporation – who pretty much has to be “politically correct”- into taking away your opponents very means of making a living? Fuck You! Do I not show enough tact over your “fallen brethren?” Did I not show sympathy? Well, Goddamned Skippy! And we DIDN’T get to that place in a vacuum.

I’ve been witness to a person be ROBBED, literally, by a cop. But there was nothing I could do. If I would have come to his aid, despite my skill with firearms and the fact that I was armed, eventually I’d’ve died and you would have quickly used the same language that I described at the beginning of this article to convince the Knavish, Yapping Little Dogs that the Corporate Media are, into convincing everyone else, that I deserved it.

The only little yappy dogs you don’t like to shoot, it seems, are the one’s that do your bidding. And unfortunately those yappy dogs aren’t some poor individual’s beloved pet. In short, you’ve acted like a privileged, “Samurai Class” for too long and the “system” has done little to nothing to stop it. We’ve observed the scare tactics and outright intimidation methods you use on anyone foolish enough to go through your “proper channels” to try and do something about your abuses and we’ve had enough of it!

So, again and finally, in conclusion, we aren’t sorry when you get hurt or killed “in the line” of what you imagine to be “your duty.” (Author’s note: I’m a thinker, a writer, a radio host. That’s what I do for a living (not that I make a good one). I’m nothing more, so if you decide to target me with violence, you should know, you do nothing but prove my points.)