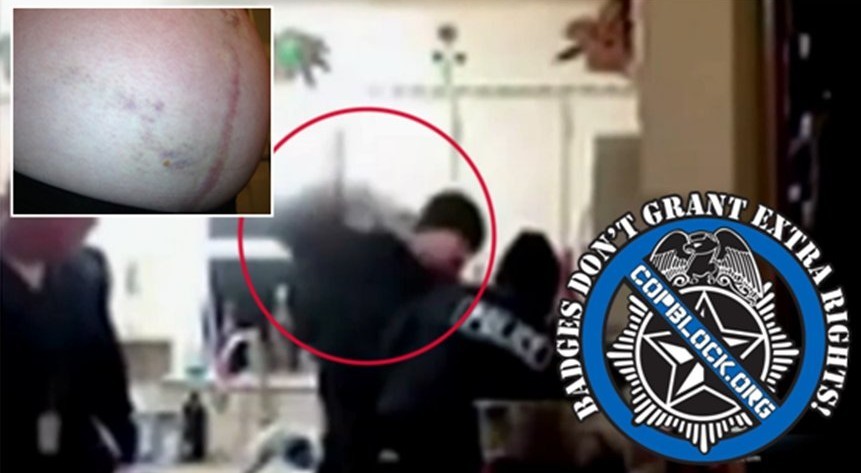 A Hunt County, Texas sheriff’s deputy filmed by surveillance cameras punching a pregnant woman earlier this year has been cleared of any wrongdoing, police said Monday.

Deanna Robinson, who was 8-months pregnant at the time, said Hunt County deputies and state CPS workers came to her parents home on March 4 to remove her 18-month-old son after they received allegations from an older sibling that she and her husband had been involved in a fight.

“I stepped in front of my son and put my hands up and began screaming, ‘No, you’re not touching my kid,'” Robinson said. “They all just took offense that I knew my rights and asked for my rights to be respected. You’re here to take my kid! Show me the warrant or the court order!”

Surveillance footage filmed from inside the residence shows two officers pushing Robinson into a corner of the kitchen as she screams, then deputy J. Robinson can be seen punching her two times.

The video abruptly cuts off but the woman says the deputy struck her about three more times before she was arrested and charged with resisting arrest, interfering with child custody and assaulting an officer.

“It’s ridiculous, it’s insane,” Robinson said. “I was handcuffed almost immediately and shoved into a corner by two giant men. I wouldn’t have had an opportunity to assault anyone. There’s nothing to warrant what they did to me.”

In a statement released Monday by Hunt County police, officials said “the outcome of [an] internal investigation has determined that no policies have been violated” by deputy Robinson.

The department said the officer received a no-bill ruling by a Hunt County grand jury who determined that their was not enough evidence presented before it to warrant criminal prosecution. Deputy Robinson has since returned to full duty.

It is unclear whether Deanna Robinson, who is an Iraq war veteran, will pursue civil action against the officer.