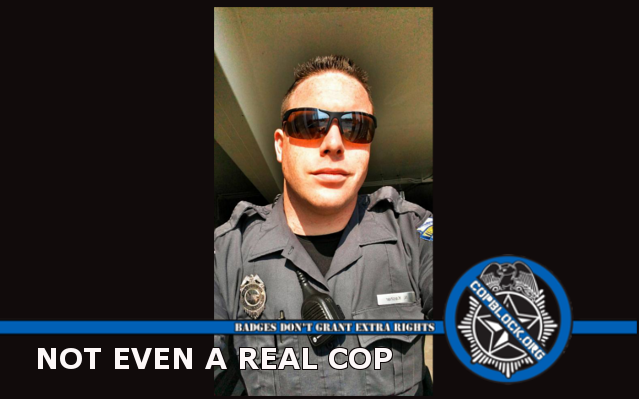 A video has been making its way around the internet over the last few days of a supposed cop rapping in his car.  His name is Nick Kashar and goes by the name of King Kashar [on social media].  The video is not even mildly entertaining, but it caught my attention because so many people were passing the video around on Facebook.  A lot of people are talking this guy up likes he’s the next Eminem or something.  While a visit to his Facebook page paints a totally different picture of this guy and what an unprofessional disgrace he is to public service.

According to Nick’s official Facebook page, (picture right) he is not even a cop.  It turns out that this guy works for a private security company that is contracted through Denver Transit.  It’s a good thing that this guy is not a real cop, because his posts show just what kind of unprofessional this guy really is.  The sad reality is that he’s still allowed to carry a gun and to write citations, while arresting people, just like a real cop.

In another post (pic below) he mentions again that he is not a cop, but was offered a job with the department, but turned it down because of the current state of affairs with law enforcement across the county.  I would have found that decision to be noble had it not been for the above mention of pepper spraying homeless people and the other posts that will be shared in this article. Seeing as how this private security company is contracted through Denver Transit, these guys are being paid with taxpayer money.  His comment about pepper spraying homeless people is a perfect demonstration of the mindset of many police officers and obviously the company that this guy works for.

But wait, it doesn’t end there.  He goes on to joke about going on a raid and keeping confiscated funds – pictured below.  To be fair, he could be saying this all in jest.  The real issue here is that he and his company are being paid by the taxpayer.  He is in his uniform in the videos and his pictures which also makes the company that he works for look like a bunch of amateurs.  With him even mentioning what the current “Police Community is coming to,” you would think that mentions of brutalizing the homeless and stealing money would not be something to joke about and post to his Facebook account for anyone to see. Several writers here have mentioned one possible way to fix policing is for it to be conducted by private businesses so that we as customers can choose who we pay for protection and stop paying when they act like this guy.  Our current system of being forced to pay for police services regardless of what we get in return on our investment is not working.  Those that would work for these companies could concentrate on their specialty and probably make a lot of us unhappy customers happy.  They would also get more job satisfaction knowing that what they’re doing is serving a community, versus  the current situation of extortion by way of taxes.

These companies would have to have much more stringent selection criteria for their officers for this to work.  IQ levels would have to be higher, it would be preferred that they have a degree, and an in-depth psychological screening would have to be done to ensure they do not hire people like the current group of storm troopers that currently patrol the streets. Especially since in the private sector business would be on the hook for what taxpayers have been paying in regards to police brutality settlements.

I’m betting that Nick King Kashar would be weeded out rather quickly.  The fact that an actual police department offered this guy a job as a police officer is just another example of how low they set the bar to hire cops. Or a scary peek in to what D-bags they seek to hire.