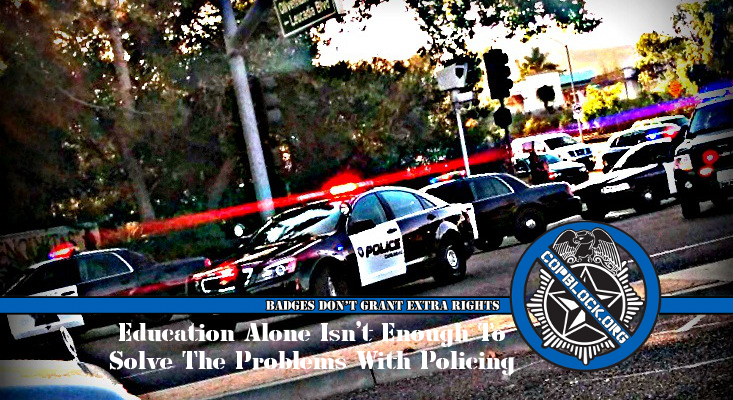 From The Guardian comes a video by Civil Rights Attorney Brian Stevenson:

Mr. Stevenson has a compelling story to tell about police brutality as a black, male, civil rights attorney. He details an experience he had when he was 28-years old, wherein two police officers pointed a gun at him and shouted, “Move and I’ll blow your head off!” They then proceeded to conduct an illegal search of his vehicle. The first thought Mr. Stevenson had when threatened by police with a deadly weapon, was naturally, that he wanted to run. At the time, he resisted the urge to do so, but rightly observes that many reasonably frightened, black, young men might not have had this same foresight.

Mr. Stevenson goes on to quote some disturbing statistics with respect to black people and the justice system. For instance, black men are eight times more likely to be killed by a police officer. Black people are also six times more likely to go to prison for committing the same offense as a white person. He cites another statistic indicating one in three black babies are expected to go to jail or prison in his or her lifetime, though, other statistics indicate that currently, it is already the case that nearly half of all black men, and about 40 percent of all white men have been arrested by the age of 23 (here).

After setting forth some serious and legitimate concerns about policing, the justice system, and their relationship with race, Mr. Stevenson turns to political drivel as his proposed solutions for the problem. He begins by explaining that President Obama (the guy responsible for operating Gitmo, continuing the drug war, and killing countless innocent people, including children, in the Middle East) has appointed him to a task force for review of policing in the current century. From hereon out, Mr. Stevenson’s message necessarily, and predictably loses force and significance.

Mr. Stevenson reiterates the usual drivel about poor training. He states that “police need to live in the community where they work” and need to be “trained and taught to manage implicit bias.” Further, police should be tasked to”protect and serve young black men” rather than kill them. He goes on to imply what is needed to rectify these horrific circumstances is merely education, claiming, “We have a choice to allow the hatred of the past to be handed down to our children, or to write a new story…”

As if Americans “talk[ing] about the legacy of slavery” and removing confederate flags would solve the problem of police being treated like infallible gods in this country. Literally, they are viewed as heroes, even as they repeatedly announce that all they care about is their personal safety (for instance, see here and here). The public repeatedly gives police free reign to murder, because their jobs are allegedly difficult, even though their profession usually doesn’t even make the top 10 list of most dangerous jobs. As if racism is the only problem when it comes to police brutality, and that police officers don’t often beat, rape, and kill people of other races too. As if a few political correctness seminars and sensitivity training sessions could erase the deeply-ingrained dictates of the Thin Blue Line.

The truth is, none of the problems inherent to policing will change until the system is gutted, turned inside out, or completely dismantled. As long as police are funded by taxes, they will not be responsive to consumer demands and dissatisfaction, because they will never face customer pressure or the threat of going out of business for abusive practices. As long as police departments are granted any sort of immunity against civil suits for police abuse, police will not be held personally or financially accountable for their violent acts, and will not be deterred from such acts. As long as good police officers face retaliation, ostracism, and demotion for doing the right thing, a significant number of bad police will be allowed to persist.

Not that we should expect any kind of profundity or truth from someone appointed by O”bomb”a. The title of Mr. Stevenson’s video, “Police Brutality In The United States Should Come As No Surprise,” is poignantly accurate. Yet it should come as no surprise precisely because people think as he does – that it’s a matter of a few training sessions, history lessons, hand-holding, Kumbaya-singing with your friendly neighborhood cop – that will bring change.