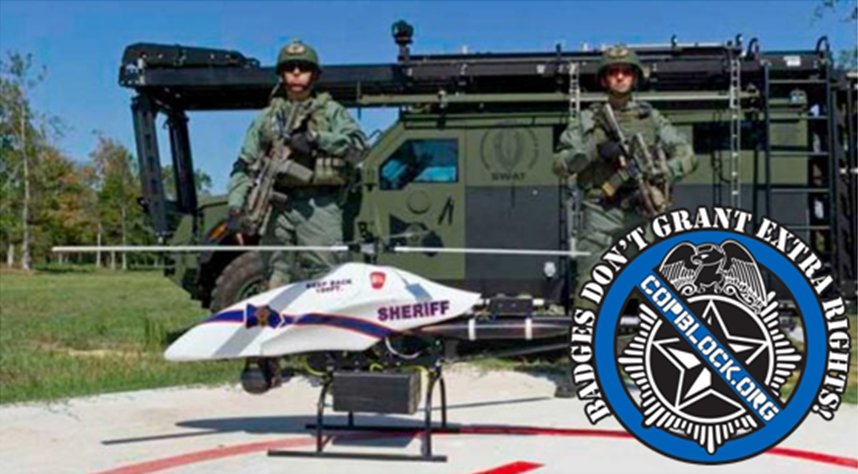 North Dakota has become the first state in the nation to legalize the use of armed police drones equipped with “less than lethal” weapons like tasers, tear gas, sound cannons, and rubber bullets.

House Bill 1328 – which was first drafted to ban all weapons on police drones and require officers to obtain a search warrant before using the technology in searches – was amended at the last minute by a law enforcement lobbyist with close ties the drone industry, the Daily Beast reports.

“This is one I’m not in full agreement with. I wish it was any weapon,” the bills Republican sponsor, Representative Rick Becker said expressing concerns about police firing on criminal suspects remotely. “In my opinion there should be a nice, red line: Drones should not be weaponized. Period.”

Police and lobbyists assure lawmakers that the drones will only be used in non-criminal situations, like in searches for missing persons or documenting accidents, but aerial drones have already been used in the state to make arrests.

In 2011, Rodney Brossart was caught by a Department of Homeland Security drone for the crime of cattle rustling after a few cows wandered onto his land and he refused to take them back to their owner.

According to the Daily Beast, “a representative from the North Dakota Department of Commerce, the vice president of an economic development group, the founder of a drone company, and the director of the University of North Dakota’s drone major program all testified against the bill.”

Law enforcement officials and drone manufacturers maintained however, that the original version of the legislation would of had a “chilling effect” on the drone industry in the state and that civil liberties must be sacrificed in the name of technological innovation.

“It’s really all about the commercial development, which is where all of this is heading,” Keith Lund of the Grand Forks Regional Economic Development Corporation said. “If [a law] is somehow limiting commercial, law enforcement development… that is a negative in terms of companies looking and investing in opportunities in the state of North Dakota.”

According to Federal Aviation Administration documents obtained by MuckRock.com, 401 drone “operations” were performed by the Grand Forks County Sheriff’s Department alone in the state from 2012 to September 2014, resulting in 80.5 hours of flights but Sheriff Bob Rost – who fought for the amended version of the bill – said his department’s drones are only equipped with cameras and that he doesn’t “make a practice of snooping on people.”

Well that’s a relief. I know North Dakota residents will feel much better now – especially since the sheriff admitted that drones will be used in the near future to conduct criminal investigations, and said that officers would act in good faith to obtain warrants if they decided to use them for surveillance operations.

So in other words, just trust the police folks. Having it codified in law that warrants be an automatic prerequisite for such activities means questioning the integrity of costumed and badged enforcers – and we know should know better.

According to the ACLU, police drones are fundamentally at odds with the Bill of Rights and represent a new threat to Americans that compromises liberty for security. The group supports laws to restrict law enforcement’s use of them.

“It’s a common practice of both law enforcement and the larger intelligence community to say that technologies are being used on very bad people in very extreme cases,” journalist Sarah Nelson, who has studied police use of drones, said while testifying about the bill in March. “This is an effective strategy because the public sees themselves as vastly different from those bad people. In response to this argument, I would urge the committee to remember that liberty is eroded at the fringes.”

So-called “less-lethal” weapons can often be deadly. According to the Guardian, 39 people have been killed so far in the United States this year by police tasers alone. Rubber bullets can also kill, and other “non-lethal” weapons like tear gas – if inhaled too much of – can cause grave injury and death as well.