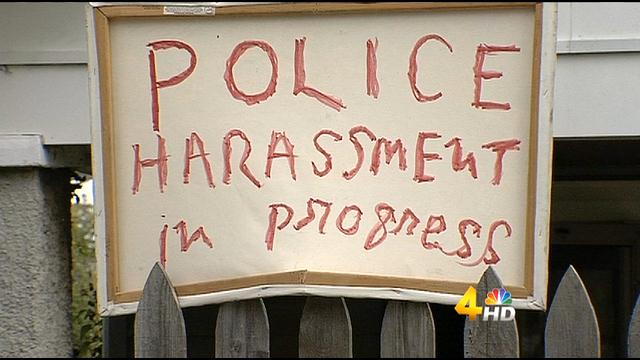 The post below was submitted via the CopBlock.org submission tab by “Tom Freeman” (name altered for publication). The views, facts and opinions expressed herein are his own.

BACKGROUND: In 2012, the Harford County (HARCO) Sheriff and federal agents (ATF, DHS, et al) illegally raided and conducted an illegal search and seizure of private property because then SGT (now LT) – “I am a NAZIS” – Penman testified under oath that she felt the property owner “had a ridiculous number of guns”. After consulting with an unknown State’s Attorney in the middle of the raid, then SGT – “I am a NAZIS” – Penman learned their activities were illegal and proceeded to cover her and her conspirators tracks by falsely charging their latest victim with numerous false and unprovable crimes totaling a 150 years worth of prison time. Unwillingly to take a plea deal, HARCO State’s ASSistant Attorney Scott Lewis attempted to intimidate and coerce their victim into a plea deal on at least two occasions by falsely accusing the victim’s family of being “conspirators” almost 18 months after the victim was initially charged. The victim was found “not guilty” on a lesser charge that would have prevented the victim from ever exercising his 2nd Amendment Right and then the only HONEST HARCO CIRCUIT COURT JUDGE ruled that the HARCO Sheriff violated the victim’s and victim’s family 4th Amendment Right.

REAL REASON FOR THE UNLAWFUL TRAFFIC STOP CAPTURED IN THIS VIDEO: On a recent trip to Court regarding more false charges, the victim publicly embarrassed a HARCO Sheriff by knowing and exercising his Constitutional Rights! Within 48 hours, the victim was pulled over by two Maryland State Police (MSP) who falsely accused him of not wearing his seatbelt. As punishment for the victim’s “Contempt of Cop” (phrase commonly used by cops when a cop is publicly embarrassed) committed 48 hours earlier, the victim was retaliated against by cops other than the HARCO Sheriff, another tactic commonly used by cops and becoming more commonly exposed within the USA. Yes, this was clearly a set-up by the HARCO Sheriff, as you can see, one of HARCO’s finest (lol) in the video overseeing the two MSP while behaving like a true coward and never making himself known to the victim like the coward that all HARCO Sheriffs are.

Of course, the MSP also have reason to retaliate against the victim as they were recently told by the victim that Case #15-MSP-019757 would be exposed to the public. In Case #15-MSP-019757, the victim’s adolescent son and two friends were robbed at gunpoint by another white adolescent. Despite sworn testimony from three victims of armed robbery and positive identification of the criminal perpetrator which included photographic evidence, social media showing guns and drugs owned by the adolescent, plus the address of the criminal perpetrator, the white MSP involved with the complaint refused to arrest and prosecute an armed robber who was white. Notice that two African Americans made the stop which may have been a conscious or subconscious point regarding the robbed victims and victim who are Native American.

BOTTOM LINE: Since at least 2012, Maryland law enforcement have been illegally and falsely charging the People of crimes with impunity. When confronted by someone who knows the law, they WILL attempt to use immoral and illegal tactics to intimidate and coerce their victim. Such tactics include threatening to charge a victim’s family with false crimes and even unlawfully arresting and falsely charging a victim’s family with crimes. This video shows Maryland law enforcement actually using their New Amerikan weapon of tyranny to intimidate and coerce citizens with impunity TODAY!

1) 00:20 – Notice the cowardly HARCO Sheriff in the mirror who never identifies himself.

3) 06:55 – After the victim was asked for his driver’s license, he requested to know the Maryland statute that required the victim to show it. The MSP had to spend five minutes looking up a non-applicable statute and tried to lie to the victim claiming it required him to show his driver’s license. Watch the MSP try to remove the law book from the hand of the victim as he attempts to read the statue and the MSP become more forceful in removing the book as the victim realizes the Maryland statute applies to people in private areas and states that WHEN a person voluntarily surrenders identification upon request of a uniformed officer that person who surrenders the identification voluntarily also consents to the waiver of their 4th Amendment Right under the law. The MSP just lied in an attempt to coerce and intimidate an American and Maryland citizen to voluntarily waive their 4th Amendment Right under the Constitution. This is something the victim was not even aware of! The viewer should be aware that an African American MSP had his service weapon unholstered, cocked, and at the ready when he was politely asked to step back and refused. The MSP was looking for a reason to shoot the victim at this point in time.

4) 08:03 – The African American MSP with the weapon at the ready not in the video now claims that asking to know what law he is allegedly violating is now considered to be a lack of “cooperation”! I guess he also believes his behavior is not NAZIS-like at all.

5) 09:09 – Now we see first-hand the attempt to coerce and intimidate by threatening to charge a victim’s family member. Maryland State Law, TA-22-412, only permits the driver to be ticketed for conveying a passenger 16 years old or younger that is not wearing a seat-belt restraint. Maryland State Law DOES NOT permit the driver to be ticketed IF conveying a passenger 17 years or older that is not wearing a seat belt. The MSP were flat-out lying and appears to be incapable of telling the truth and simply admit he was mistaken about what he may have seen.

6) 09:35 – The victim keeps asking to see that he was not wearing a seat belt on the MSP video camera because he knows full-well that he was wearing his seatbelt. At this time, the victim learns for the first-time that the MSP DOES NOT equip their cars with video cameras. Is the MSP lying again? Please note a recent study involving police mandatory use of body cameras in a large California city resulted in a 90% drop in citizen reports of police abuse and a 60% drop in police using unnecessary force. If the MSP honestly does not have video cameras in their vehicles it is because the MSP knows full-well that the only proof of a crime having been committed is the word of the MSP and nothing more. Of course, I would love to believe that Maryland has been blessed with PERFECT MSP personnel but the news and alert citizens with video cameras prove it is simply not true.

7) 14:38 – At this point the MSP have violated the Supreme Court’s 4th Amendment Ruling in Rodriguez v. United States. Basically, there are two limits on the duration of a traffic stop. First, the stop has to end When (sic) the safety-related tasks are done (absent reasonable suspicion that turns the traffic stop into a Terry stop). Second, the stop has to end when the safety-related tasks should have been done (again, absent reasonable suspicion that turns the traffic stop into a Terry stop). Either limit is sufficient. In this case, the officer witnessed the victim with the seat-belt on when he approached the vehicle and there is no safety-related task to perform such as a passenger fastening a seat-belt. Furthermore, there was no need to check the driver’s license and registration as the driver had not violated any law. In fact, the only delay at this time was to bring a third MSP to the scene in an effort to trick the victim into identifying himself which you will see later when the MSP gets owned for violating the Constitution. The third cop is also a MSP K9 unit and was probably going to run the drug sniffing dog around the car to sniff for drugs but as they were communicating with the State’s Attorney during the stop they were undoubtedly told not to do it as that would have been a clear violation of the victim’s 4th Amendment Right.

8) 19:28 – You can hear one of the victim’s family express concern over being shot by the MSP.

10) 21:15 – HARCO Sheriff drives off after realizing his conspiracy efforts have failed.

12) 24:57 – You can see the MSP dilly dallying around an MSP cruiser unnecessarily extending the length of the stop. You can also see them communicating with the State’s Attorney on what to do.

13) 27:17 – Now you can actually hear the MSP on audio speaking to the State’s Attorney as the MSP wildly try to figure out how to arrest the victim and charge the victim with other crimes.

15) 30:05 – A victim’s family member makes a MAJOR mistake and takes the citation. If you are NOT BEING CHARGED then never accept a citation being given to someone else. The victim tries to recover from the mistake and points out to the MSP that he has not been duly served a citation. The MSP simply walk away and REFUSE to do their job and PROPERLY SERVE the citation.

Just another day in Maryland where its cops behave like fascists, make-up laws, and do whatever they want without any accountability.