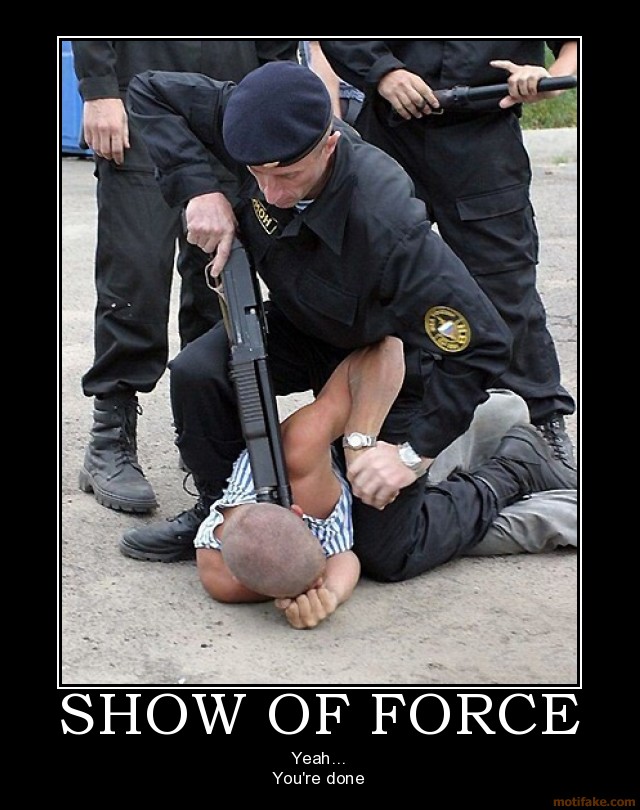 Do some critical thinking

The Chesterton Tribune reports that the Indiana House approved the “Right to Resist” bill by a vote of 74-24. The bill would protect residents of Indiana under the states self-defense law if they believe force is necessary to protect them from unlawful actions by a police officer.

However the bill does not give this privilege to someone who is committing a crime. That  change was made after police and prosecutor groups told lawmakers they worried the proposal as previously written would spark more violence toward officers. But stop and apply some critical thinking to that part of the bill and remember how many crimes there are on the books and how often people are accused of bullshit crimes during police encounters.

This kinda leaves it wide open to still let officers get away with illegal acts. All they have to do is charge with with the favorite “disorderly conduct” or “resisting arrest.” If this bill passes, would Pete Eyre then be allowed to have used force against the officers who drug him from the court for wearing a hat? He was never charged with any crimes, but with a law like this in place, I have reasonable suspicion to believe he would have been in order to say he was not justified in using force, even though I know Pete never would as he is an incredibly peaceful person as you can see in the video.

What about the bullshit crime of contempt of court, the crime Ademo was charged with when speaking his mind at the video arraignment of Pete after his arrest? Can’t resist if you’re committing a crime? Well you’re always committing a crime, whether you know it or not, the average person commits 3 felonies a day. I’ve probably committed 10 crimes just writing this article.

This is why I’m not too excited about this bill like most people are. It’s mostly posturing when you really break it down. I was excited at first, thinking freedom had scored a win in Indiana, then I saw the comments by State Rep. Ed Delaney

Rep. Ed DeLaney, D-Indianapolis, said the Supreme Court had drawn a “bright line” protecting police and that the public can contest illegal police actions in court or seek to have rogue officers disciplined.

“I believe this goes much too far and is capable of being misunderstood,” DeLaney said.

It’s all about protecting police, the State of Indiana doesn’t care about your rights against police. Just do a quick Google search on court cases where officers are accused of committing crimes and you will see how much advantage they have, mostly getting paid vacations or temp desk jobs. Ed is just regurgitating the same bullshit about suing cops in court, which never works.

Just check out this story from St. Louis, where out of 117 related police shootings in the last 5 years, all but 4 times the officers were cleared of any wrongdoing.  I could write forever on those types of instances, but instead just search “paid vacation” on our site and you will see what I am talking about.

One State Rep. who is also a former cop, is against this bill.

Democratic Rep. Linda Lawson of Hammond, a former police officer, told House members they shouldn’t back a measure that could lead to an “open season” by criminals against officers who are willing to sacrifice their lives to protect the public.

Open season? Fuck Linda Lawson, does she ever look at it from the opposite side? She’s worried about citizens being able to use force against cops if they think their actions are illegal? What about the motherfucking police having the right to use force on citizens they think are doing something illegal? Does that not declare “open season” on the people you claim to represent?

Does Linda really think people are that bad? That if given the right to use force against an officer illegally aggressing against them we would just start beating the shit out of police and murdering them at will? This is what cops do all the time.

This cop has the right to use force, up to lethal force, if he thinks someone is doing something illegal. Is this “open season” on citizens? The answer is yes. And since this is a change to the status quo, the cops predictibly are speaking out, using the only thing they have in their arsenal, fear.

“We believe people have the right to be secure in their homes,” said Hendricks County Sheriff Dave Galloway. “But the people who hear about this law are going to think it’s okay to kill a law enforcement officer. What you and I think is ‘reasonable’ isn’t the same as somebody high on meth. They’re going to shoot first, and ask questions later.”

Maybe if you left peaceful people alone, like a lot of drug users are, you wouldn’t have to worry about them shooting you.

It’s that phrase, “if the person reasonably believes the force is necessary” that alarms bill opponents.

And what is wrong with everyone being able to interpret the law? Why should only people with proper government permission be able to interpret this? Alot of cops are freaking out, what they forget, whether it be purposely or not, is that the courts routinely side with the badge. It’s the reason I am subdued in my excitement over this. How often do you even see a police do something clearly illegal, and the courts or their superiors  agree with the populace? How often does a court come out and actually say a policeman’s actions are illegal? Sure it happens, but not very often.

So why the outrage from police? Alot of them are crying out “You do not resist a police officer. Just do what we say and everything will be fine” Which asks the question, who is really the master and who is really the servant? If we can get in serious trouble for resisting demands from servants, are they really servants, are they really working for us?

We all know that if someone breaks into your home and brandishes a weapon you will not be tried for murder if you shoot back. But if it is a cop entering your home, whether they are doing it legally or not, why are they worried about resistance?

The Indiana Supreme Court said you have no right to resist, a ruling brought forth because a Evansville man told a cop he could not enter his house when he responded to a domestic dispute call and pushed the officer away from his door.

Even though I only believe this bill is nothing more than posturing and will not cause a huge upswing in murders of police officers, like the cops are claiming will happen, take a look at past judges ruling on the right to resist unlawful arrest and remember police officers have sworn to uphold the law (although we know it’s a joke)

“Citizens may resist unlawful arrest to the point of taking an arresting officer’s life if necessary.” Plummer v. State, 136 Ind. 306. This premise was upheld by the Supreme Court of the United States in the case: John Bad Elk v. U.S., 177 U.S. 529. The Court stated: “Where the officer is killed in the course of the disorder which naturally accompanies an attempted arrest that is resisted, the law looks with very different eyes upon the transaction, when the officer had the right to make the arrest, from what it does if the officer had no right. What may be murder in the first case might be nothing more than manslaughter in the other, or the facts might show that no offense had been committed.”

“When a person, being without fault, is in a place where he has a right to be, is violently assaulted, he may, without retreating, repel by force, and if, in the reasonable exercise of his right of self defense, his assailant is killed, he is justified.” Runyan v. State, 57 Ind. 80; Miller v. State, 74 Ind. 1.

“These principles apply as well to an officer attempting to make an arrest, who abuses his authority and transcends the bounds thereof by the use of unnecessary force and violence, as they do to a private individual who unlawfully uses such force and violence.” Jones v. State, 26 Tex. App. I; Beaverts v. State, 4 Tex. App. 1 75; Skidmore v. State, 43 Tex. 93, 903.

“An illegal arrest is an assault and battery. The person so attempted to be restrained of his liberty has the same right to use force in defending himself as he would in repelling any other assault and battery.” (State v. Robinson, 145 ME. 77, 72 ATL. 260).

“One may come to the aid of another being unlawfully arrested, just as he may where one is being assaulted, molested, raped or kidnapped. Thus it is not an offense to liberate one from the unlawful custody of an officer, even though he may have submitted to such custody, without resistance.” (Adams v. State, 121 Ga. 16, 48 S.E. 910).

“Story affirmed the right of self-defense by persons held illegally. In his own writings, he had admitted that ‘a situation could arise in which the checks-and-balances principle ceased to work and the various branches of government concurred in a gross usurpation.’ There would be no usual remedy by changing the law or passing an amendment to the Constitution, should the oppressed party be a minority. Story concluded, ‘If there be any remedy at all … it is a remedy never provided for by human institutions.’ That was the ‘ultimate right of all human beings in extreme cases to resist oppression, and to apply force against ruinous injustice.’” (From Mutiny on the Amistad by Howard Jones, Oxford University Press, 1987, an account of the reading of the decision in the case by Justice Joseph Story of the Supreme Court.

The bill will now go back before the Indiana Senate in an attempt to have both chambers agree on the same bill. While we wait, remember to keep your head up, remain peaceful, and for gods sake…..