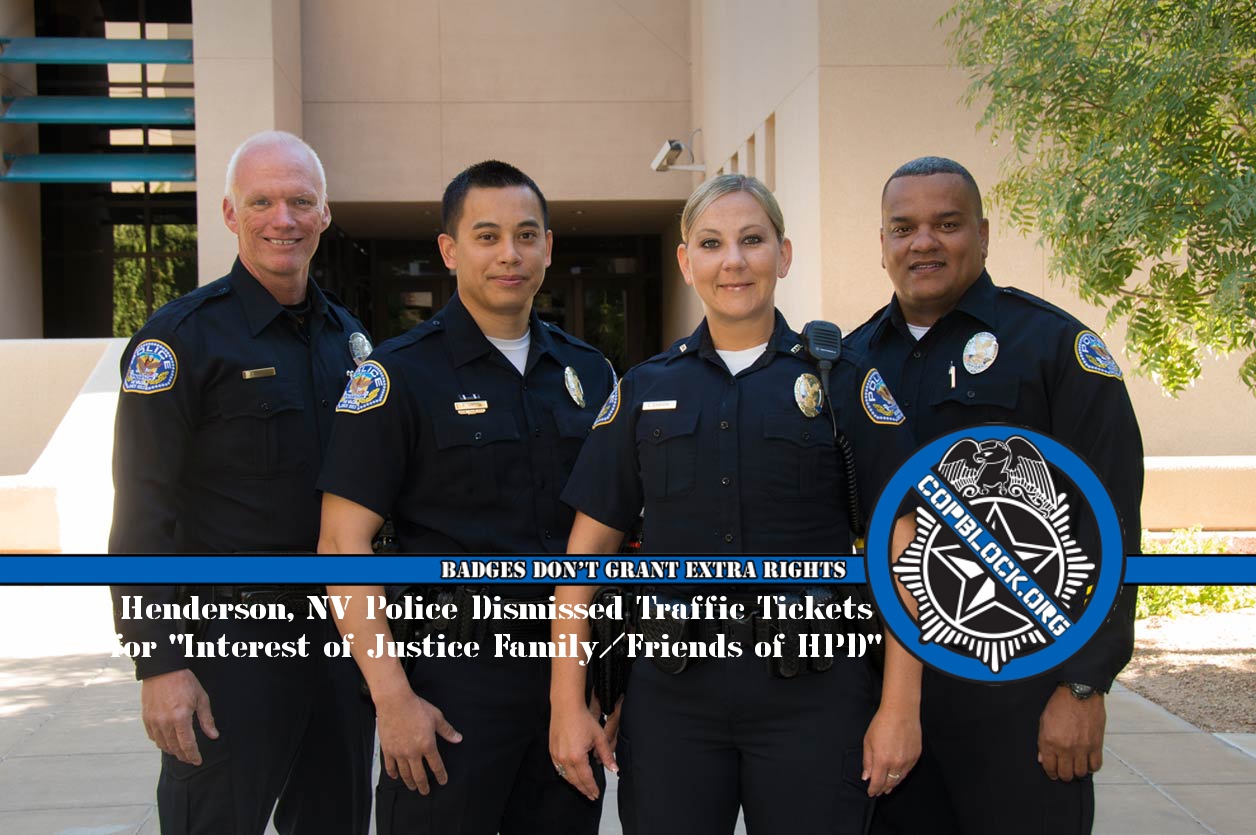 A recent audit revealed that as many as 96 traffic citations were dismissed improperly in Henderson NV, a suburb of Las Vegas, after having been filed with the court system. In a bit of Orwellian phraseology, one of the reasons given for those dismissals was listed as “Interest of Justice Family/Friends of HPD.”

In March, police spokeswoman Michelle French called that reason “not acceptable under our policy.”

But Police Chief Patrick Moers’ five-page response to the audit never mentions the “family/friends” case and makes no attempt to explain it. Moers did not return a call for comment Monday.

The officer who filled out that form — and two supervisors who signed off on it — are still on the force. Their ranks and assignments have not changed, city spokeswoman Kathleen Richards said Monday.

An Internal Affairs Bureau investigation into the issue started March 25 and ended May 21, but Richards said she could not discuss its findings or whether any officers had been disciplined because it involved personnel matters.

City Manager Robert Murnane, who took office last week, was not involved with the audit. But he said audits — and responses to them — generally focus on what needs to be changed to prevent future problems, rather than on why an employee might have done something wrong…

Under state law, only a judge can throw out a ticket once it’s been filed in court, but the city auditor said officers routinely had citations dismissed by filling out an internal form and filing it with Henderson Municipal Court staff. The citations were then dismissed by court staff without a hearing before a judge…

Officers are allowed to ask that a ticket be voided for legitimate reasons, such as an error made in writing the citation or a speeding driver proving he was on his way to a family emergency.

That’s sort of a fancy (and unconvincing) way of saying, “we promise not to do all that illegal stuff again, but we’re not going to bother to hold anyone accountable for it.” Of course, Henderson is the city where police officers got away completely unpunished for beating a motorist that was having a diabetic seizure, because according to District Attorney Steve Wolfson, they are trained in the academy to kick people in the head while arresting them. So, this intentional lack of accountability should not come as any more of a surprise than it would with the rest of the police departments throughout the Las Vegas area.