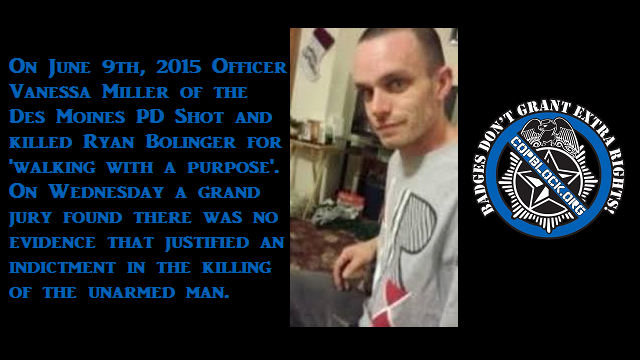 Months after officer Vanessa Miller shot and killed Ryan Bolinger for “walking with a purpose” on a busy Des Moines, Iowa street, a grand jury not only found the officer innocent of any wrongdoing, but said that there was no evidence to indicate any wrongdoing had even occurred.

Ryan Bolinger stopped his car next to the squad car of Ian Lawler, who was on an unrelated traffic stop, and got out to start dancing. Bolinger’s car was so close to Lawler’s that the officer couldn’t get out of the car. After a short while Bolinger got back into his car and proceeded to drive away. That’s when Lawler abandoned his traffic stop and started to follow him. At some point Vanessa Miller, also of the Des Moines Police Department, joined the low speed “chase.”

When Bolinger went to make a U-turn at an intersection he was boxed in by Lawer from the front and Miller took a position at the rear of his car. That’s when Bolinger once again got out of his car and started walking towards Miller who was inside her cruiser at the time. Bolinger had nothing in his hands, no weapons on his person and was merely walking towards Miller’s cruiser when she shot him through her rolled up window. He later died at the local hospital, leaving a fiancée  and unborn child.

The grand jury deliberation began on Monday August 24, 2015 and a decision was reached only three days later. Now the Des Moines Police Department will run their own internal investigation to determine any wrong doing.

Chief Dana Wingert says that people should trust the process, even if they do not like the outcome. He referenced Iowa Law, which ‘looks at how a reasonable person might handle the situation.’

“We’re still human beings with emotions, fears, reactions — all of us, just like you.”

Elsewhere he went on record as saying:

“This is a horrible situation for everybody involved. We`ll take that internal process and review our policy our tactics our training and best practices and see what we can learn from this and implement some measures that will make our officers more effective and safer as they go about their business.”

The fact that Wingert thinks that his murderous officer and his department are just as much victims as Ryan and his family leaves very little hope that his department will be doing the right thing and convicting the killer on his force. No citizen would ever get away with killing because they were ‘only human’. Police are to be held to a higher standard and to the law. That is not happening.

The situation is not equally horrible for all involved. It is far, far worse for the dead man and his family. That on multiple occasions the chief has tried to equate the hardships of murderer and murdered indicates not only that he does not understand the wrongdoing, but that he has little in the way of his humanity left. You simply do not publicly announce that a murderers burden is as great as the murdered and those left behind. That is some sick and twisted stuff, right there.

After the charade of an internal investigation is complete, Ryan’s family will be able to file a civil lawsuit against the DSMPD in his death. However, this will only be to receive monetary recompense in lieu of damages, and will not serve to bring Ryan’s killer to justice.

Miller is on paid vacation while the investigation, conducted by the department as well as the Iowa Division of Criminal Investigation, is underway.

CopBlock members gathered with local residents back in June to stage a protest in the killing. You can view the the response from CopBlock HERE and from the local media HERE.

In recent weeks two other shootings by Iowa police have been (at least temporarily) cleared of any wrong doing by various agencies.

Autumn Steele was killed by an officer trying to shoot her dog this past January. The Iowa Public Information Board has decided once again not to release any investigative materials in the shooting, and no accountability has been had thus far in that meaningless and tragic death.

[CORRECTION: The IPIB director wished to dismiss the request, but that was overturned by other members who will be making a decision sometime in September.]

Another shooting earlier this year, that of Javon Webb of Waterloo, was recently found to be justified, despite the fact that little has been released in the way of evidence to corroborate the police claims.

Although often thought to be a sleepy little farmland without much in the way of the ills of the world around it, Iowa has had it’s fair share of police issues. There are currently three pending cases of police brutality in Dubuque, Iowa alone, amongst the many more around the rest of the state. Earlier this year the Des Moines Register had an in-depth look at the outright theft that Iowa officers participate in under the guise of Civil Asset Forfeiture. Most recently CopBlock.org reported on the case of a Sheriff who stole a man’s legal weapon carry permit.

So while the nationwide perception of Iowa as some sort of land of innocence remains, Iowa police are battling that by proving that they are every bit as shady and untrustable as cops everywhere else. The case of Ryan Bolinger was a potential turning point, a chance to set a positive example for the nation on how to deal with cases of out-of-control cops. In this, so far, we have failed. Thanks to the Iowa Grand Jury who refused to do the right thing, I am more ashamed now than I ever have been to be an Iowan.