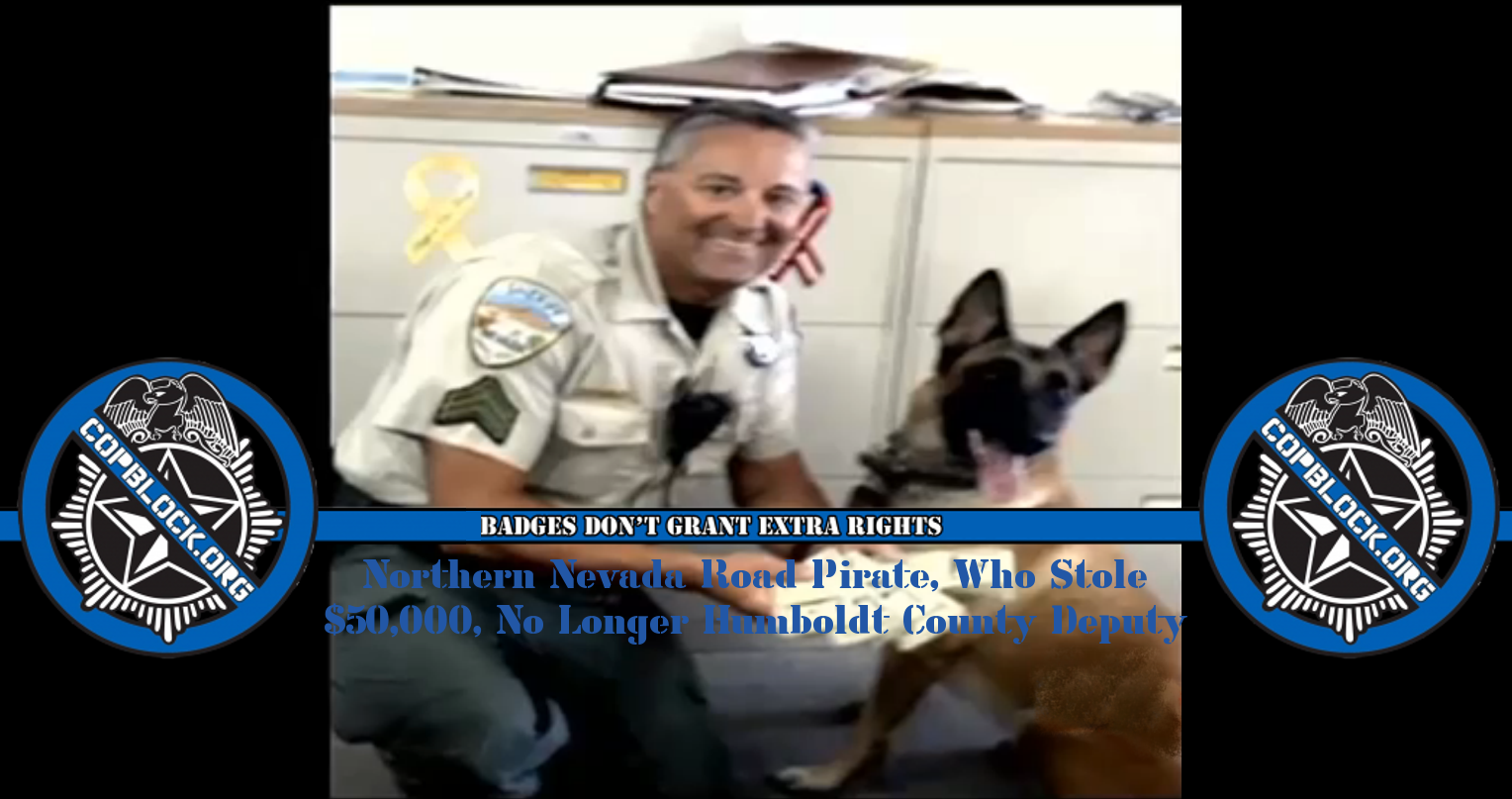 “An armed person stops a traveler and demands the traveler’s money and tells the traveler that unless he gets in his car and moves on down the road and forgets all about it, he’s going to take his car too. I would say that’s pretty close to what you’re describing as highway robbery.”

Last week, it was announced that Deputy Lee Dove, who gained a bit of infamy after a dash cam video of him pressuring a man driving through Northern Nevada into giving up $50,000 in cash that he won gambling in Las Vegas, is no longer employed by the Humboldt County Sherriff’s Department. It wasn’t disclosed whether he was fired or allowed to resign, nor whether his departure was related to the seizures.

In addition to the controversy that video caused toward the HCSD’s policy of shaking down drivers along I-80, two weeks ago Former Deputy Dove also pled guilty to a lesser charge as part of a plea deal in a criminal case, in which he threatened a customer at a convenience store with his gun.

The commentary from that dash cam video is pretty blatantly a case of outright robbery: “How much money you got?” Humboldt County Deputy Lee Dove can be heard asking on the video.

Dove can be seen dropping cash on the hood of the car.

The dash-cam video gives insight into what some say is a pattern of questionable drug interdiction stops by Deputy Dove along I-80 near Winnemucca in northern Nevada.

The first issue is whether Dove obtained permission to search the car or whether he simply told the driver, Tan Nguyen, he was going to do it.

Deputy Dove: “Well, I’m gonna search that vehicle first, ok?”
Nguyen: “Hey, what’s the reason you’re searching my car?”
Deputy Dove: “Because I’m talking to you … well, no, I don’t have to explain that to you. I’m not going to explain that to you, but I am gonna put my drug dog on that (pointing to money). If my dog alerts, I’m seizing the money. You can try to get it back but you’re not.”
Nguyen: (inaudible) got it in Vegas.”
Deputy Dove: “Good luck proving it. Good luck proving it. You’ll burn it up in attorney fees before we give it back to you.”

But Dove never seizes the money under state forfeiture law, instead he offers Nguyen a deal. Abandon the cash and you can leave with the cashiers checks. Otherwise, Dove will confiscate the cash anyway and tow the car because Nguyen’s name isn’t on the rental agreement.

Deputy Dove: “It’s your call. If you want to walk away, you can take the cashiers checks, the car and everything and you can bolt and you’re on your way. But you’re gonna be walking away from this money and abandoning it.

Tan Nguyen, the motorist being robbed in the video, was able to regain his money, plus $10,000 in lawyer’s fees, in a lawsuit. However Deputy Dove and the other Humboldt County Road Pirates were able to steal cash from many other drivers’ before their revenue generation scheme was finally exposed.