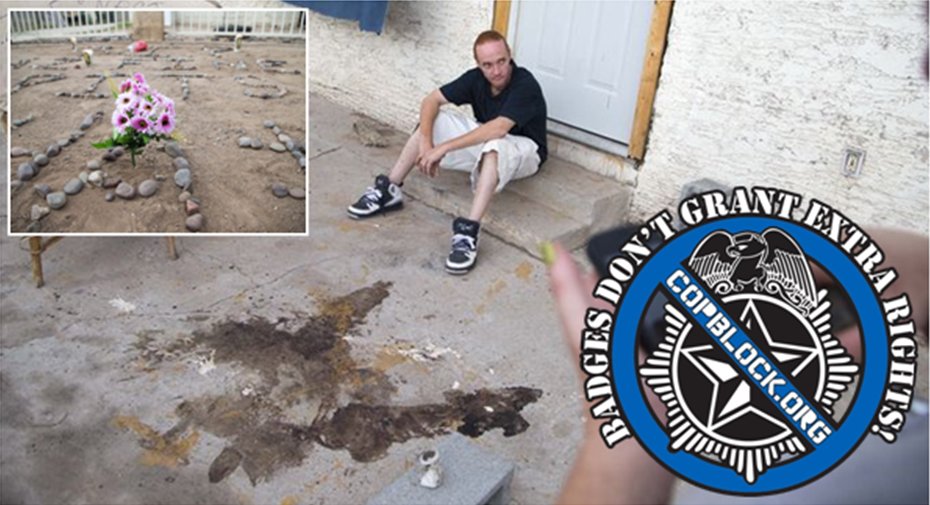 An Arizona man says he returned home after a neighbor called to tell him they heard gunshots to find that Phoenix police officers had shot and killed his two dogs.

Eric Morgan said he arrived at his home near 10th Avenue and Buckeye Road on Wednesday, where he found two blood stains at different areas of the property and was told his 5-year-old and 2-year-old pit-bulls were dead.

Phoenix Sgt. Vince Lewis said officers were serving two search warrants for two different occupants of the home, one for drugs and another for a DUI , when the two dogs charged at one officer after police opened the front gate to the property.

Three different cops fired their weapons at the dogs, Lewis said, and one officer was bitten on the leg.

The police story seems to be inconsistent, however, as Morgan claims the blood stains he found on the property were in two different locations:  one in the driveway and one in the back yard.

Police reports appear to claim that both animals were shot while charging in the front of the home.

“I just broke down,” Morgan said. “Nobody was here, no paperwork…I was like, surely somebody’s going to contact me [but they didn’t].”

The man said it was unclear what he should do next and that police offered him no help as to where he could find the bodies of his dead animals.

Morgan says he had a friend call the department, which told him to call the Arizona Humane Society, but when Morgan called the Humane Society they redirected him back to the police.

Then, Morgan said, he was given the number of a sergeant by someone at the department, who then gave him the number of a different sergeant, who he was told not to contact as the officer would contact him by Friday.

Morgan spent the next several hours searching for the animals with no success and then built a memorial to his pets in his front yard that read, “RIP AZ FINEST PITS – SASHA & CHARLIE.”

Morgan says he doesn’t want to blame the officers or “give in to rumors”; he just wants the opportunity to give his dogs a proper burial.

Sgt. Lewis says it isn’t the first time the dogs had caused a problem in the neighborhood but said, “Obviously it’s not a pleasant situation when [officers] have to dispatch an animal when it’s someone else’s property.”

“It’s a situation when an officer will react to a threat, or that of a partner or community,” Lewis said. “The force will be used to stop the attack.”

It is unclear if officers ever contacted Morgan about where the bodies of his animals could be found.