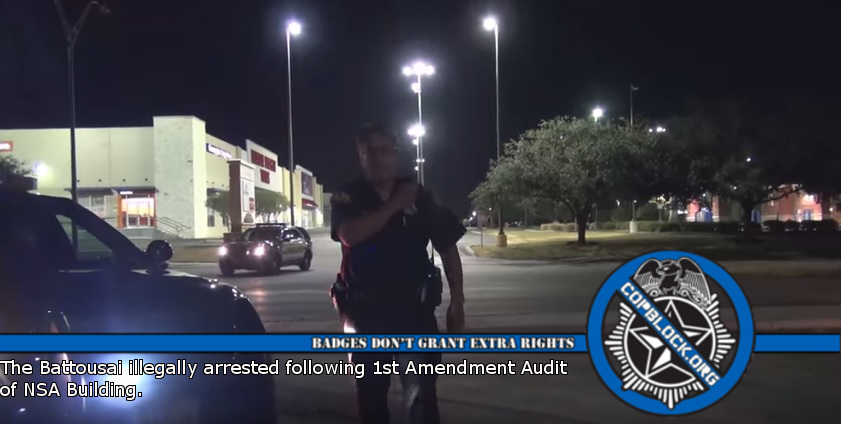 On August 24, 2015, The Battousai was doing a First Amendment Audit at the NSA building in San Antonio Texas as a followup for a video he shot on February of this year in which he was harassed by San Antonio Police for taking a picture of the building.  During the entire interaction, he remains calm, professional, and respectful when interacting with the officer.

The Battousai gave me a break down of what took place via an e-mail that he sent me.

I appreciate you writing articles on my encounters. I took some video of the NSA building as a follow-up to Carlos being detained for filming. In the first video I told them my intentions and they ask for ID. I declined and kept filming, it starting getting dark so I decided to leave and noticed I was being followed despite not breaking any laws.  I crossed the street because I was nervous about them tailing me. t know the law word for word, but I was familiar with it. I still refused to ID and was arrested. When I was handcuffed in the back of the patrol car of J Morgan I noticed a phone number next the letters NSA: 210-830- but I didn’t catch the last four.

I was taken to the Magistrate Services Center, where I was fingerprinted, photographed, and placed in a holding cell for an hour. I was released with no charges and was told that there were problems with the detainment, and the transporting officer drove me back to my car near the location I was arrested.

The next two days I called to look into my information that was taken (fingerprints and photo). I was told they had no record of me being there, even though I have a document stating so. I’m wondering if SAPD gave my information to the NSA after the incident and I also put in public records requests for all information that happened that night. I’m currently raising funds on my go fund me and looking into suing for violation of civil liberties.

According to Texas State Statute on Jaywalking:

Sec. 552.005.  CROSSING AT POINT OTHER THAN CROSSWALK.  (a)  A pedestrian shall yield the right-of-way to a vehicle on the highway if crossing a roadway at a place: (1)  other than in a marked cross walk or in an unmarked cross walk at an intersection.

Sec. 541.302.  TRAFFIC AREAS.  In this subtitle: (5)  “Highway or street” means the width between the boundary lines of a publicly maintained way any part of which is open to the public for vehicular travel.

(a) A person commits an offense if he intentionally refuses to give his name, residence address, or date of birth to a peace officer who has lawfully arrested the person and requested the information.

(b) A person commits an offense if he intentionally gives a false or fictitious name, residence address, or date of birth to a peace officer who has:

(2) lawfully detained the person; or

(3) requested the information from a person that the peace officer has good cause to believe is a witness to a criminal offense.

(c) Except as provided by Subsections (d) and (e), an offense under this section is:

(1) a Class C misdemeanor if the offense is committed under Subsection (a); or

(2) a Class B misdemeanor if the offense is committed under Subsection (b).

(d) If it is shown on the trial of an offense under this section that the defendant was a fugitive from justice at the time of the offense, the offense is:

(1) a Class B misdemeanor if the offense is committed under Subsection (a); or

(2) a Class A misdemeanor if the offense is committed under Subsection (b).

In another video, he describes how was then taken downtown to the station where he was fingerprinted and booked in and then placed in holding for a few hours.  He was later released with charges dropped after the DA said that there were problems with the detainment.  Basically, he broke no law and was illegally detained.  After the release, the officers actually drove him back to his car.  I think that was a nice gesture considering they violated his rights with the illegal arrest.  At least these officers did one correct thing during Battousai’s ordeal.

The Battousai has stated that he is filing a law suit regarding this arrest and has created a GoFundMe account to raise money for his legal expenses for this case.  He has also asked for a call flood to the West San Antonio Police Department for his illegal arrest.  Please consider taking part in the call flood beginning first thing in the morning on August 31.  The phone number for the West SAPD is 210-207-7420.  Please keep the calls calm and professional.  Cursing and threats will do nothing to effect change and will only cause harm to our cause.

The way that Battousai conducted himself throughout all of this is how I believe one to behave during a police encounter.  His calm demeanor is what I believe kept things from escalating to violence.  Batt is a true professional in how he deals with these officers.  Below are the videos from the 1st Amendment Audit of the NSA Building.