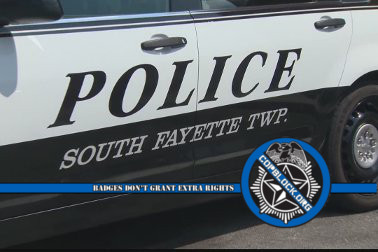 An Allegheny County police officer is currently on administrative leave following an incident that took place on August 12, 2015.  Officer Keith Shepherd, a 24 year veteran of the police force was cited with 2 counts of simple assault.  The victims have not been identified at this time.

According the criminal complaint filed by the South Fayette Township Police, Shepherd was riding motorcycles with friends and stopped at a local bar for drinks.  As he was leaving the bar, the unidentified victim drove by and said, “Nice bike.”

The victim then noticed the motorcycle following him as he made his way home.  Once he pulled into the driveway of his home, Shepherd approached him and an argument ensued.  The argument soon escalated to violence when Shepherd struck the victim in the head with his motorcycle helmet, knocking him to the ground.  The victim’s brother came out of the house to intervene when he too was struck and bitten by the officer.

Officer Shepherd was off duty when this took place and was armed during the fight.  The victim’s brother took the officer’s gun from his holster and fired a shot into the air, yelling, “stop, I will protect myself.” stop at a stop sign.  Remember, this officer was not on duty and had been drinking.

Shepherd was not arrested at the scene, but charges were filed the following Monday after consulting with the District Attorney.

Something tells me that a lot more about this story will come out as the investigation continues.  Why this officer was not arrested at the scene and charged with aggravated assault is beyond me.  He used his helmet as a weapon in the assault.  Why was the officer not investigated for DUI since it had been determined that he had just left a bar prior to this assault?

This incident is another clear example of how out of control police officers really are and how they think their position entitles them to behave like thugs even when off duty.  In my opinion, the officer is lucky to be alive as Pennsylvania has a stand your ground law and the victim has no duty to retreat and is lawfully permitted to use deadly force.  The officer clearly demonstrated intent to inflict serious bodily injury by using his helmet as a blunt object to strike the victim.

These types of egregious acts perpetrated by police officers does nothing but continue to grow the hate and distrust that so many citizens feel towards them.  The fact that he has only been charged with simple assault; which is a misdemeanor, further demonstrates that these officers are not held to the same laws as regular citizens.  Until there are changes in the way that the law is applied to these officers, the hate and distrust will only grow.

This story will be updated as more information becomes available.