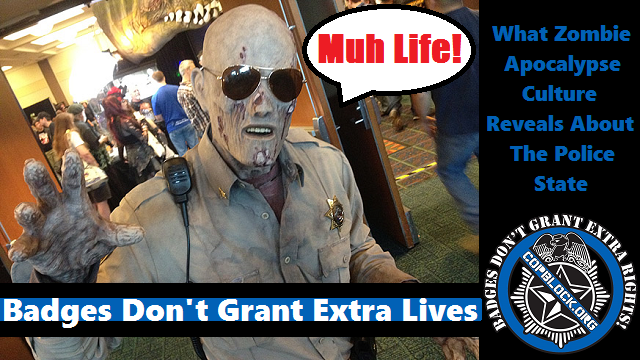 The other day I was watching episode seven from the fifth season of The Walking Dead when I saw the most police thing ever. There is a scene in which the shows protagonist, Rick, a former sheriff’s deputy, kills Officer Lamson of the Atlanta PD, who had managed to survive up until now with a group of fellow officers. In the scene Rick mercilessly kills Lamson, first by running him over when he fails to comply with orders to stop running, and ultimately shooting him after showing him impatience, disrespect and disgust. And if you are a fan of the show you know that Rick is the good guy and that he was just doing what he had to do.

The entire zombiverse, a cultural phenomenon that spans film, comics, literature, music, art, video games and more, is essentially based around an individual or group of survivors who use cop logic as their primary method of dealing with all situations. The characters in the zombiverse are almost always foremost concerned with their own survival at the expense of ethical, moral and rational considerations. The mantra of those enduring the zombie apocalypse is: “Whatever it takes to survive.”

Police are much the same way. Their first and foremost duty seems to be self-preservation, regardless of the cost. This is a strange raison d’être for a profession that claims to be all about sacrifice. The willingness to sacrifice your life is not at all a sacrifice if your first order of business is to survive at all costs. Those who are truly willing to sacrifice their lives put many things before the preservation of self, including their beliefs, values and morals and the safety and survival of those around them. You cannot have it both ways. Yet it is clear that police almost always put their own safety and well-being before others or before any primary altruistic ideology.

I have known a number of current and former officers who really enjoy zombie apocalypse culture and media. Many of them are also, to some degree, survivalists or preppers. The entirety of cop culture is imbued with the ideology of survival. It is saturated with the US vs. THEM mindset. When your only goal is to persevere amongst the living, it makes a lot of sense to divide everything into either ‘threat’ or ‘like me’. The fraternal nature of cops stems from the fact that they see themselves as ‘us’ or ‘like me’ and everyone else as, at least potentially, ‘them’ or ‘threat’. And while the sort of black and white oversimplification of complexly interconnected human relationshsips works well in zombie stories and keeping police alive, it does little for fostering the purpose of the police; which is to keep US safe first and foremost, not themselves.

In the zombiverse you get to kill and destroy without remorse. When you become bored and jaded you can find novel ways of doing it. And you can eventually even enjoy the killing. You might as well since you have to do it in order to survive. One gets the feelings this is not so different from the perspective of many cops, who have seemed to relish and delight in the misery rained upon others in the name of their own survival. The zombie apocalypse is sort of a dream come true for police psychologies. It is a playground of wanton destruction in the name of survival.

“I feared for my life.” Whether it is cops or characters in a zombie movie, book, etc., this is the ultimate reasoning given to validate and justify what human beings would otherwise find inexcusable, immoral and even unlawful. It is frightening that those in charge of ‘protecting’ us have the same philosophical outlook as those characters inhabiting a land where the dead do not die and are a constant threat.

The next time you consume your favorite zombie entertainment franchise, see if you cannot draw some similar parallels between those worlds and the philosophies and actions of police. The analogies, metaphors, allegorical reference and sometimes straight out lampooning of police and authoritarian values they contain is frightening. While the zombie apocalypse itself is frightening enough, the fact that we live in a world where there are psychological deviants in charge who already view and treat us like the non-living is even more frightening.

I always loved zombie stuff, since I saw Night of the Living Dead as a kid. I have consumed numerous tales through a variety of mediums with insatiable delight. And as such I spent a long time as one of those arrogant and deluded people that believed they could now survive a zombie apocalypse. Eventually, however, I decided that if such a fantastic mythical world were to come into being, I would not want to survive within it.

There is more to existence than survival. The choices we make along the way, the values that we hold consistently, the sacrifices we are willing to make for a better world- these are all important things. The zombiverse would necessitate all sorts of horrible decisions that would not be considered proper otherwise. That is not a world holding on for survival. That is a world being pulled apart first physically and then ideologically. There is no future in a society in which survival is the only meaningful consideration. No sane person would ever live a life in which only survival mattered. That the police also inhabit a reality in which only self-preservation matters says a lot about that institution. It is not an institution based on the value of life, but rather, fear of the inevitable. Death comes to us all. Those who spend their entire lives and dedicate their worldviews to deluding themselves of their own mortality are not psychologically healthy. The crippling fear of death which leads to a belief in survival at any cost is a deviant apparatus of human existence. And somehow, along the way, it got itself put in charge.

In the real world the threat is not death or the dead, but those who refuse to face that eventuality, and will do anything to prolong it. Forget about zombies, cops are already inhuman monsters.

Hours after writing this I came across THIS ARTICLE which theorizes that the new spinoff television series, Fear the Walking Dead, may be attempting to make police critics look foolish. Not my theory, but it is interesting that two completely disconnected writers wrote a piece wondering how Copsuck zombiephilia has become.