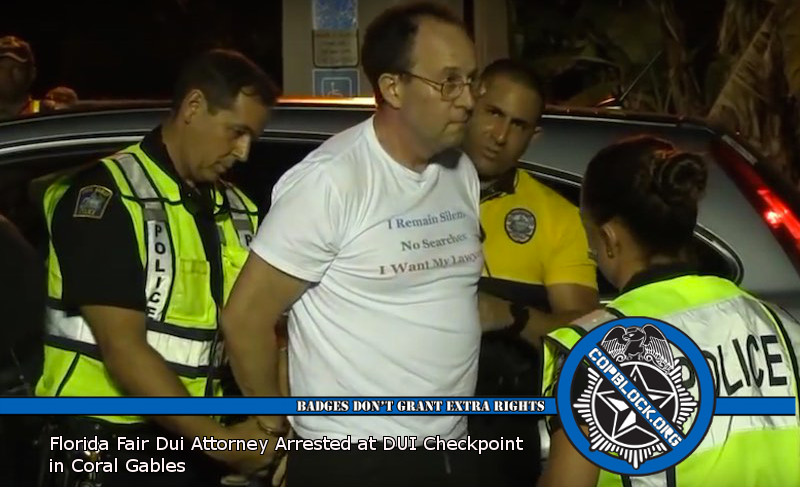 Many of you may be familiar with Attorney Warren Redlich out of Florida from the Fair DUI flyer that he came up with to hold up to your window when going through a DUI Checkpoint earlier this year.  The story on the use of this flyer went viral and was even picked up by main stream media across the country.

Attorney Redlich is a criminal defense attorney as well as a civil rights activist.  He published a book in 2013 titled, “Fair DUI.”  Shortly after the book was released, he was getting questions from a lot of people about how to handle checkpoints and how to protect their rights.  This is when he came up with the Fair DUI Flyer. He then put the flyer to the test in a video he uploaded earlier in the year that has over 100,000 views on YouTube.  Several Sheriffs in the state of Florida began publishing threats of arrest should he attempt to use the flyer in their jurisdiction.  The issue these officer seem to have with the flyer is that those using it have been keeping their windows rolled all the way up when going through the checkpoints and holding their driver’s license up to the window instead of handing it to the officer.  Florida has no law that states that you have to physically hand the license to an officer when requested, rather you only have to show it to them.

Other activists have been using the flyer for checkpoints and the videos produced from these encounters have resulted in YouTube videos receiving views in the millions.  One video even received over 3.2 million views alone.

According to Attorney Redlich in an article he published concerning his recent arrest, he states:

One key feature of my approach is that you do not roll down your window. Florida law requires you to “exhibit” (or show) your license to police. It does not require you to hand it over. I recommend people keep the window closed and press the license up against the window. Some prosecutors and police legal advisors decided to fudge that law (§322.15 of the Florida Statutes) and claim that you are required to hand it over. The Coral Gables legal advisor, attorney Israel Reyes, went further and recommended that anyone who refuses to physically hand over their license be arrested for a misdemeanor – resisting without violence. The City Attorney adopted this recommendation and it became formal policy.

The policy can be viewed by clicking on the link to his article above.

The policy ignored the fact that the violation of 322.15 was a noncriminal offense and was not an arrestable offense.  In fact, it is a noncriminal infraction punishable as a “non-moving violation.”

Redlich was informed of a checkpoint taking place in Coral Springs and decided to see how things would play out with the policy that they decided to enact.  You can see how the scene played out in the video at the top of the story.

Three hours after his arrest, Redlich was un-arrested and issued a citation for violation of 322.15.  Coral Gables is now in the cross hairs for a lawsuit in federal court.  Redlich says that the lawsuit is not about the money, but instead, “The goal is to get a federal judge to make sure that police follow the law, including 322.15 as well as Supreme Court cases on checkpoints.”