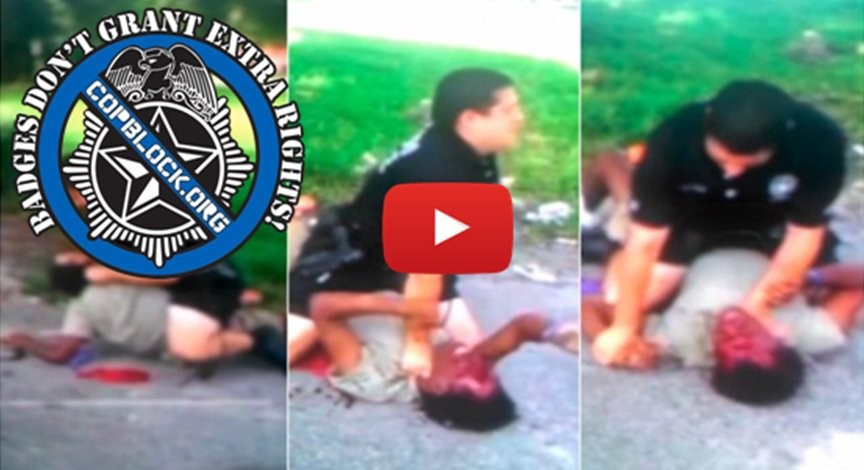 Video has surfaced showing an Orlando cop beating a homeless man bloody as he tries to defend himself in a vacant lot near the corner of Ossie Street and Parramore Avenue on Wednesday.

The footage shows 44-year-old Terre Johnson mounted by officer James Wilson who pins him to the ground, grabs his head and grinds it into the pavement as the man attempts to ward off the cop.

Bystanders who can be heard on the video protesting the officers actions say the attack was completely unprovoked and that Wilson started the fight.

“[Wilson] and Terre [we]re standing on the edge of the road, face-to-face, talking and arguing, one witness said. “[Then] all of a sudden, [the officer] just grab[bed] Terre and slammed him into the ground.”

“Then he pulled out the Taser and pointed it at him like he was going to taze him and put it back in. That’s when [Wilson] grabbed [Johnson] and slammed him to the ground and started hitting him.”

Orlando police maintain that Wilson was completely in the right and that it was Johnson who initiated the attack by swinging at the officer, and added that a statement from one witness supports that account.

“All you are seeing is one small piece of an incident, and that is it,” Sgt. Wanda Ford said, and added that Wilson was wearing a body camera she claims will clear him of any wrongdoing.

“This is one of those instances, where the suspect was aggressive,” said Ford. “He’s known to be aggressive. He’s been arrested before for battery and for resisting against an officer.”

Still yet, an additional witness – Austin Mells – has came forward and confirmed other testimonies from the scene that Wilson pulled out his taser before grabbing the man and taking him to the ground.

“When they fell to the ground, the officer got on top of the man, so Terre hit the officer,” Mells said. “Then the officer grabbed him by the hair and started hitting him like this.”

An internal review of the incident has been launched by Orlando police and Sgt. Ford says the full body-cam footage will be released after the investigation is completed.

Johnson is being held in the Orange County jail on $10,300 bond.