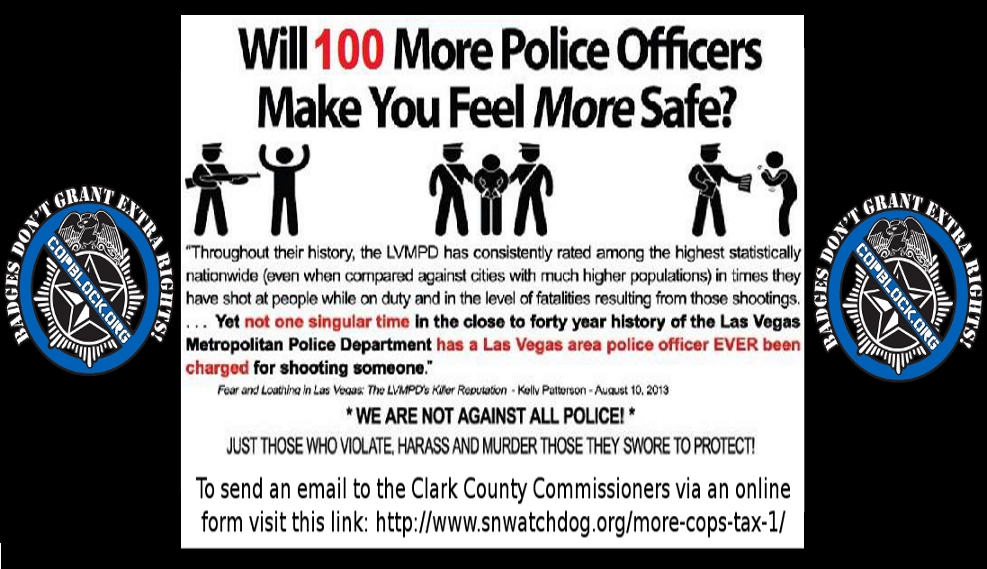 Last year, former Clark County Sheriff Doug Gillespie’s continuous attempts at a “More Cops Tax” failed to pass in the County Commission, after dozens upon dozens of citizens commented in person against the proposed tax hike, and hundreds of signatures against it were submitted to the commission. Shortly after, Gillespie announced his decision to not run for re-election, and recently, the big pusher on the commission during the last attempt, Tom Collins, resigned. Even current Sheriff Joe Lombardo and the Police Protective Union were against the More Cops Tax. Well, now it’s back, as a proposal to increase the county sales tax rate by .05 percent.

In case you haven’t been keeping up with the local scale of the police brutality issue, we are not spared and have still not seen ONE Metro cop arrested or jailed for any murder, no more than one ever fired. Just a couple weeks ago, this hit really close to home for me when a friend of a friend, Abel Correa, was killed by Metro police, apparently for holding a screwdriver a few feet away from them in a closet he was cornered in. The body cam footage shows how their statement that he “lunged at them” was another exaggeration and surely their latest tally in forever getting away with murder. Another man was killed just this weekend.

We have not seen some drastic rise in crime and even though Sheriff Gillespie last year took the dramatic reactionary gesture of stopping police from responding to fender-benders, they still show up in 4s and 6s to detain pedestrians and arrest people for traffic violations. And of course, no need to even mention the overt intimidation tactics used by Metro on opponents of the tax as a whole following last year’s commission battle… but you can look back through my 2014 blog if you’d like a taste.

There are many reasons to oppose the tax, and following are some clips of last year’s dissenting comments, then recent quotes from people opposing the new incarnation as well. You can submit your comments using this form if you can’t make it to the public hearing tomorrow, Tuesday September 1st, 2015, in the Commission Chambers the Clark County Government Center (500 S. Grand Central Parkway) at 10am. Let’s make it another filled-room record number turnout!

Reasons people are against the current More Cops Tax:

“Because my household is taxed 39% of our income, then we are taxed on sales, then taxed when we leave money to our children! That’s triple taxation and under our constitution, there’s to be no double taxation! Thirdly, we have enough law enforcement in this city.” -Rachel Kline

“The People have not been shown a forensic audit that was requested as far back as 2013. We need to be able to assess if there have been any significant changes made to reel in this huge budget that has had much waste in the past. The liability insurance alone has gone up so high, so we need to see if there has been any special training implemented to change that direction. The forensic audit would help Sheriff Lombardo as well as he also could see where the weak areas are. The forensic audit is a win, win.” -Liberty Shirl

“Las Vegas has a higher per capita ratio of cops to citizens than Chicago or LA. We have enough cops. Their time is being grossly mismanaged. Money is being wasted at an alarming rate. Metro has an undercover fleet that would make NY jealous and is unnecessary. SWAT units that could be its own army. It’s insane. The spending is out of control. We don’t need more cops or more taxes. We need responsible representatives, not millionaire cops and legislators.

(Also) how much money is spent on payouts against metro for unlawful actions….and administrative leave pay. That needs to end before more tax money is taken from citizens.” -Karen Steelmon

“More $ for police means they will continue the militarization against private citizens, with military assault vehicles, weapons, and attitudes. The people are not the enemy. Fix the system that allows discriminatory practices, like Driving While Black, Shoot to Kill, MMJ patients are Criminals.” -Diane Kuroda

Las Vegas is ranked 29th in in the nation for city size and population, but has a police force ranked 7th largest in the entire country! Our police force is ranked #1 for highest paid police force in the United States. We should not have one of the largest police forces, with the highest pay in the entire United States with a population of tax payers not even making the top ten! It’s greed. It’s misappropriation of funds. It’s malfeasance! It’s falsely thinking the job of a police officer is more important than the job of a teacher! With our school system ranking 50th in the Nation, our administration has the gall to ask AGAIN for an increase of pay for police, but ignores the obvious shortfall in education. We are sick of it!

Every police officer hired is directly responsible for lacking one teacher. That’s big because we have a severe lack of teachers and education funding.

They are over paid, underworked, overly aggressive and over privileged! I urge our elected officials to stand with the people who elected them and vote no again on the New Cops Tax until education is fixed!” -Becca Martin

“But this scaled-back, countywide sales tax increase to boost police budgets isn’t worthy of approval because it has the same flaw as its predecessors: It burdens taxpayers to bail out fiscally unsustainable local governments that have no interest in making hard decisions and prioritizing their spending.

… We already have the best-paid local government workforce in America (including Metro officers), and that comes at a cost. And don’t get us started on the city of Henderson, which just increased recreation fees, provided its police with a 2.5 percent raise that will cost about $1.2 million per year going forward and has too many institutional problems to list here. Henderson doesn’t need more police or more tax money, yet it’s about to get both.

Police funding is not a crisis in Southern Nevada. The money is there. The More Cops tax means more of the same for every local government in the county. We can’t afford that.”

The new tax hike is just as needless as it was in 2013-14, so here is a compilation of links and videos prepared for last year’s fight as well:

Here was a compilation of police brutality prepared just before the last tax hike attempt and another created this year: