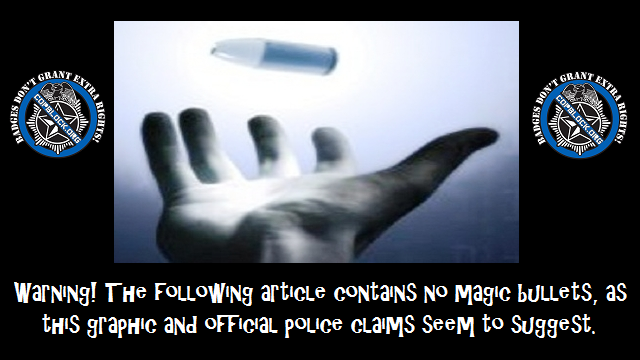 On April 29th, 2015 El Paso Police were responding to a burglary on the block that Erik Salas Sanchez lived on. Police encountered Sanchez at a home which was not the one burglarized, but the one where he lived with his mother. She claims that police arrived at their home and asked her to come out. At this point, for reasons unknown, Erik began to yell at the police.

ABC7 has obtained a copy of the eight page report of Sanchez’s autopsy. The three bullets struck him on both sides of his back and once in the buttocks. All from behind.

It seemed rather impossible to me that a person could be shot three times in the back while running towards the people firing the weapon. But since I have taken a lot of heat from critics for not using factual information or doing enough research, I decided to contact an expert.

Willy the Wizard was the greatest Dungeon Master in my home town precisely because of his ability to decipher the correct outcome of missile weapon engagements. I once saw him roll down a storm of 10,000 fireballs in roughly the same time that it took the games elvish thief to sneak off and acquire a prostitute at the Inn next to the castle we were fighting at. Willy was painting figurines when I arrived and agreed to help me with my research when he saw that I had brought the requisite 12 pack of Mtn. Dew he requires for his services

I began, “Wizard Willy, I come to inquire if it would have been possible for a target to be struck three times in the back by projectiles?”

He rubbed his beard and made a face of deep consternation, “What was the targets race and class?”

“Ah, I see you have brought your wonderful wizard a fine riddle today, Joshua. Was the target in his homeland and was he carrying much in the way of gold or treasures?”

“He was in a distant land, Willy, and it is unlikely that he was adventuring with much in the way of game assets, if I were to guess.”

“Alas, I see it now. So he was poor, Hispanic and in a hostile land. The likelihood of such a character getting struck by missile weapons in the back is certainly high.”

“Yeah, for sure. But here is the main thing, Wizard Willy. The adventurers who shot him claim that they fired at him while he was charging at them.”

“Oh, I see. Did these adventurers carry magical weapons? Were the projectiles enchanted?”

“I do not believe so. I think they were just first level pistols with no charms or other wizardly embellishments.”

“Then it is my expert opinion that there was no way the man was shot in the manner in which the shooters described.”

“That is what I thought, too. So what would you say the chances were that they actually shot him in the back while he charged at them, D20, 1 or less?”

“Oh no, without magic the odds of that happening could not be calculated with a million twenty sided dice. Even in the most fantastical realm. It is simply against the laws which govern the game. Physics. Now if you do not mind, I have campaign maps to draw, may I be of further service or will you be on your way?”

And so having done my research I am ready to report on the facts. El Paso Police Department is lying its ass off. It thought it could get away with murdering a man who failed their attitude test because he was not ‘from around here’. And they will likely to continue to lie even when more facts and wizardly pronouncements come to light, further damaging their fantastic bardly tales. Because that is what cops do. Lie, kill…whatever it takes to survive.