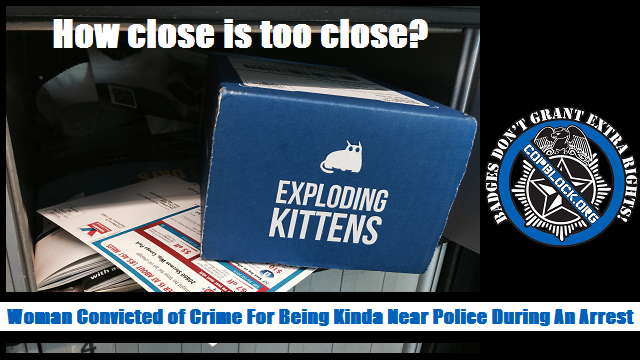 Kimberly Bracken, 30, was riding her bicycle in Pittsburgh when she happened upon the scene of officers arresting a young man for an undisclosed crime. Although she was on public property and approximately fifty feet away from the police and suspect, she was charged with interfering with official acts. Last Thursday (8-27-15) she was convicted of the crime and given a $300 fine.

Police asked the woman to leave the scene several times but she refused these orders because, as she later testified, she thought it was important to witness police activities in case a different perspective on transpiring events was needed to later clarify the incident.

The law states that a citizen may stand witness to or record the activities of public servants so long as it is from a safe distance. In this case, Elizabeth Pittinger, executive director of the Citizen Police Review Board, says that it is up to an officers discretion of what constitutes a safe distance, which was deemed not far enough by Pittsburgh police.

The awful training given to police states that a suspect with a knife is an immediate threat from within 11 feet of an officer. Kimberly was almost five times this distance away, and gave no other indication of being a threat. The only reasonable threat she presented was a possible alternative account of events, which often fails to corroborate the official police narrative.

ABC recently discussed the rash of citizens arrests for merely filming cops, which is their legally protected right. The fact that police are becoming hostile to witnesses with and without cameras is indicative of the climate of the increasingly illegal police behavior, which necessitates quieting all competing narratives in order to prevent transparency and accountability, paradigms criminal cops can ill afford.

As police and their supporters like to remind us, if you aren’t doing anything wrong, you have nothing to hide. Yet the actions of these officers and those nationwide who are criminalizing watching and filming police activities appear to show that cops have much they wish to hide, according to their own logic.

When I was a kid there used to be this saying, “Its a free country.” I never hear anybody say this anymore. It is beyond even the boundaries of irony to make such a statement in a country where you are not free to be in a public space witnessing your public servants protecting you, without facing legal consequences.

When the laws become officer-discretion-based in such a way as to make them so vague and ambiguous that they are impossible to follow while being a responsible citizen in every other regard you know you slipped from ‘free country’ to ‘law enforcement dictatorship’ somewhere along the way.

Free country? I think I know somebody who has something to say about that!

Thank you, Kimberly, for not obeying unjust tyrannical laws in order to see to the safety of your fellow citizens. It is people like you who are my heroes.