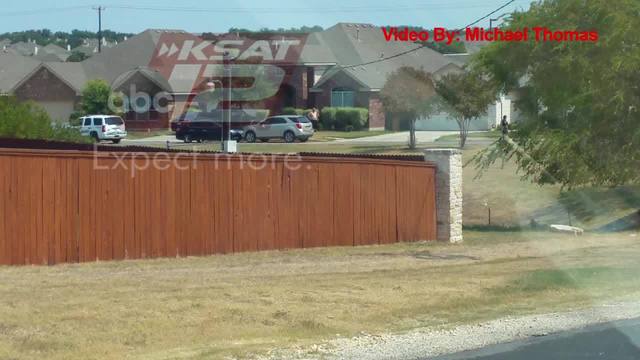 Michael Thomas was conducting his usual business route when he noticed two Bexar County Sheriff’s deputies chasing a man around. That man was later identified as Gilbert Flores and on video (below) it appears he was murdered, with his hands in the air, by still unidentified Bexar sheriff’s deputies. See for yourselves.

From the video you can tell that Flores wasn’t a threat. Not only because he didn’t have a weapon but both of the officers turn their backs to him at some point, as seen in the video. This is a clear indication that he presents no threat to the officers. Nevertheless, the two open fire and Flores falls to the ground. Immediately following the discharge of their weapons neither officer takes a step towards Flores to remove a weapon, administer medical aid, or determine anything at all. Instead, they both take a few steps towards one another and (presumably) exchange some sort of dialogue. Today, members of our local media chose to broadcast online unedited video of a man’s death. KSAT 12 paid a neighbor who filmed the tragedy $100 for the exclusive rights to the video. As a result, people from outside our community have bombarded us with inappropriate comments, and today, physical threats toward our deputies. These deputies have not been charged with a crime and a family lost their loved one. This is unethical and sad. Call KSAT and let them know what you think – (210) 351-1277. If you agree, let the local media know this sort of sensational behavior doesn’t fly in Bexar County.

Let me get this straight:  Two cops get caught committing a crime, and instead of arresting those men and treating them like they would any other possible murderer, the police choose to shame the local news with the most Orwellian double-talk I’ve ever heard? To preach about ethics and sad situations would be nearly hysterical if it weren’t for the loss of life in this case. While the police put out their own little “Call Flood” to the local news, it didn’t faze the station one bit; KSAT 12 recently published “Why Transparency Matters.” Stating:

Nowhere in our reporting have we editorialized or come to conclusions about whether the deputies were in the right or in the wrong. We’re also not under the assumption that the video will tell the entire story. There is no rush to judgment, only an obligation as journalists to share information in the public interest. We believe that judgment should and will come ultimately from the District Attorney’s Office and the FBI.

KSAT 12 respects the difficult decisions law enforcement officers are forced to make daily and recognize that they are often put in dangerous and unpredictable situations. At the same time, they are public servants whose actions and behavior are not beyond scrutiny. It is within this context that we chose to publish the video.

I can most certainly agree with the police being public servants whose actions are not beyond public scrutiny, yet I will be damned sure to give my thoughts on what I saw. And that was another murder caught on video. I also believe that KSAT 12 believed that when they published the video, too. They must have thought the actions of the police were wrong; that’s why they published the video. If it were just your typical traffic stop they wouldn’t have aired or paid for the video. So while I commend them for doing that and not giving in to the officers’ weak call flood, I wish they could stand on the principle of “You’re publicly funded and what you did was wrong.” For now I’m just happy Thomas recorded it and that the news aired it.

Lastly, I’d like to add that I hope the back and forth with butthurt cops and news agencies doesn’t overshadow the fact that there is a major police training issue with officers. They shoot first and cover it up afterwards (and call it “internal investigations”).  The service of protection is clearly out of control with no sign of improving any time soon. So I ask you, “how many more people do they have to kill before you care?”

Because there will be more.